An unexpected pitcher's duel broke out between the teams with the best and worst record in the American League. Max Scherzer out-dueled Jarred Cosart, pitching the Detroit Tigers to a 2-0 victory over the Houston Astros . The win increases Detroit's season-high winning streak to six games.

Scherzer (4-1) also extended his own franchise record with nine strikeouts, becoming the first pitcher in franchise history to start a season with seven plus strikeouts in his first seven starts. That streak is now tied for the third longest in MLB history.

"The recipe for winning is good starting pitching." -Brad Ausmus

The reigning Cy Young recorded his fourth win of the season by shutting out the Astros on three hits over eight innings, not allowing a walk. Joe Nathan pitched the ninth to earn his sixth save.

Detroit had pounded Royals pitching senseless over the weekend, but an offense which had been firing on all cylinders misfired against Cosart (1-3). Over seven innings, the Tigers could only muster one run and four hits against Astros' starter. As good as he was, Cosart wasn't quite good enough, tagged with his third loss of the season.

Held to six hits overall, the Tigers made the most of them. Rajai Davis drove in what proved the be the game-winning run with an RBI single in the bottom of the seventh. Victor Martinez added insurance with a solo home run in the eighth. The only player on either team with more than one hit was Torii Hunter, who had a pair of singles.

The story of the night was Detroit's pitching and defense. The pitching is a given, being it was Scherzer and Nathan on the mound. You expect good performances from them. The Tigers' improved defense definitely stood out, with Austin Jackson and Nick Castellanos making solid defensive contributions. But the defensive star for Detroit was Alex Avila and his throwing arm. A three assist game was Avila's first since August of 2012.

The streaking Tigers have won six in a row, 8-of-10 and 12-of-16. The win gives Detroit an 18-9 record, their .667 win percentage is the best in MLB. The only team with a better start in franchise history is the 1984 World Series winners.

The Tigers out Astro'd the Astros in the bottom of the first.

Facing Jarred Cosart, the Tigers had no one out and runners on first and third after back-to-back singles by Ian Kinsler and Torii Hunter. Looking to start a big inning, Miguel Cabrera tired to beat the shift. Instead, he bounced right to first baseman Marc Krauss, who stepped on the bag and fired to third, where Kinsler (as always) was a TOOTBLAN waiting to happen.

As expected, Kinsler was caught in a rundown, hanging on long enough to allow Hunter to reach third. But what had been a promising inning ended in disastrous fashion when Victor Martinez was caught looking at strike three for the first time in 50 weeks.

Astros had their own misadventure on the bases in the second. George Springer singled off Max Scherzer with two out, and was immediately caught stealing when Alex Avila threw a strike to second.

Through three innings, Scherzer had faced the minimum. That changed in the fourth.

One down, Dexter Fowler singled.  Two out and Chris Carter behind in the count 1-2, Scherzer's fastball tailed inside, nicking the Astros' DH. The threat remained only that when Alex Presley bounced weakly to second to end the inning.

Victor Martinez had not been called out on strikes for almost a year. His streak ended Monday night.

The Tigers had at least one base runner in each of the first three innings and runner in scoring position in two, but could not convert against Cosart.

Bottom of fourth, the Tigers threatened again. Austin Jackson walked with one down, Alex Avila taking a free pass after two were away. But the game would remain scoreless, Andrew Romine grounding out to short.

Thanks to all the Tigers' base runners, it didn't feel like a pitcher's duel between Scherzer and Cozart. But at 0-0 going into the fifth, the scoreboard said otherwise.

Scherzer continued to deal in the fifth. He struck out a pair in a 1-2-3 inning, giving him eight punchouts on the night.

Bottom of five, Cosart was still successfully dodging bullets. A Tiger reached base for a fifth straight inning thanks to a one out plunking of Kinsler.  But his need for a designated runner continued, thrown out stealing second base (with help of a replay challenge by Bo Porter).

The Astros threatened again with two out in the sixth, though it was no fault of Scherzer. Romine bobbled Eddie Gaedel's Jose Altuve's hard-hit one-hopper, scored E-6. The shortest player in MLB advanced to second on a ground ball. No problem, as Scherzer pitched around the error, retiring Jason Castro on a can of corn to left.

"That's usually a good recipe for success when you also do a good job of striking them out and not walking them." -Max Scherzer

The sixth was Cosart's most effective inning of the game to that point, retiring the side in order. The frame included punchouts of Cabrera and Jackson.

Scherzer and Cosart had near identical lines through six full. Scherzer allowed two hits to Cosart's three, but was winning the K (eight to three) and walk battles (zero to two). Both were fine pitch count-wise, Scherzer at 82, Cosart's at 81.

Scherzer got more help from his defense in the seventh. Jackson got on his horse to run down Alex Presley's drive to deep center field (MLB.com video), Nick Castellanos tjhen made a nice play on Springer's bad hop ground ball to third, ending Scherzer's fourth 1-2-3 inning of the night.

Bottom half of the seventh, Castellanos just missed a lead off extra base hit when his line drive landed inches foul in the left field corner. So the Astros being the Astros, they gave Castellanos a gift base to make up for it. They committed their second error of the night when Krauss dropped an on-target throw to first base. A patient Avila worked a full count walk, which got the Astros' bullpen working.

Romine was asked to give himself up, and moved the runners over with a textbook sacrifice bunt.

The bunt forced the Astros to play their infield in. The ploy didn't work, Davis slapping a ground ball to left through the pulled-in infield. Castelllanos scored the first run of the game, finally snapping the scoreless tie.

But the rally ended then and there. Cosart induced Kinsler to bounce into a pitcher's best friend, the 6-4-3 double play. But the Tigers had scratched across a run, taking the first lead of the game at 1-0.

There was action in the tigers' bullpen when Scherzer walked Krauss leading off the eighth. As he passed the 100 pitch mark, Joba Chamberlain and Ian Krol were warming up. A one out single right though Scherzer's wickets off the bat of Jonathan Villar advanced pinch-runner Marwin Gonzalez to second.

But with one out and two on late in a tight game, you know Astros gonna Astro.

A fist-pumping Scherzer bounded into the dugout, his night over after eight shutout innings.

Cosart's excellent night was over was well, pulled after 100 pitches over seven innings. He was replaced by hard-throwing right-hander Anthony Bass.

One down, Martinez extended the Tigers' lead to 2-0 and gave closer Joe Nathan an insurance run thanks to the always welcome big fly. Martinez's liner to right center cleared the scoreboard at the 365 mark for his team leading fifth home run of the season (MLB.com video).

Nathan took over in the ninth, looking for his sixth save of 2014. He proceed to commit a closer Cardinal Sin, walking the lead off man, Fowler. But Fowler took a huge risk which didn't pay off, thrown out by Avila trying to steal second on a pitch in the dirt.

If was fitting a game filled with excellent defensive plays by the Tigers ended on one. Castellanos plucked Carter's foul pop out of the camera pit to close out a well-played and well-pitched game by Detroit Tigers.

Your final score is Tigers 2, Astros 0.

The main focus of game two between the Astros and Tigers will be the MLB debut of Robbie Ray. The young lefty steps into the rotation temporarily in place of Anibal Sanchez, who remains on the 15-day DL with a lacerated finger. Ray was the centerpiece of the Doug Fister trade, and is proving Dave Dombrowski just may know what he's doing by posting a 3-2 record and 1.53 ERA in 29 1/3 innings at Triple-A Toledo.

Brett Oberholtzer toes the slab for the Astros. The left-hander is coming off a pair of rocky starts against the A's and Nationals, allowing 12 runs and 19 hits in only 8 1/3 combined innings. The two game stretch raised Oberholtzer's ERA from a respectable 3.04 to a not-so-respectable 5.63.

First pitch at Comerica Park is set for 7:08 PM.

Michigan Wolverine forward Nik Stauskas said he "would bring the heat" when he threw tonight's first pitch. He has video proof, even if the heat is brought via a basketball.

The prep work paid off, the NBA first round pick-to-be threw a strike.

The Tigers have taken to wearing Zubaz, and visual evidence was given during tonight's game. Mario Imbemba on the FSD broadcast was succinct: "That's not a good look." 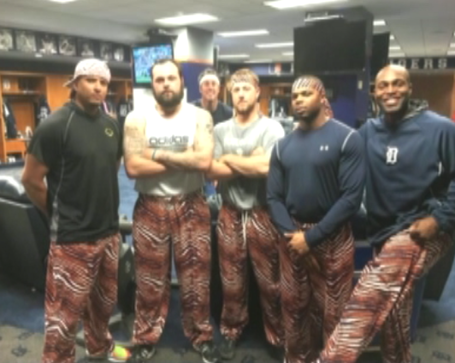 The Frank the Tank "We're going streaking" portion of the recap:

Unfortunately, another streak ended. In the first inning Victor Martinez was called out on strikes for the first time since May 21, 2013. Including the post season, the remarkable streak ended at 154 games. ESPN Stats and Info's research showed Martinez had 261 two strike plate appearances without being caught looking during the streak.

Jose Ortega has been sent down to make room for Robbie Ray.

Victor Martinez: Another game, another huge hit. Martinez. slugged his team leading fifth home run in th eighth. It shows just how good Martinez has been when everyone's jaw dropped when he was called out looking in the first. It was only his fourth K of the season and first looking in almost a year.

Ian Kinsler: A Rangers-esque game for Kinsler - 0-for3, thrown out twice on the bases and bounced into a rally-killing double play in the seventh.

Miguel Cabrera: He almost killed Altuve with a one-hopper, but had an otherwise mundane game - 0-for-4 with a strikeout.

GAME 26 PLAYER OF THE GAME:

Justin Verlander won his fourth game of the season while taking a no-hitter into the sixth inning. That was more than enough to win PotG honors over Torii Hunter and Rajai Davis, taking 57% of the vote.