Was Miguel Cabrera cold or hurt?

Miguel Cabrera historically improves as the temperature rises. Is that the reason for his slow start?

Share All sharing options for: Was Miguel Cabrera cold or hurt?

Miguel Cabrera struggled in April, hitting an uninspiring .277 with a .320 on-base percentage and only two home runs.  May had not yet shown improvement, until he broke out with a 4 for 5 last night.  There are many possible reasons for the slow start.  The first that comes to mind is the unusual (even for Michigan) cold that carried over from winter into spring.  Another is the groin injury that humbled him in late 2013.

If Miggy does not like the cold, we should see that in his performances for just the months of April and September.  Let's look at his wOBA, weighted on-base average, during his time as a Tiger.  I am leaving out his years in Miami, where the average high in April is 79 degrees Fahrenheit.  You can click the graph for a larger view. 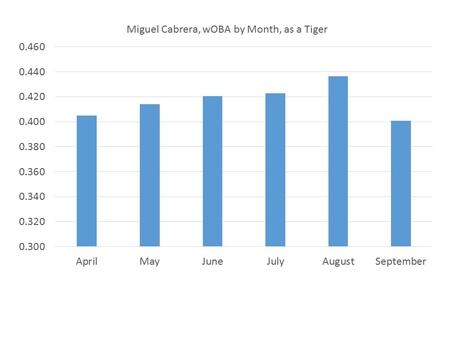 Knowing the rule of thumb for wOBA is that .320 is average and .400 is excellent, it is no surprise to see that Cabrera has been excellent in every month.  But there is a pattern of increasing output as the temperature rises, peaking in August, and then falling off in September.  September has an average high temperature above that of April in Detroit, 74 degrees versus 59 degrees, but more games are played at night when the temperature has dropped from the daily high.  The early conclusion is that Cabrera likes to play in hot weather.

On the other hand, Cabrera's .322 wOBA in April of 2014 is very average and far below even his typical April.  Maybe he is still feeling lingering effects of the injury?  Last September's .329 wOBA was his worst month as a Tiger, slightly worse than September of 2010.  This April's .322 wOBA set a new low.  So let's remove those two months from the data. 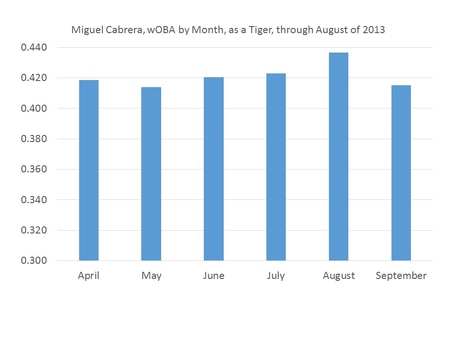 The conclusion is still "just wait for August", but it is not as severe.  All other months bounce around the .420 level.

Cabrera’s best month?  September of 2011, with a wOBA of .536.  Can we get a meteorologist to look up whether that was an unusually warm September?

For encouragement, note that his spring training slash line was .352 / .439 / .611.  Also, he is running the bases far better, as Alex Gordon learned on Sunday.  If a casual fan heard rumors of a slump and then tuned in last night, they would wonder what all the fuss is about.

This leads me to believe that Miggy’s slow start is both injury recovery and temperature related, in addition to other factors.  He may have picked up some bad habits in his swing mechanics or in his pitch selection that still need to be worked through.  Maybe he still feels something down there as the surgery fully heals.  The Astros series leads one to think it could be the quality of opposition.  Whatever the cause, it will be resolved by August.  The forecast for Thursday's day game is 80 degrees.