Ray did everything the Tigers could have asked for him last night and was rewarded with a win in his big league debut.

Robbie Ray pitched in front of 27,939 people at Comerica Park Tuesday night in what was easily the most scrutinized debut for a Tigers pitcher since Rick Porcello took the mound on April 9, 2009. While he did not channel the likes of Bumpus Jones -- who threw a no-hitter in his big league debut back in 1892 -- Ray looked like a regular member of the Tigers' lethal rotation. He allowed one run on five hits in 5 1/3 innings, tallying five strikeouts to just one walk. Beyond the superficial numbers, Ray showed a lot of promise in his first major league start.

Looking at the PitchFX data, the first thing that jumps out at me is Ray's location. Yes, the chart below indicates that he left a lot of pitches over the plate, but the number of fastballs (black dots) in the the strike zone is an excellent sign. Overall, Ray threw 35 of 46 fastballs for strikes (a 76 percent rate) and generated six whiffs for a 13 percent swinging strike rate. There are also a healthy number of changeups (blue dots) in the strike zone, but few sliders (red) and curveballs (yellow). 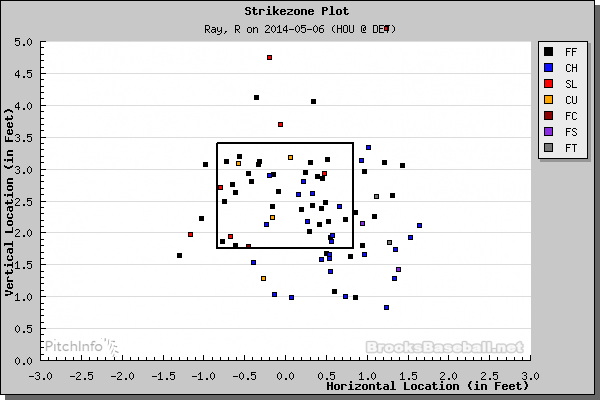 One thing that surprised me about Ray was his willingness to use his changeup in any count. He got slugger Chris Carter to wave over a changeup with runners on first and third base in the first inning, which eventually led to an important strikeout. Ray struck out Carter again in the fourth inning, earning him a chance to go after the Astros' cleanup hitter with runners on base in the sixth inning. Going back to the first, Ray also threw a first-pitch changeup to Jesus Guzman with two outs, resulting in another important 0-1 count. Overall, he got four whiffs on 25 changeups thrown, a healthy 16 percent swinging strike rate.

An impressive part of Ray's debut that did not end up on the stat sheet was his ability to slow down the Astros' running game. He made multiple throws over to first base to keep Dexter Fowler close in the top of the first inning and did not allow a stolen base attempt. This is a stark contrast to Jacob Turner's debut, when the Los Angeles Angels swiped five bases in 5 1/3 innings. Yes, Ray has the added benefits of being left-handed and not dealing with Peter Bourjos, but the constant attention to runners without losing focus on the hitter at the plate was encouraging.

While he looked like a poised big league player on the mound tonight, there were areas where Ray can still improve. He only threw 13 breaking balls -- eight sliders, four curveballs, and a 75 mile per hour "cutter" according to Brooks -- and only hit the strike zone with six. The "show-me" aspect of his breaking ball can be effective at times -- he froze Guzman with one in the fourth inning -- but he would stand to benefit from developing it a bit more. Scouting reports indicate that his curveball is further ahead of his changeup at this point, so it's possible that Tuesday's outing was an outlier in this regard. Either way, three solid pitches are better than two, and a big, looping curveball is an effective weapon for a lefty when located properly.

If you had asked just about anyone at Bless You Boys what the best realistic scenario for Ray's first start would be, that debut was probably your answer. He located his fastball, didn't get hit hard -- only three of his five hits allowed left the infield -- and put the Tigers in a position to win. It is important to remember that one impressive start doesn't lead directly to stardom (remember Andy Oliver?), but for one night, Ray proved that the Tigers' future is still as bright as its present.