Are you a true baseball fan?

What kind of baseball fan are you? Casual? Regular? Can't-get-enough? Here's a useful quiz to help you find out.

Share All sharing options for: Are you a true baseball fan?

For centuries, baseball has been the national pastime, and it would not be an exaggeration to say that, in the 21st century, literally dozens of people still enjoy the sport today. But there is a wide spectrum of baseball fandom, ranging from the casual observer who tunes into games on weekends, to the obsessive fanatic who has actually created a member account on an Internet baseball forum.

How serious of a baseball fan are you? Take the quiz below to find out.

In preparation for an upcoming game, you

A. Read the morning news to see who the probably pitchers are

B. Check the current standings to see how the teams are doing

C. Open 24,000 browser windows and point them to Twitter, Baseball Reference, Fangraphs, ESPN, MLB, SBNation, etc., and obsessively refresh the pages like a madman until the opening pitch is thrown

When it comes to the designated hitter rule, you

A. Really don't have an opinion

B. Would like to see a change one way or the other, but it doesn't keep you awake at night

C. Have convictions that rise to the level of religious dogma, and have personally been involved in fist-fights with those who disagree with you

When the baseball season is over, you survive the offseason by

A. Watching football, hockey, basketball, and any other sport you can find on TV

B. Catching up on books, movies, and spending time with friends/family

C. Returning to your cryogenic chamber, issuing strict instructions not to be disturbed until Opening Day

Your favorite baseball team is

A. The one you are geographically closest to

B. The one you grew up rooting for as a child

On the subject of incorporating social media and the Internet to enhance your enjoyment of games, you

A. Pine for the good ol' days when games were on the radio and stats were on baseball cards

B. Think the Internet is useful for getting real-time baseball news and information 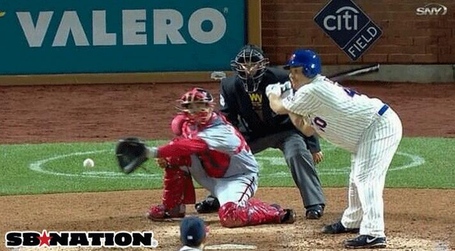 It's time to watch the World Series, and you favorite team didn't make it this year. You're rooting for

A. Whoever the American League team is

B. Whichever team has the most inspirational story arc

C. A flaming meteor to strike the stadium and wipe out both teams

There is an important inter-divisional game on television, but you're supposed to be at your daughter's wedding. You

A. DVR the game and go to the wedding

B. Go to the wedding, but frequently check the game score on your "Smart Device"

C. Send your "Smart Device" to the wedding in your place, and just have them Skype you in when it's time to give away the bride

Your team lost a close game when the bullpen blew the lead and the offense left two runners in scoring position in the ninth inning. Your reaction is

A. Blame the bullpen

B. Blame the weak offense

C. Consume enough alcohol to incapacitate an African Bush Elephant, then log onto an Internet message board and leave multiple angry posts about the state of this team, never realizing you accidentally signed into a "Mothers of Preschoolers" forum

You're at the stadium watching a close game in late innings, when you feel the urge to use the restroom. You

A. Politely leave your row, being sure not to step on anyone, apologizing to everyone as you pass

B. Wait to leave until the pitcher is between pitches, so none of your seat mates miss any action

C. Remain in your seat and proudly piss yourself while humming "The Battle Hymn of the Republic," because a true American baseball fan never leaves his seat until the game is over

How to score: first, take her to a nice restaurant and compliment her outfit, then try to keep and maintain eye contact during the ensuing conversation, and after a few drinks, if she invites you back to her place ... sorry, wrong article.

Whether you selected the "A," "B," or "C" option on any of these questions, it doesn't really matter, because you just spent five minutes taking a baseball-related quiz on the Internet, and this is proof enough that you're a die-hard fan who quite possibly hasn't spoken to a friend or family member since the start of the 2014 season.