Brad Ausmus used the term "flat" several times in his post-game presser, describing the Tigers' effort in getting shut out on three hits by Mariners rookie left-hander Roenis Elias. The Tigers lose 2-of-3 to the Mariners, finish the west coast swing 3-4.

Having played 17 consecutive days and 29 games in 30 days, a running-on-fumes Detroit Tigers team showed all the energy and urgency of an octogenarian sloth, dropping the series finale to the Seattle Mariners 4-0. Detroit wraps up the west coast swing 3-4, thanks to dropping 2-of-3 to the Mariners.

I don't want to go as far as saying the Tigers mailed one in, as good pitching will make a team look as if they are doing just that. But this was not an encouraging offensive performance. In being shut out by Mariners rookie starter Roenis Elias (W, 4-4), the overwhelmingly right-handed-hitting Tigers dropped their third straight game on the road trip against left-handed pitching.

"Just one of those days where we made quick, easy outs, and didn't put up much of a fight." -Brad Ausmus

In just his 12th career start, Elias was dominant. He allowed just three singles in a complete game shutout, striking out eight and walking only one.

Max Scherzer (L, 6-2) pitched better than he did in his last two starts, but he still labored for long stretches. Scherzer was pulled after 6 2/3 innings and 116 pitches, allowing four runs on nine hits, striking out seven.

The Mariners got all the offense they needed in the first inning on Michael Saunders RBI double. Willie Bloomquist and James Jones added RBI hits in the fifth. Brad Miller's solo home run in the seventh made for the 4-0 final score.

"When you play 162 games, you're going to have bad games. This was one of them." -Max Scherzer

The Tigers had no offense to speak of with just three singles and only one base runner advancing as far as second base.

Let's hope the off day gets the Tigers back on track. I think everyone, including the fan base, needs a day off from the game of baseball. When Brad Ausmus uses terms such as "flat," "not putting up a fight," and not getting the "energy flowing" to describe a mail-it-in loss, it doesn't bode well.

What else doesn't bode well? The Blue Jays arrive in town for three games playing like the Tigers were three weeks ago.

In his past two starts, Max Scherzer was unable to keep the opposition off the scoreboard in the early innings. That trend continued today, the Mariners taking a first-inning lead.

Endy Chavez led off the bottom of the first with a double, then scored on Michael Saunders one-out double. Scherzer would strand Saunders from there, but the Tigers found themselves in a 1-0 hole after one inning.

The Tigers threatened against Roenis Elias in the top of the second, but failed to score. Victor Martinez led off with a walk, taking second on Nick Castellanos' two-out base-on-balls. But the Tigers' offensive struggles continued, Bryan Holaday ending the inning on a comebacker.

Their pitcher did a good job; there was no trigger to get the energy flowing. -Brad Ausmus

Bottom of three, Scherzer found himself in another jam, allowing back-to-back singles by Willie Bloomquist and Chavez to start the inning. The Tigers managed to pull off an inning-ending double play the hard way. Scherzer struck out Saunders swinging, Chavez took off for second. When Holaday threw to second, Bloomquist took off for home on the delayed steal. Chavez was safe, but Bloomquist was nailed on Danny Worth's on-the-money throw.

M's skipper Lloyd McClendon burned up his challenge on the play, replays showing the call was correct. 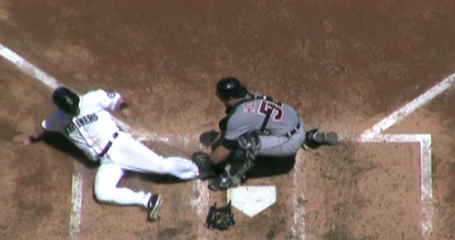 While Scherzer was pitching in and out of trouble, Elias was having no such issues, holding the Tigers scoreless through five innings on one hit. After Castellanos reached base in the second inning, Elias retired nine straight Tigers before Holaday singled with two down in the fifth. Worth bounced out to end another scoreless inning

Tigers are struggling on offense against a mediocre left-hander. Seems like we've seen this game before.

Tigers down 3-0 thru 5. Have just 9 hits and 1 run in last 14 innings vs Mariners pitching. Young & Elias have completely shut them down.

Speaking of struggling, Scherzer had more trouble in the fifth. Bloomquist was killing the Tigers, driving in his third run in two games with a one-out double plating Dustin Ackley. Scherzer allowed a second run when James Jones' single drove in Boomquist.

Down 3-0, the Tigers continued to flail about helplessly against Elias, going down 1-2-3 in the sixth.

"Today, I just thought we were flat." -Brad Ausmus

Bottom of six, Scherzer kept the Mariners off the scoreboard despite allowing his eighth hit of the game. Having allowed three runs through six, Scherzer was tracking for his first quality start since beating the Red Sox on May 16. But thanks to Scherzer laboring his way through 105 pitches, it sure didn't feel like it was a "quality" performance by the reigning Cy Young.

The Tigers having gone down in order against Elias in the seventh, Scherzer returned to the mound for what was likely his last inning. The quality start went out the window when Scherzer proceeded to serve up a no-doubt solo home run to .159-hitting shortstop Brad Miller.

Down 4-0, Phil Coke took over from Scherzer with two down in the seventh. Scherzer exited having thrown 116 pitches, tying his season high.

Coke found himself in a jam, thanks to Castellanos booting Chavez's ground ball and a Jones broken-bat single. Coke would get of the inning without allowing a run, but the Tigers were down 4-0 and running out of time.

"It's a losing trip instead of a winning trip, not too excited about that," -Brad Ausmus

Elias continued to dominate Detroit batters in the eighth. He did plunk Worth with one out, but Rajai Davis bounced into an inning-ending double play.

Top of nine and the Tigers still down 4-0, McClendon allowed Elias to go for the complete game. He did so in style, retiring Kinsler, Cabrera and Martinez in order to cap off a dominant, complete-game, three-hit shutout.

A miserable game over. Your final score is Mariners 4, Tigers 0.

The less said about this game, the better.

Monday is a badly needed off day for the Tigers, who begin a six-game home stand (13 of the next 17 games are at home) Tuesday night. The first series is three games with the smoking-hot Toronto Blue Jays, who rode a 21-9 May record to the top of the AL East.

We're back to games being played at the start times the Baseball Gods intended. Tuesday's first pitch at Comerica Park is scheduled for 7:08 PM.

Seems Endy Chavez is taking batting tips from Bartolo Colon. The pitch was a called strike. 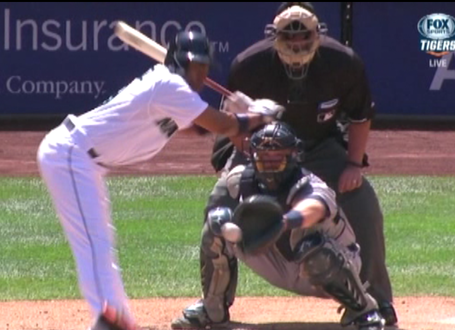 The window has passed on a Lloyd McClendon drinking game in Detroit, but it's not too late for Seattle fans.

If a Lloyd McClendon drinking game existed, his walking off with a base = Rod Allen chasing a pitcher in Japan. pic.twitter.com/Hox1boctsP

The bullpen: Phil Coke and Corey Knebel shut out the Mariners over the final 1 1/3 innings.

The Tigers offense: Not sure whom or what to blame (are we still blaming the plane or the Zubaz?), but to say the Detroit offense went off the rails over the weekend is an understatement. In the last two games combined against the Mariners, the Tigers scored a mere two runs on nine hits.

Max Scherzer: Labored into the seventh, giving up four runs over 6 2/3 innings. Actually, that's Scherzer's best game since beating the Red Sox on May 16. Over his last three starts covering 16 2/3 innings, Scherzer is 0-1 with an ERA of 7.32.

GAME 52 PLAYER OF THE GAME:

Miguel Cabrera's two hits, one a two-run home run, topped the bullpen contingent in the PotG balloting, taking 76% of the vote.