The Tigers hit three home runs, but were unable to overcome three errors and a mediocre outing from Rick Porcello in a narrow loss to the White Sox.

The Detroit Tigers hit three home runs, but it wasn't enough to beat the Chicago White Sox in a 6-5 loss. After winning two straight, the Tigers lost for the second straight night, and have now dropped seven-of-nine and 15-of-21.

White Sox starter Hector Noesi allowed four runs, all coming off three home runs, but hung around long enough to earn the win. Noesi was pulled after 5⅔ innings, having allowed the four runs on seven hits, walking one and striking out five.

Robin Ventura would use four relievers on the night. Ronald Belisario allowed a run, but stranded the tying score on third to record his sixth save.

It was another rocky start for Detroit starter Rick Porcello. He was pulled after pitching to one batter in the sixth, charged with six runs allowed, five earned, on nine hits, walking one, striking out only one and committing a throwing error. His ERA now at 4.04, Porcello's breakout season is starting to look like just another Rick Porcello season.

Corey Knebel allowed inherited runners to score, which would turn out to be the winning margin. Ian Krol and Evan Reed closed out the game with a couple of scoreless innings.

The top of Chicago's order did all the damage, the first four hitters combining for a nine-for-18, six RBI, four runs scored night. Jose Abreru led the White Sox's 11-hit attack with a double, home run (18th on the season) and two RBIs. Gordon Beckham had three hits and an RBI, Conor Gillaspie two hits and two RBIs, Adam Eaton two hits and one RBI.

Detroit starts 14 consecutive games against their Central rivals with a loss. The cushion built up over the early weeks of the season has helped the Tigers maintain their lead in the Central. But the smoking hot Indians have won three straight, are 9-1 in their last 10 and now loom just two games back. That 14-game stretch will end with three games in Cleveland June 20-22.

I suggest you put on a helmet. It's going to be a bumpy two weeks.

Bottom of one, J.D. Martinez went for the all-or-nothing play ... and got nothing. Martinez failed to use Austin Jackson as a role-model, and made a half-hearted diving attempt on Adam Eaton's looping liner down the left field line. The ball skipped by him, rolling all the way to wall. By the time Martinez got the ball back into the infield, Eaton was standing on third base.

Gordon Beckham followed with a one-hopper which caromed off Porcello's leg like a pinball, rolling past Ian Kinsler for an RBI single. Porcello settled down and retired the next three Chicago batters, but two batters into the game, the Tigers were down 1-0.

White Sox starting pitcher Hector Noesi is the epitome of a journeyman. He's posted a 5.29 ERA while pitching for three teams in 2014 (Mariners, Rangers, White Sox), was sold once and also been placed on waivers. So it would figure the first seven Tigers would go down in order.

One down in the third, Alex Avila snapped that streak by beating the shift with a ground ball single to left. That's where he would remain, Noesi striking out Eugenio Suarez and retiring Ian Kinsler on a fly ball.

Porcello found himself in more trouble in third. Tyler Flowers set the tone for the inning with an 11 pitch at-bat, ultimately working a lead off walk. One down, the troublesome Beckham doubled, Flowers holding up at third. The Sox then pushed their lead to 2-0 on Conor Gillaspie's single.

Porcello pitched out of further trouble thanks to his best buddy, the double play. But the White Sox had done a good job of working Porcello, as shown by a pitch count of 52.

Cabrera woke up the Detroit offense when he smashed a no-doubt solo shot deep into the left field stands. His 12th home run of the season pulled the Tigers within a run at 2-1 (MLB.com video).

J.D.Martinez kept the inning alive with a two out single, but Gillaspie robbed Castellanos of extra bases thanks to a leaping grab at third. Castellanos had hit the ball hard twice, with nothing other than an 0-for-2 for his trouble.

Two down in the fourth, the Martinez's combined to needlessly extend Porcello's inning. Dayan Viciedo ripped a line drive directly at J.D. Martinez, for what should have been the third out. But the ball badly handcuffed the Tigers' left fielder, resulting in a two base error.

Alejandro De Aza followed with a ground ball to the right side, Victor Martinez booting the dribbler for the second striaght error by a Martinez. The White Sox nipped their own rally in the bud by hitting a ball to a Tiger not named Martinez. Flowers bounced to Castellanos, who didn't commit an error on the play, ending the inning.

So far, Eugenio Suarez is finding big league pitching to his liking. Two down in the fifth, the rookie hit his second home run in three games, a wall scraper which caught the first row of seats in left. The solo shot knotted the game at 2-all (MLB.com video).

It wouldn't remain tied for long.

The White Sox pounded Porcello for four consecutive one out hits in the bottom of the fifth, scoring three runs. The rally was capped off by Jose Abreu's two run homer, pushing the White Sox's lead to 5-2.

The Tigers bounced right back with a two run shot of their own. Cabrera on base with a single, Victor Martinez jumped all over a Noesi fastball, drilling a line drive over the right field fence. His 15th big fly of the season pulled the Tigers within a run at 5-4 (MLB.com video).

A double off the bat of J.D. Martinez and a walk to Austin Jackson ended Noesi's night. Robin Ventura brought on lefty Scott Downs to face Avila. Three pitches and a ground ball later, the inning was over.

Porcello ensured the end of his own night when he made a huge mental error. De Aza laid down a prefect bunt for a base hit, but Porcello tried to make a play that just wasn't there. He bare-handed the ball, then tried a ridiculous off-balance, sidearm throw which would have landed in Lake Michigan if the stands hadn't been in the way. 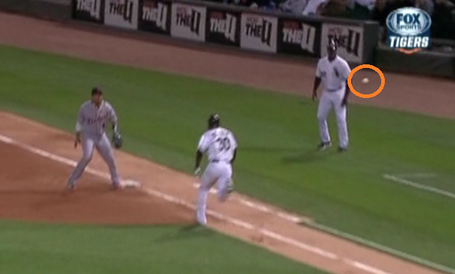 De Aza strolled to second on the third Detroit error of the night.

Brad Ausmus pulled the plug on Porcello, Corey Knebel taking over. Eaton didn't hit the ball hard, but his opposite field dribbler somehow got through the left side for an RBI single.

Kinsler bailed out the rookie reliever by making a diving stop on Beckham's hard hit ball up the middle, startinf an inning ending 4-6-3 double play. But heading into the seventh, the Tigers found themselves down two runs at 6-4.

The seventh inning had a mailing-it-in feeling to it. Jake Petricka retired the Tigers in order on three ground balls.

Ian Krol pitched the seventh, loading the bases with two out thanks to an Abreu double and a pair of walks, one intentional. Krol pitched out of the jam of his own doing, De Aza ending the threat by flying out to center.

Top of eight and one out, Victor Martinez remained an unstoppable force of nature, doubling to left.  Unfortunately for the Tigers, they are lacking in forces of nature after the cleanup spot.Zach Putnam entered the game, striking out both J.D. Martinez and Castellanos to end the scoring threat.

Evan Reed pitched the bottom of the eighth, retiring the side in order, two via strikeout.

The Tigers were down to their last three outs and facing White Sox closer Ronald Belisario. Jackson hit the ball hard, but caught a huge break when Moises Sierra lost the ball in the lights. Instead of the first out, Jackson had a gift double.

Avila followed by launching a fly ball to deep left. De Aza appeared to leap too early, the ball bouncing off the fence to an RBI double.

Rajai Davis entered the game to pinch-run, advancing to third on Suarez's fly ball to center. One out, the tying run just 90 feet away, and the top of the order was due up.

Kinsler was punched out looking on a borderline pitch, a livid Ausmus going off on the call.

Down to their last out, Torii Hunter pinch-hit for Kelly, He left the dugout swinging from the heels, falling down in the box twice before ending the game on a chopper to third.

Verlander is in a similar funk as last season's, making mechanical adjustments to amp the velocity on his fastball. Verlander's last start had more downs than ups, allowing five earned runs and eight hits, striking out only four in a 7-3 loss to the Blue Jays.

Cabrera's home run in the third was the 377th of his career. He's now tied with Norm Cash and Jeff Kent for 69th in MLB history.

The big fly was also Cabrera's 239th as a Tiger, tying him with Rudy York for seventh in franchise history.

Eugenio Suarez hit a home run, the second of his four game long MLB career. As well as he is playing, this tweet from Tigers PR is sobering.

Victor Martinez topped his 2013 home run total by hitting his 15th of the season in the sixth. Despite it only being June, Martinez has his highest home run total since hitting 20 with the Red Sox in 2010.

Eugenio Suarez: Baseball won't remain this easy for the rookie, but at the moment he's become one of the most fun Tigers to watch play. With his second career home run tonight, Suarez is hitting .364/.417/.909 in four big league games.

Miguel Cabrera: An average game for Cabrera is a highlight for many players -- Two hits, one a home run, and two RBIs.

Victor Martinez: A double, home run, and two RBIs. Martinez has 15 doubles, 15 home runs, and 15 strikeouts on the season.

Rick Porcello: Not the best of outings against a team Porcello normally has little trouble against. A year that looked to be a breakout season for Porcello is now looking like a typical season. By allowing six runs tonight, Porcello's ERA is up to 4.04, close to his career norms.

Tigers team defense: J.D. Martinez had major issues in left, Victor Martinez played first like a DH, and Rick Porcello made one of the most ill-advised throws you'll ever see.

GAME 59 PLAYER OF THE GAME:

On top of a pair of RBI singles, an impressive Eugenio Suarez made all the defensive plays at short in the Tigers' 5-3 loss to the Red Sox. The rookie shortstop earned 52% of the vote to take PotG.