David Ortiz vs. Joaquin Benoit: a million chances to get it right

Share All sharing options for: David Ortiz vs. Joaquin Benoit: a million chances to get it right

When David Ortiz did the unthinkable in Game 2 of the 2013 ALCS — hitting a game-tying grand slam against Joaquin Benoit in the bottom of the eighth inning — some of us lost our minds. Most of us just shook our heads in disbelief, while others angrily responded that this was symptomatic of a larger problem. Namely, that the Tigers lacked a "proven closer."

The front office seemed to more-or-less agree, because Benoit was allowed to leave Detroit in the 2013 offseason without so much as a qualifying offer, and Joe Nathan was purchased off the open market for a hefty sum of money.

When the grand slam happened, I wrote a post for Bless You Boys, dissecting the event and highlighting the utter randomness of the whole thing. A lot of variables had to fall into exactly the right place in order to produce that outcome. Instead of starting Ortiz off with a fastball, Benoit threw a changeup for the first pitch. Instead of expecting a first-pitch fastball and getting out in front of it, Ortiz said he was anticipating an off-speed pitch. That's a lot of bad luck already, and that was just on pitch selection.

For months now, I've been nagged by the thought that Benoit should have been able to retire Ortiz for the final out of the inning, and indeed, would have retired Ortiz in a majority of cases. But I didn't have the numbers to prove it.

Recently, however, while playing a game of Strat-O-Matic with my son, I had the necessary epiphany required to take the next step toward settling the issue — concretely and with hard statistics — in my own mind.

Strat-O-Matic is a card and dice-based baseball game. Every batter has his own card, and every pitcher has his own card. When my team is batting, I roll a white die and two red dice, the white die determining which card (pitcher or batter) is used, and the sum of the red dice determining the outcome. Here are Joaquin Benoit's and David Ortiz's cards for 2013: 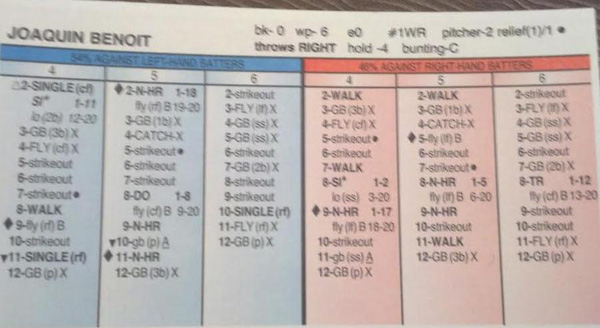 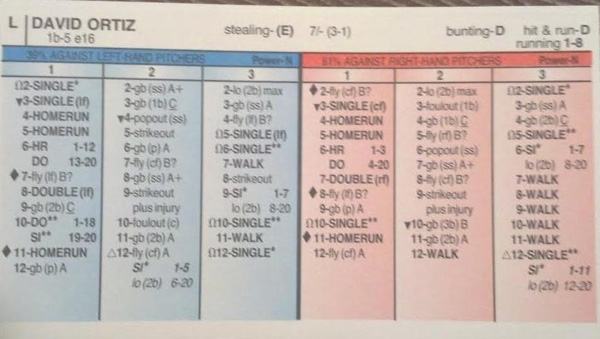 So, for example, if I roll a four on the white die, I have to look at Benoit's card for the outcome (in this case, the blue columns are used because Ortiz is a left-handed batter). If the sum of the red dice was 11, the outcome of the at-bat would be a single (and, with the bases loaded, a run scored).

The makers of Strat-O-Matic pride themselves on providing a highly realistic game experience, and these batter/pitcher outcomes are heavily based on the statistics for that particular year. So here was the opportunity for me to settle the question once and for all.

I wrote a computer simulation program based on these player cards, and ran the results for a million encounters between Ortiz and Benoit. Here is what the simulation produced:

So there it is: A grand slam was certainly a possibility in this particular pitcher/batter matchup, but it was going to happen less than one every 10 times. A walk was more likely to occur, and a harmless, inning-ending out was by far the most likely outcome.

We all know what actually happened, but perhaps now at least I can sleep at night, knowing that the result was largely rooted in bad luck, and the numbers bear that out.