Kyle Gibson did not pitch well in his last outing against the Tigers. He will look to rebound tonight while Drew Smyly pitches for Detroit.

Share All sharing options for: Game 63 Preview: Twins at Tigers

The last time the Tigers faced off against Kyle Gibson, I noted that he tends to nibble at the edge of the strike zone and rarely goes after hitters. This did not play out in that particular outing, but only because Gibson left a lot of pitches out over the plate. Naturally, that did not end well for him. The Tigers tagged him for six runs on seven hits and a walk in just two innings. It was the second time this year that Gibson had given up at least six runs in three innings or fewer. 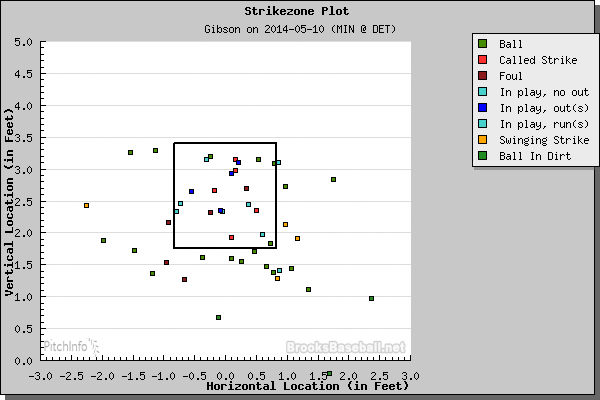 Since then, things have gotten better for Gibson. He has a 2.90 ERA in his last five starts, but has been somewhat of a "feast or famine" pitcher during this stretch. Of the 10 runs he has allowed in his last 31 innings, nine came in two starts. It is worth noting that both of those starts came on the road, bumping his ERA away from Target Field to 7.39. He has a 1.54 ERA in six home starts this season. The peripheral numbers bear out a large discrepancy as well. His 5.08 road FIP is much higher than the 2.96 figure at home, and he is allowing a .363 wOBA in away games. An interesting tidbit: of his six road starts, only one — his last outing at Milwaukee — was in a true hitter's park. Everything else ranks as fairly neutral (Detroit, Cleveland) or very pitcher-friendly (San Francisco, Tampa).

Drew Smyly was originally slated to start Wednesday, but Tuesday's rainout gave the Tigers an opportunity to skip Smyly's turn through the rotation. Instead, Brad Ausmus decided to push Smyly back a couple games, giving Anibal Sanchez and Rick Porcello an extra day's rest. Ausmus cited a desire to keep Smyly and Porcello from pitching on back-to-back days, which makes sense considering they average the fewest number of innings per start.

The extra rest could prove to be an obstacle for Smyly, who has struggled in the past when he has too much time off between starts. In his career, he has allowing opposing batters to hit .253/.336/.495 and he has a 4.38 ERA. However, his numbers against the Twins are stellar, so something will have to give. He is 2-0 with a 1.93 ERA and .593 OPS allowed against the Twins in his career. However, those numbers are padded somewhat by 10 relief appearances against them in 2013.

Smyly's numbers against lefties continue to be stellar. Meanwhile, righties have an .874 OPS against him, which is part of the reason why Trevor Plouffe has done plenty of damage against Smyly. Both of Plouffe's hits in six at-bats are doubles, and he has also drawn a walk. Brian Dozier also has a double and a pair of RBI. Kendrys Morales, who signed with the Twins last week, is hitless in four at-bats. Joe Mauer has been unable to solve Smyly from the left side of the plate, and has been struggling overall in 2014. He is hitting just .263/.342/.336, all of which are by far the worst figures of his career.

The last time the Tigers and Twins faced one another, the Twins took two of three games at Comerica Park. This was followed by a six game winning streak in Baltimore and Boston, so fans did not think much of the series loss to a division rival. A lot has changed for both teams since their last meeting, but this one still comes down to starting pitching. Gibson needs to be much better against the Tigers than he was last time. Getting back to pitching around the corners should help, especially since the Tigers swing at such a high percentage of pitches outside the strike zone. Smyly, on the other hand, just needs to work efficiently. He was excellent in his last start against the Boston Red Sox and has nine strikeouts to two walks in his last two outings.