The Tigers managed just one run and five hits against four Royals pitchers, wasting an excellent outing from Drew Smyly. A third straight loss in what was supposed to be an AL Central showdown drops the Tigers 1 1/2 games back of the first place Royals.

The Detroit Tigers month-long death spiral continued with a 2–1 loss, dropping their third straight game to the Kansas City Royals. With the loss, the Tigers fall 1½ games back of the first place Royals. The win guarantees Kansas City will leave Detroit on top of the AL Central.

Kansas City remains white hot, winning their 10th-straight game. Detroit remains the complete opposite of white hot, not only losing their third-straight to the Royals, but also falling to 5–11 in the month of June and a horrific 9–20 (a .310 winning percentage) since topping out at 15 games over .500 on May 18. The sample sizes between 27–12 and 9–20 is slowly shrinking.

Royals' starter Jeremy Guthrie won a pitcher's duel with Drew Smyly, raising his record to 4–6 by holding the Tigers in check over 6⅔ innings. Guthrie gave up just one run on four hits, striking out a season high nine batters. Three Royals relievers held the Tigers to one hit over the final 2⅓ innings, Greg Holland pitching a scoreless ninth to record his 21st save.

Smyly pitched extremely well for a third-straight start, but also lost his second straight game. Now 3–6 on the season, Smyly was pulled one batter into the eighth, allowing just two runs on seven hits, striking out six while not allowing a walk. Joba Chamberlain and Ian Krol each tossed a scoreless inning, keeping the Tigers in the game, but the offense was unable to mount a comeback.

Former Tiger Omar Infante led the Royals at the plate with two hits, including his fourth home run, a solo shot in the fifth which would turn out to be the winning margin. Alex Gordon drove in the Royals' first run with an RBI infield single which took a friendly hop off of second base.

J.D. Martinez remained smoking hot for Detroit with two hits, driving in Detroit's only run with his fifth home run of the season. Save for Martinez, the Tigers' offense was nowhere to be found. Against four Royals pitchers, the other eight Tigers could only manage three hits, while striking out 13 times.

Things have gotten so bad for the Tigers, even Brad Ausmus' attempts at humor blow up in his face.

Ausmus was asked how he deals with the losing when he goes home: "I beat my wife." Obviously was joking and he later apologized.

Ausmus should expect some kind of backlash (possibly a significant fine) for what was an off-the-cuff comment made in very bad taste.

Drew Smyly: Typical of the Tigers' performance over the past month, when one part of team clicks, another disappoints. Smyly deserved better, pitching more than well enough to earn a victory. But Detroit's offense was MIA, scoring just once with the young lefty on the mound. By pitching to one batter in the eighth, Smyly recorded his longest outing of the season. He previously went seven full inning against the Royals back on May 3.

J.D. Martinez: Continues to make a case to remain on the 25-man roster whenever Andy Dirks is deemed healthy enough to be activated. Martinez supplied almost all the Detroit offense with two hits, one a solo home run (number five on the year). Considering Torii Hunter has completely stopped hitting (and is injured to boot) and Rajai Davis has regressed to the mean (especially against right-handers), Martinez is the only corner outfielder who is supplying the team with offense from a position which requires it. Don Kelly has to be worried about his roster spot. Martinez is going to regress as well, but he gives the Tigers something Kelly can't — a power bat, be it in a platoon role or coming off the bench.

Joba Chamberlain: Entered the game in the eighth with no one out and a runner on first. Chamberlain allowed a single to Omar Infante, but struck out Eric Hosmer and induced Billy Butler to bounce into an inning-ending double play. Chamberlain remains lights out in his eighth inning role.

Ian Krol: Has been kept on the shelf since complaining of a sore shoulder over the weekend. Krol returned today to pitch the ninth inning, allowing only a single in a scoreless inning of work.

The Tigers offense: Did absolutely nothing against Guthrie, held to just two hits before Martinez went yard with one down in the sixth. The Royals' starter entered today's play with a K/9 ratio of 4.9 on the season. He nearly doubled his season average today, the Tigers going down on strikes nine times over Guthrie's 6⅔ innings. When the Tigers get little from Cabrera and Martinez, no one other than J.D. Martinez has stepped up.

Miguel Cabrera: Has been pitched around for much of the series (three walks in the first two games), but has otherwise been a non-entity offensively. Cabrera had his first hit of the series by bouncing a single up the middle in the ninth, now 1-for-8 against the Royals.

Victor Martinez: Carried the Tigers' offense in the first two games, but came up short today — 0-for-4 with two strikeouts.

Alex Avila: Rough game at the plate, 0-for-4 with two more strikeouts.

J.D. Martinez's luck: He's 6-for-11 in the series, but the Royals' outfield defense has robbed him of three base hits over the past three games. Robbery number three went down in the fourth inning when Alex Gordon laid out to rob Martinez of an RBI single.

Weather: Just as the game ended, severe thunderstorms began to cross southeast Michigan. About three hours too late to save the Tigers, unfortunately.

This series (and the past month, for that matter) was encapsulated in a nutshell on the Royals first score. First inning, two out, and Eric Hosmer on second after a single and stolen base, Alex Gordon hits what appears to be an inning-ending dribbler up the middle, Eugenio Suarez is all set to make the play, but the ten-hopper hits the bag, caroming into right field for an RBI single. 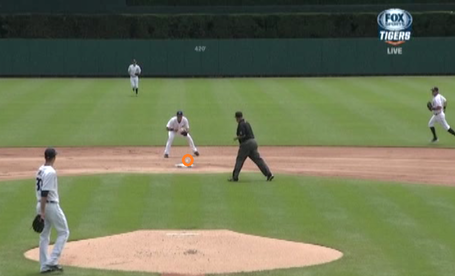 WHAT DID WE DO TO THE BASEBALL GODS?

If the Baseball Gods exist, they were laughing heartily after that ridiculously lucky play.

Of course, when Victor Martinez tried bunting in order to beat the shift in the second, the ball rolled foul, missing the third base bag by an inch. 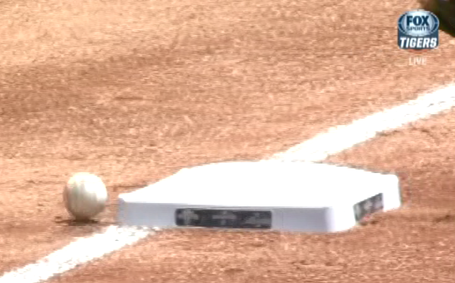 Pretty much sums up the past month.

For the first time this season, Victor Martinez struck out in his first two at-bats. His home run to strikeout ratio is now 17/20.

Over his last three starts, Drew Smyly has a 1.89 ERA, four runs allowed in 19 innings, striking out 12. Despite Smyly's sterling numbers, the Tigers were victorious in just one of those three games.

Omar Infante has turned into a Tiger Killer over the three games. The ex-Tiger homered in the fifth, giving the Infante eight RBIs in 12 at-bats in this series

Despite right-handed Jeremy Guthrie on the mound, Brad Ausmus slotted Rajai Davis in the lead off slot today. Davis entered the day hitting .237/.256/.289 for the month of June, and has a season OPS of .683 versus right-handed pitching. To no one's surprise, Davis was 0-for-4 with two strikeouts.

The Tigers were hoping to turn things around during a stretch where they would play 13 of 16 games at home. There's been no turnaround in sight. Tigers are 5–10 with one game remaining before they leave town for nine games.