Anibal Sanchez continues to be the Tigers' best starting pitcher, shutting down the Royals on one run over seven innings. Joe Nathan struck out the side to earn the save. J.D. Martinez homered for the third time in four games.

In a pitchers' duel between Anibal Sanchez and Danny Duffy, the Detroit Tigers snapped a pair of streaks while avoiding a sweep by the Kansas City Royals with a 2–1 victory. The Tigers ended their own three-game losing streak while stopping the Royals' winning streak at 10. The victory pulls the Tigers within a ½ game of the Royals in the AL Central race.

"The most encouraging thing was the way Joe threw at the end. That looked like Joe Nathan of a year ago." -Brad Ausmus

Detroit didn't get much offense on the day, as they were outhit 6–4 by the Royals. But the Tigers don't need much offense when Sanchez is in stopper mode. Sanchez has been the best Detroit starter since their fall from grace began in mid-May. Today was no different. Sanchez won his fourth game of the season by twirling seven innings of one-run ball. Sanchez managed to shut down a smoking-hot Royals' offense, despite not striking out a single batter.

Given the job of maintaining a one-run lead, the Tigers' bullpen was up to the task. Joba Chamberlain pitched a scoreless eighth, and Joe Nathan earned his 14th save, bouncing back from a lengthy string of ugly outings by striking out the side in the ninth.

Duffy, the Royals starter and losing pitcher, pitched well enough to win most games, holding the Tigers to two runs and three hits in seven innings of work. But Duffy's pair of mistakes in a two-run fourth inning turned out to be the difference in the game.

Duffy's mistakes went down against Miguel Cabrera and J.D. Martinez. Cabrera drove in the Tigers' first run with an RBI double. Martinez capped off the scoring and gave the Tigers their winning margin with a solo home run, his sixth of the season and third in four games.

All the Royals' offense came in the first inning. Nori Aoki led off the game with a double, coming around to score Kansas City's only run on Billy Butler's two-out double.

Anibal Sanchez: Another marvelous performance from Sanchez, who proved you can be effective even if you don't strike anyone out. In his previous four starts coming into today, Sanchez whiffed 27. Against the Royals this afternoon, Sanchez allowed just one run on five hits and a walk, but no strikeouts over seven innings. Even with an MIA strikeout pitch, it never felt as if Sanchez was ever in much danger after allowing an RBI double to Billy Butler in the first inning.

Miguel Cabrera: Reached base twice, drove in the the Tigers' first run with a double. Cabrera was just 2-for-13 over the four games, but four walks gave him a .354 OBP for the series.

J.D. Martinez: Taking over right field full-time since Torii Hunter injured his hamstring, the Tigers may not want to pull Martinez out of the lineup when he returns this weekend. Martinez's solo home run proved to be the margin of victory. He also made a defensive play Hunter likely doesn't make, running down Salvador Perez's sixth-inning fly ball in foul territory.

Bryan Holaday in the eighth inning: The Tigers' backup catcher manufactured a threat with his legs by beating out a bunt single, taking second on Moustakas' throwing error. Holaday managed to take third despite a bad bunt by Eugenio Suarez, taking off after being looked back by Moustakas, then beating Eric Hosmer's throw. But the Tigers could not take advantage, Rajai Davis popping up and Ian Kinsler flying out.

Joe Nathan: In a return to the form the Tigers thought they were getting when they signed the veteran closer to a two-year contract, Nathan struck out the side to preserve the victory.

Rajai Davis: The Tigers' left fielder  was unable to drive home an insurance run with less than two out and a runner on third in the eighth, popping up to first base. Davis was 1-for-11 in the final three games of series.

"It's a baby step." -Ausmus, when asked about the importance of the victory

Miguel Cabrera's base running: A brain cramp by Cabrera cost the Tigers a run in the fourth when he was caught napping at second base. While Cabrera lollygagging back to the bag on Victor Martinez's liner to right, Nori Aoki's on-target throw to Alcides Escobar doubled him off. Cabrera was originally called safe, but the call was overturned via a replay challenge.  Of course, J.D. Martinez would go yard on the next at-bat.

Royals left fielder Alex Gordon has been a thorn in the Tigers' side in the first three games of the series; 6-for-14 with a home run, three RBIs and run-saving defense. The Tigers caught a break when Gordon was a late scratch because of flu-like symptoms. Jarrod Dyson replaced him in the lineup.

The Tigers have had trouble beating the Royals in anything this week, including head-first dives to the first base bag.

Was that a double head-first dive for first base? 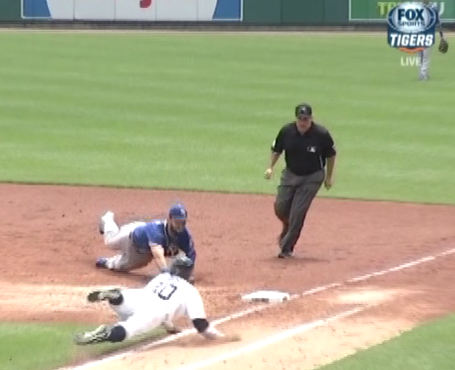 This season Anibal Sanchez has a K/9 of 8.5 and BB/9 of 2.7. Today, Sanchez didn't strike out a batter and didn't issue his first walk until Mike Moustakas drew a base on balls with one out in the seventh. The last Tiger to pitch seven innings and not strike out a batter was Doug Fister on Aug. 3, 2011.

Keep in mind we are taking about small sample sizes, but Eugenio Suarez has cooled off considerably since his white-hot start. Coming into today's play, in four games since his OPS topped out at 1.500, Suarez is 2-for-13, hitting .154/.214/.154. Against the Royals this afternoon, Saurez was 0-for-2 with a sacrifice bunt.

"The way J.D. (Martinez) is swinging, we got to find a way to get him in there." -Ausmus, when asked about Martinez's status with impending return of Torii Hunter

In seven starts since coming off the DL, Anibal Sanchez has a 4-0 record and a 1.93 ERA.

With seven innings of one-run ball today, Sanchez lowered his career ERA against the Royals to 1.04.

In seven appearances before today's outing, Joe Nathan had allowed base runners in all seven, and at least one hit in six. It was also Nathan's first multiple strikeout appearance since whiffing a pair of Rangers on May 25, a stretch of eight games.