Behind big games from Ian Kinsler, Victor Martinez, and J.D. Martinez, the Tigers pounded six Rangers pitchers for 16 hits in an 8-2 victory. Drew Smyly allowed one unearned run in six innings of work to record his fourth win.

Ian Kinsler's return to Texas was a memorable one with a home run and three RBI, leading the Detroit Tigers to an 8-2 victory over the stumbling Texas Rangers. The win extends the Tigers' winning streak to five games. The Rangers kept alive a streak of their own, now having lost six straight.

Kinsler had a pair of hits for Detroit, including a solo home run  (MLB.com video) in the first inning and a two-RBI single in the eighth. The middle of the order Martinez's, Victor and J.D., supplied plenty of fireworks, as has been the norm over the past few weeks. The mighty Martinez's combined for four hits, three RBI, and two runs scored. The white hot J.D. doubled and slugged his fifth home run in eight games (MLB.com video). The just-as-hot Victor had two hits, raising his average to .329, third in the AL.

Also joining in Detroit's offensive barrage was Alex Avila and Rajai Davis, both with three hits and an RBI.

One of the few bright spots for the Rangers was Adrian Beltre. The veteran third baseman was 4-for-4 with an RBI, reaching the 2500-hit milestone for his career. Leonys Martin added a ninth-inning RBI double to cap off the Rangers' scoring.

The Tigers have righted the ship and finally snapped out of their ugly month-long funk. The awful 10-20 stretch is in the rear-view mirror. Along with their five-game winning streak, the Tigers are 7-3 in their last ten games.  Tonight's victory raises their record to nine games over .500 at 41-32, and their very impressive road record is now 22-13. Detroit's lead in the AL Central is back to three games over the Kansas City Royals.

Ian Kinsler: Kinsler had two hits and three RBI in his return to Texas. His first-inning home run could not have been a bigger F-you to the Rangers. Kinsler's ninth big fly of the season was also the Tigers' only offense over their first six innings. Kinsler added a two-RBI single in the eighth.

Drew Smyly: An excellent outing for Smyly almost ended in a no-decision. Smyly was done after six innings and 102 pitches, having allowed an unearned run. The Tigers picked up Smyly with five runs in the top of the seventh, giving him his first win since June 6.

Victor Martinez: Remains unstoppable at .329/.387/.599, reaching base three times with a single, double, and a walk, driving in a pair of runs.

J.D. Martinez: Remains the hottest hitter in baseball. Martinez doubled in the first, and drilled a monster two-run home run to dead center to kick start the Tigers' game-winning rally in the seventh.

Alex Avila: Three hits, including an RBI single to drive in the third run in the seventh. Avila's numbers are looking up (even if the power has gone missing), entering tonight hitting .250/.357/.313 in June.

Rajia Davis: Three hits, a run scored and a stolen base out of the lead off slot.

Chad Smith: The beginning of his MLB career has not gone well. Smith gave up a meaningless run in the ninth inning, actually lowering his ERA from 27.00 to 18.00. He's allowed six hits and four runs over two innings.

Tigers defense: Detroit's inability to turn a double play extended the third inning and allowed the Rangers to tie the game. One out and a runner on first base, Smyly fielded Andrus' combacker, firing a low, but still very catchable, throw to second. Eugenio Suarez allowed himself to be handcuffed by the ball, too eager to make the throw to first. He was unable to handle the throw and charged with an error.

The Tigers were also unable to turn two on the very next play. Cabrera did get the out at second on Shin Soo-Choo's ground ball. But Suarez's return throw was off-line and Smyly didn't get to the bag in time, putting runners on the corners with two down. Given new life on three extra outs, the Rangers were able to tie the game at 1-all on Beltre's single.

Kinsler was charged with a throwing error in another failed attempt at turning a double play in the eighth.

Dave Clark: The Tigers' third base coach made a glaring error in the first inning. Victor Martinez on first base, J.D. Martinez smoked a line drive over the head of Rangers' center fielder Dan Robertson. Clark decided to send Martinez the Elder home despite Robertson's throw reaching the relay man just as he was rounding third. Martinez was dead to rights. Instead of of runners on second and third and two out, the inning was over.

What a cordial young man, that Kinsler.

Ian Kinsler returned to Arlington for the first time in a uniform that didn't have "TEXAS" emblazoned across his chest. The long-time Ranger couldn't have made a bigger impression on his former team and their fans. After receiving a mixed welcome from the Globe Life Park crowd, Kinsler jumped all over a Colby Lewis 1-1 breaking ball, launching a no-doubt solo shot into the left field seats. Smiling from ear-to-ear, Kinsler gave a wave to the Rangers' bench as he began his trip around the bases.

After picking off Elvis Andrus in the first, the Tigers didn't handle the rundown very well. Neither did Andrus, the rundown ending with Andrus and the ball laying in the infield after running into Miguel Cabrera. 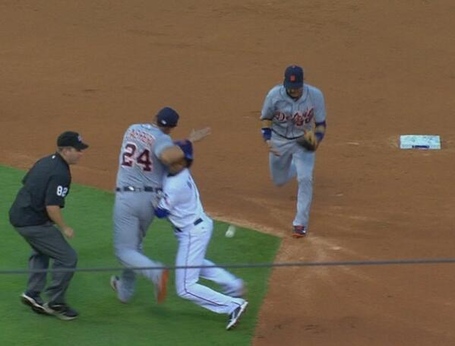 After Adrian Beltre singled in the second, the 2500th hit of his career, he doffed his helmet. Of course, knowing Beltre HATES having his head touched, Cabrera tried to do just that. 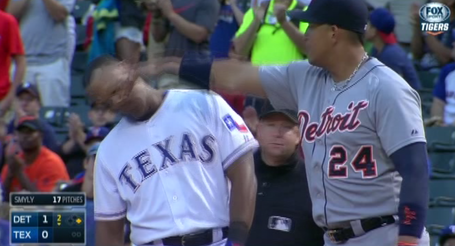 Not sure what was worse - Austin Jackson running the the Tigers out of a fifth inning threat by being thrown trying to steal third, or being tagged out in the face.

Aggressive base running will come at a cost of blown scoring opportunities. It started with Clark's aggressive send of Martinez, resulting in his being easily thrown out at the plate in the first.

The Rangers' "Let them on the basepaths then get them out there" strategy, while unorthodox, seems to be the result of good scouting.

When it comes to stealing bases, the same applies. The Tigers are second overall in baseball, having been caught stealing 26 times. Two Tigers were thrown out trying to steal tonight. Jackson thrown out in the fifth, Rajai Davis in the sixth. Davis' was a bit of bad luck. He beat the throw, but bounced off the bag for a split second, which was enough to be called out via a Ron Washington appeal. 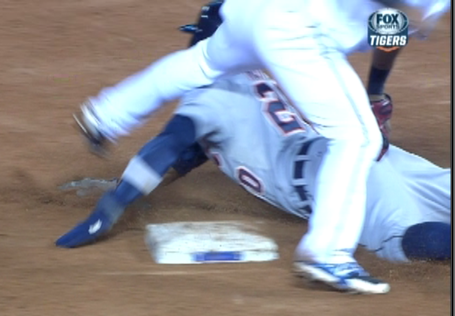 But the aggressiveness can also pay off. The Tigers are fifth in the AL in stolen bases with 51, Jackson stealing his eighth base and Davis his 21st, both in the seventh. The stolen bases played a big part in the Tigers' game-winning five-run rally.

There was an ex-Tiger sighting tonight. The Rangers are so hard up for a first baseman, they called up 36-year-old Carlos Pena from Triple-A. Pena did not have an auspicious return (he played for the Rangers 13 years ago), going hitless in four at-bats, striking out twice and bouncing into a double play.

Entering tonight's action, Eugenio Suarez was 2-for-22 over his previous seven-plus games. He snapped the skid with a seventh-inning double, just his third hit since June 17. Suarez also singled in the eighth, giving him his first multiple-hit game since going 3-for-4 on June 14.