In a long, sloppy game the Tigers were up both 5-0 and 7-3, but forced to hold on late in an 8-6 win. The Martinez's, J.D. and Victor, continued to bash by combining for four hits, including back-to-back home runs, and four RBI.

Share All sharing options for: Tigers 8, Rangers 6: Detroit wins sixth straight game behind the bats of J.D. and Victor Martinez

The surging Detroit Tigers extended their winning streak to six games with an 8-6 victory over the scuffling Texas Rangers. The Rangers are streaking in the opposite direction. In dropping the first two games to Detroit, Texas has lost 8-of-9 and seven straight.

Tigers starter Anibal Sanchez (W, 5-2) had his string of quality starts snapped at six, but he hung around long enough to earn the victory. Sanchez allowed four runs and six hits in 5 1/3 innings, striking out five and walking one. The Tigers needed five relievers to cover the final 3 2/3 innings, who combined to allow two runs on three hits. Joe Nathan pitched the ninth for Detroit, giving up a run but recording his 16th save.

Starter Joe Saunders (L, 0-4) took the loss for the Rangers, rocked for seven hits and six runs while walking five in just four innings of work. The Tigers scored a pair of runs on four hits and a walk over the final five innings against three Rangers relievers,

As has been the case of late, J.D. Martinez and Victor Martinez led the Tigers' offensive attack. Both Martinez's doubled, homered and drove in two runs. Ian Kinsler continued to confound his former team by reaching base four times, scoring two runs. Miguel Cabrera added two RBI, tying him for the MLB lead with 63.

For the Rangers, Adrian Beltre treated Tigers' pitching as if they were throwing batting practice with three hits and two RBI. Ex-Tiger Carlos Pena chipped in with his first home run of the season.

After losing their third straight game to the Kansas City Royals last Wednesday, the Tigers were  1 1/2 games out of first place and had the Cleveland Indians nipping at their heels for second. One week and six straight wins later, the Tigers have a four game lead over the Royals and are 6 1/2 ahead of the Tribe.

Tonight's win raises the Tigers' record to ten games over .500 for the first time in almost a month (May 31, to be exact), at 42-32. Their .568 winning percentage is second best in the AL and fourth overall in MLB. At 23-13, the Tigers also have the best road record in baseball.

Victor Martinez: Just another game for Martinez the Elder with a double, home run, two runs scored and two RBI.

Miguel Cabrera: Drove in the first two runs of the game with a first inning sacrifice fly and an RBI double in the third.

Ian Kinsler: Despite talk to the contrary, there was no retribution for Kinsler's wave to the Rangers' dugout on Tuesday. But Kinsler was still enjoying his Texas homecoming, reaching base four times on a a pair of singles and two walks, scoring a run. Kinsler also had a defensive gem, making a bare-handed catch and throw on Elvis Andrus' high chopper for the first out of the ninth.

Blaine Hardy: The rookie left-hander replaced Anibal Sanchez, entering the game with one and a runner on first in the sixth inning. He struck out Rougned Odor and Leonys Martin to end the inning. Hardy pitched into the seventh, walking one and striking out Shin Soo-Choo before exiting. Unfortunately, Al Alburquerque allowed the inherited runner to score.

Eugenio Suarez: Reached base three times, adding an eighth inning RBI double to a pair of walks. Also played solid defense, making a handful of plays in the hole.

Al Alburquerque: Entered the game with one on and one out in the seventh. Alburquerque immediately gave up a hit and run single to Adrian Beltre. He ignored Beltre, who was able to steal second without a throw. Alburquerque's short night ended on a sacrifice fly to Alex Rios.

Bad base running: The Tigers continue to be thrown out on bases. Saurez was caught stealing for the final out in the second inning, the third Tiger thrown out by Rangers' catching in the series. What was far more egregious was third base coach Dave Clark sending Bryan Holaday on Suarez's one out double in the eighth. Trying to score from first base, Holaday was thrown out by ten feet.

Bryan Holaday: Not the best of defensive games for the backup catcher. Holaday was charged with a passed ball and a throwing error.

More bad Detroit defense: Along with Holaday's misadventures, Nick Castellanos' error in the fourth contributed to the Rangers' three run rally. In the eighth, J.D. Martinez's weak throw from left allowed Elvis Andrus to score easily from third on Alex Rios' line drive, when it looked as if there would be a play at the plate.

Joe Nathan: Not a clean save for Nathan. Gave up a run on two hits, which allowed the game-tying run to come to plate in Carlos Pena. To Nathan's credit, he did get the game-ending K.

Adrian Beltre: No one on the Tigers' staff can retire the Rangers' one man wrecking crew. He's 7-for-8 with three RBI in the two games.

Nine inning games which take forever: Tonight's game took a ridiculous 3:38. It felt like I was watching a Red Sox game.

If you were watching the game on Fox Sports Detroit, you likely noticed the distinctive voice of TV play-by-play man Mario Impemba was not heard. Rod Allen was replaced by FSD reporter Trevor Thompson and joined by studio analyst Craig Monroe. Word from FSD was Mario was unable to call the game due to being under the weather. During the game, Rod Allen said Mario was suffering from food poisoning.

I completely concur with Rob's thoughts:

Anyone who doesn’t appreciate Mario Impemba as a play-by-play announcer needs to listen to tonight’s feed.

Joba Chamberlain has taken the lineup cards to the umpires before the last five games. Coincidentally, the Tigers are on a five game winning streak. So who delivered the lineup cards before today's game? Yep, it was Yukon Cornelius himself. 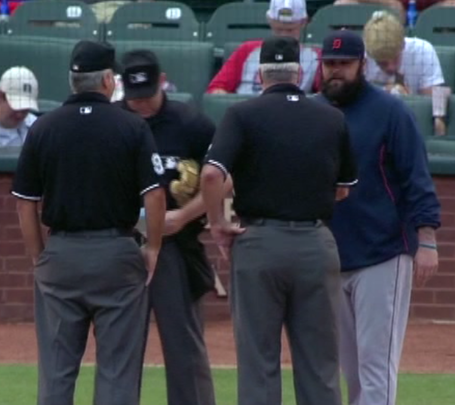 The Tigers are now 6-0 with Chamberlain handling the lineup card chores.

Martinez has been smoking hot, but he's not known as a patient hitter. He didn't draw a walk in 16 straight games from May 28 - June 21. After drawing a walk in the third inning tonight, Martinez has taken a free pass in two of his last three games.

Martinez also homered in the fifth (MLB.com video), giving him nine on the season and six home runs in his last nine games. Martinez's career high is 11, accomplished with the Astros in 2012.

Speaking of the Astros...

J.D. Martinez has more home runs in the last 10 days than the entire Astros roster.

Miguel Cabrera's third inning RBI double (MLB.com video) was his 27th two base hit of the season. The groin injury being a big reason why, but Cabrera had only 26 doubles over his entire 2013 season.

That double also tied Cabrera with Mickey Stanley with 1,243 hits as a Tiger, tied for 18th overall in franchise history.

Cabrera had two RBI in his first two at-bats. He's now tied with Edwin Encarnacion for the MLB RBI lead with 63.

Torii Hunter played in his first game since injuring his hamstring June 16. His RBI single in the third extended his (delayed) hitting streak to four games.

Victor Martinez slugged his 20th home run of the season in the fifth (MLB.com video). It's his sixth season of 20 or more homers, and first since 2010. Martinez is only five short of tying his career high of 25 home runs, set in 2007.

The back-to-back jacks from the Martinez's in the fifth was the the Tigers' fourth this season and second time on this road trip. Rajai Davis and Ian Kinsler went deep on back-to-back at-bats against the Indians on June 21.

Speaking of the Martinez's...

The Tigers have homered in nine consecutive games. It's their longest streak since August 12-22, 2011, when they homered in ten straight games.

Anibal Sanchez's streak quality starts was snapped at six, pulled after allowing four runs on 108 pitches over 5 1/3 innings. Tonight's outing was Sanchez's shortest since his first start coming off the disabled list, when he was pulled after five innings against the Red Sox on May 18. The four earned runs allowed versus the Rangers are the most Sanchez has allowed in any start this season.

Phil Coke has not allowed a run in his last five appearances covering 4 1/3 innings. Over 10 1/3 innings in June, Coke has allowed four runs for a 3.48 ERA. He may not be a lock down reliever, but Coke is no longer a gas can.

Eugenio Suarez entered the Rangers' series in a 3-for-24 funk. In the first two games of the series, Saurez is 3-for-6 with two walks, two runs scored and an RBI.

The Tigers have won six straight games, and two consecutive series. The last time the Tigers accomplished both was after the sweeps of the Baltimore Orioles and Boston Red Sox in May ... right before the never-ending funk hit.