Does good pitching really beat good hitting? The Tigers hope so, as the red hot Toronto Blue Jays come to town for a three-game series.

Drew Hutchison grew up in the shadows of the Tigers' Spring Training complex in Lakeland, Fla., and was drafted by the Blue Jays in 2009. He made his big league debut in 2012 at the ripe age of 21 before missing nearly all of the 2013 season due to Tommy John surgery. He made just 10 starts in the minors last year, allowing a 4.84 ERA in 35 1/3 innings. An impressive spring won him a job in the Jays' rotation this season, and he has taken advantage of the opportunity in a big way. He allowed six runs in 3 1/3 innings in his second start, but rewarded the club's patience by allowing a 3.51 ERA in his past nine starts.

While Hutchison's success is a bit surprising -- he has never adorned any top prospect lists -- the numbers suggest that it is entirely sustainable. He has a solid 2.68 strikeout-to-walk ratio, and his 3.91 FIP is nearly identical to his 3.88 ERA. His batted ball rates are within normal ranges, though Blue Jays fans might like to see that fly ball rate dip just a bit given their hitter-friendly home ballpark. His arsenal is fairly simple: fastball and slider to right-handed hitters, with a changeup added in against lefties. He is still working on getting the latter out -- they have a .328 wOBA and 9.2 percent walk rate against him -- but his overall platoon splits are not too severe. He has been dynamite away from the Rogers Centre, holding opponents to a .618 OPS and 2.33 ERA in seven road starts.

Anibal Sanchez was brilliant in his last start, holding the Oakland Athletics scoreless through eight innings. He ended up with a blemish on his record after the pitching change heard 'round the world. Sanchez struck out nine A's in his 8 1/3 innings of work and generated 11 whiffs in 111 pitches, a near 10 percent rate. The more impressive number, however, may have been the three hits he allowed -- one of which came in that decisive ninth inning. He did a remarkable job keeping the A's off balance, and it's easy to see why when you take a close look at his velocity chart. 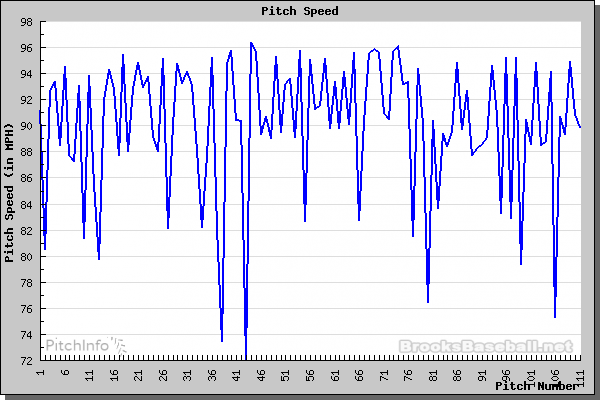 The peaks and valleys may not look as impressive as usual, until you look at the axes. Sanchez dipped into the low 70s with a few pitches, and frequently bottomed out in the low 80s in order to keep hitters off his mid-90s fastball. He threw 25 changeups, 14 sliders, and 12 curveballs on the evening, but was still able to locate over two-thirds of his pitches for strikes.

Sanchez's career stats against the Blue Jays are not pretty. He has allowed a 5.48 ERA and .798 OPS in four starts, all of which have come since the start of the 2012 season. He was rocked by the Jays in his first start as a member of the Tigers, allowing five runs on eight hits in six innings. However, things have gone much better at Comerica Park. In two home starts against Toronto, Sanchez has allowed four runs on 10 hits with 14 strikeouts in 13 2/3 innings of work. Individually, the Jays' success has relied on power. Melky Cabrera and Brett Lawrie are the only position players with batting averages above .300 against Sanchez, and Lawrie's success is in a limited sample of six at-bats. Lefty hurler J.A. Happ actually possesses the second-best OPS among all Blue Jays against Sanchez thanks to a double and a pair of walks in seven plate appearances.

While the Tigers need to get going offensively, the matchup that everyone will be focusing on (and rightly so) is the Blue Jays' offense against the Tigers' starting pitching. The Jays have the best slugging average in the league at .453 and lead all of baseball with a 118 wRC+. Meanwhile, Sanchez has done well to limit teams to single bases this year. Among AL pitches with at least 40 innings, Sanchez ranks second with a .268 slugging average allowed, and has yet to give up a home run. It seems odd saying that he will need to keep pace with Hutchison, but with the Jays offense firing on all cylinders and Hutchison taking advantage of playing outside a bandbox, this is not the best matchup for the Tigers.

Sanchez allows his first home run of the season tonight.