The Tornto Blue Jays rode three home runs to a 7-3 win over the badly slumping Detroit Tigers. The Tigers have lost a season high five in a row, 7-of-10 and 13-of-17.

The Detroit Tigers' latest losing streak reached a season high five games thanks to 7-3 loss to the surging Toronto Blue Jays. The last three weeks for the Tigers have been a train wreck, losing 13-of-17. The Blue Jays have been the polar opposite, now victorious in 18 of their past 22 games.

J.A. Happ (W, 5-2) was the starter and winner for the Blue Jays, allowing three runs on seven hits over 6 1/3 innings. The Blue Jays' bullpen shut down the Tigers for a second straight game. Chad Jenkins tossed 2 1/3 scoreless innings, closer Casey Janssen nailing down the final out.

"We're not doing anything very well. It's been one thing, another thing or a combination." -Brad Ausmus

It was hoped Justin Verlander (L, 6-5) had regained his form after a solid start against the Mariners. Despite Verlander's claims he was happy with his stuff, the Blue Jays got to him for six runs, five earned,and eight hits over seven innings. Verlander's ERA resides at a season high 4.14 after today's loss. Phil Coke did more Phil Coke things, surrendering a ninth inning home run to make for the final margin.

The Blue Jays did the majority of their damage in two innings, scoring three runs in both the fourth and sixth. Dioner Navarro kicked off the scoring with an RBI single, Erik Kratz following with a two RBI single. Juan Francisco and Brett Lawrie both hit their tenth home runs of the season in back-to-back at-bats in the sixth. Melky Cabrera's solo shot in the ninth, also number ten on the year, accounted for the remainder of the Blue Jays' scoring.

Justin Verlander pitched into, then out of, trouble in the top of the first. Singles by Jose Reyes and Jose Bautista put runners on the corners with one out. Verlander waded though troubled waters to get out of the inning unscathed. Adam Lind, last night's offensive catalyst for the Blue Jays, popped up to third, Juan Francisco ending the inning with a fly ball to left.

Neither team could mount a threat for the next couple of innings, Verlander and J.A. Happ exchanging scoreless frames.

Bottom of three, Nick Castellanos became the first Tiger to advance past first base, leading off by doubling off the left field fence. Andrew Romine moved him over with a ground ball to the right side.

Then the Tigers caught a break, allowing them to draw first blood.

Melky Cabrera's failed attempt at a diving catch on Ian Kinsler's bloop to short left drove in Castellanos. The ball rolled far enough away from Cabrera to allow a hustling Kinsler to race all the way to third, credited with one of the shorter RBI triples you'll ever see (MLB.com video).

Unfortunately for the Tigers, horrific outfield defense gave the Blue Jays an unexpected scoring opportunity. Jackson and Hunter failed to communicate on Bautista's pop fly to short right center. The result was an awkward misplay which allowed the ball to drop for a brutal two-base error, which was charged to Hunter.

Verlander compounded the error by giving up a single to Lind and walking Francisco, loading the bases with one out.

Unlike the Tigers last night, the Blue Jays were able to capitalize with the bases full. Dioner Navarro slapped a single to left, everyone moving forward 90 feet. Light-hitting catcher Erik Kratz gave the Blue Jays the lead with a ground ball single through the left side, plating two more runs.

Verlander did get the double play he needed, but it was one batter too late. The Blue Jays' rally petered out when Romine turned Anthony Gose's ground ball into a 6-3 twin killing. But the Blue Jays had taken a three run lead, one of the runs unearned thanks to Hunter and Jackson lacking communication skills.

The bottom of the fourth had more questionable tactics by the Tigers, over-aggressiveness on the bases leading to outs. One down, J.D. Martinez was caught stealing with Jackson at the plate, taking the Tigers out of the inning.

Bottom of five, Happ surrendered back-to-back singles to Alex Avila and Castellanos. Romine tried the "fake a bunt, then take a choppy swing" maneuver. The resulting slow roller to third worked just a well as a straight sacrifice bunt.

Both runners now in scoring position, Kinsler knotted the game at 3-all with an RBI ground out to short. That's where the rally would end, Hunter flying out to right.

Verlander immediately gave the lead right back. Lind drew a lead off walk, Verlander then serving up a no-doubt two run shot to Francisco, Hunter watching the ball sail over the right field wall. The tenth home run of the season for Francisco gave the Blue Jays a 5-3 lead.

The inning went completely sideways for Verlander when Brett Lawrie yanked a 93 MPH fastball over the bullpens in left. Lawrie's tenth big fly of the season increased the Blue Jays' lead to 6-3.

The Tigers' offense remained in their brutal funk in the bottom of the sixth. The Tigers only sent three to the plate, J.D. Martinez bouncing into a double play to end another scoreless inning.

Top of seven, Verlander was still on the mound for Detroit. He allowed a single and steal of second to Bautista (who got such a huge jump, Avila's throw was more for show than anything else). Verlander would get out of the inning, but his frustrating afternoon was over after 107 pitches and five earned runs.

Happ ended his far more effective appearance with one out in the seventh and having thrown 106 pitches. Manager John Gibbons pulled his starter, replacing him with right-hander Chad Jenkins.

Castellanos greeted Jenkins by singling to left, bringing the tying run to the plate in ... oh, yeah ... Romine. The struggling shortstop dribbled a comebacker on the first pitch, Jenkins starting an easy 1-6-3 inning ending double play, the third of the afternoon.

Jackson walks, Castellanos singles (3-3 today), tying run at the plate in Andrew Romine. Inning-ending DP. This is its own punchline.

The Tigers' bullpen was a mixed bag. Evan Reed took over from Verlander in the eighth, walking one in a scoreless frame. But Phil Coke made another unimpressive appearance, dishing out a solo home run to Melky Cabrera in the top of the ninth. The third home run of the game for the Blue Jays pushed their lead to what would be the final score, 7-3.

Bottom of the ninth, the Tigers took their last offensive gasp when Jackson singled and Avila walked. Not wanting to mess around, Gibbons brought in his closer, Casey Janssen. He didn't even need to break a sweat. Castellanos lined out to left on the first pitch, ending another miserable day for the Tigers.

Game over. Your final score is Blue Jays 7, Tigers 3.

Swept at home. Since the BOS sweep, Tigers win percentage is .235 pic.twitter.com/tfCQ7ocqWB

These are not the "bombs" we were looking for. pic.twitter.com/1DFJ0hkPgZ

Looking to avenge getting swept three weeks ago, the Red Sox arrive in Detroit for a three game weekend series. Reclamation project Rubby De La Rosa get his second start as a member of the Red Sox, Drew Smyly takes the mound for the Tigers.

In 2012, De La Rosa was the final piece part of the huge Dodgers - Red Sox trade. He didn't pitch well after being called up late last season (5.56 ERA in 11 1/3 innings). In need of a starter to replace an injured Clay Buchholz, a 3.04 ERA with Triple-A Pawtucket this season earned the 25-year-old another call up. De La Rosa's first start was an impressive one, shutting out the Rays on four hits, while striking out eight over seven innings.

Smyly is mired in a slump, having gone winless for more than a month. Over his last six appearances, including one in relief, Smyly is 0-3 with a 5.47 ERA. His last start was just more of the same, pulled after allowing three runs on seven hits, tossing 105 pitches over four innings in a loss to the Mariners.

Eugenio Suarez was supposed to make his first career start today, but a sore knee is keeping him out of the lineup. The injury occurred Wednesday night, thanks to one of the worst slides you'll ever see. 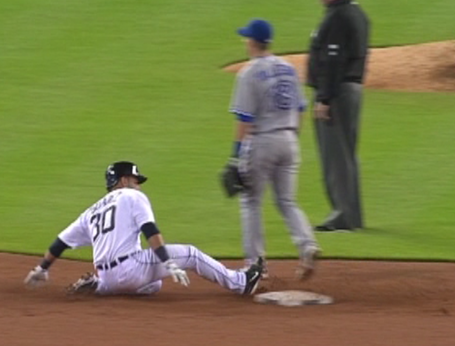 An MRI showed no structural damage. According to Brad Ausmus, the team will re-evaluate the shortstop position based on how Suarez feels on Friday. Currently, Don Kelly is the only other backup option at shortstop. If the Tigers had extended the ninth inning one more at-bat, Kelly would have pinch-hit for Andrew Romine. Ausmus confirmed Kelly would have remained in the game as the shortstop if the Tigers had mounted a comeback.

The Tigers' recent struggles can be encapsulated in one spreadsheet.

A snapshot of individual offensive performance during the 16-game slump, sorted by OPS. Guess who's at the bottom? pic.twitter.com/qfShej83ay

When 2/3 of your starting outfield has a worse OPS than Romine, is it any surprise the Tigers are scuffling badly at the plate?

As for the pitching?

Third inning marked first time in a week Tigers had an RBI hit other than a home run.

How bad has the offense been? This bad:

If this funk continues, we may be handling snakes next.

Austin Jackson snapped an 0-for-10 skein with a second inning single, ending the day with two hits and a walk. The last time Jackson reached base more than twice was back on May 9.

Over his last six games, Torii Hunter is 2-for-22 with a sacrifice fly.

The loss drops the Tigers to 14-14 at Comerica Park. Their five straight home losses is the longest streak since 2008.

Nick Castellanos: Three hits and a fine defensive play for the rookie third baseman. It was the second three hit game of the season for Castellanos.

Asutin Jackson: Reached base three times on two singles and a base on balls.

Justin Verlander: Post-game, Brad Ausmus said Verlander's "stuff was outstanding." Not helping was some questionable defense. But that had nothing to with his serving up a pair of home runs or issuing a season high four walks.

Torii Hunter: Did drive in a run with a fly ball, but did nothing else. The Tigers could afford to carry Hunter's rapidly declining defense when he was hitting. But Hunter stopped hitting a month ago. Hunter's OPS topped out at .885 on May 6. Entering today's action, Hunter was "hitting" .187/.221/.352, an OPS of .573 over his last 24 games. That's 53 points lower than Don Kelly over the same time frame.

J.D. Martinez: The all-or-nothing Martinez gave nothing today, 0-for-4 with a strikeout and a GIDP. The Tigers' outfield has been awful in all phases of the game for the past month.

Miguel Cabrera: It's the rare day when Cabrera is invisible. Today was one of those rare days - 0-for-4 with two ground ball outs.

GAME 55 PLAYER OF THE GAME:

Rick Porcello didn't get the win, but did take PotG with 85% of the vote.