The Detroit Tigers make a statement against the second place Kansas City Royals, clubbing 19 hits in a crushing 16-4 victory.

The Detroit Tigers scored three first inning runs as an appetizer, then feasted on Royals pitching for 11 runs in the fourth and fifth innings, ultimately blowing out the Kansas City Royals 16-4. The convincing victory extended the Tigers' AL Central lead over the second place Royals to 5 1/2 games. Over their past three games the streaky Tigers have outscored their opposition 34-10, while outhitting them 47-20.

The happy recipient of copious amounts of run support was Detroit starter Drew Smyly (W, 5-8), who cruised to his fifth win of the season. Smyly pitched 6 2/3 innings, allowing four runs while scattering eight hits, striking out two and walking one.

Chad Smith, Blaine Hardy and Phil Coke all took a turn out of the Tigers' bullpen, combining to shut out the Royals on one hit over the final 2 1/3 innings.

Royals starting pitcher Jeremy Guthrie (L, 5-8) pitched into the fifth, but was ultimately pounded into submission by Tigers' batters. Guthrie was rocked for eight runs on eight hits, walking three and striking out two in his four plus innings pitched.

The Kansas City bullpen was just as bad, imploding in the Tigers' eight run fifth. Scott Downs replaced Guthrie and allowed two runs on two hits, recording just one out. Louis Coleman took over and was drilled for four runs and four hits before getting the final two outs of the Tigers' huge inning. Adding to the Royals' misery was sacrificial arm Francisley Bueno, who was tagged for two runs and four hits over three meaningless innings.

The Tigers clubbed 19 hits on the night, nine for extra bases. Detroit's attack was led by Torii Hunter's three base hits, including his 12th home run, three RBI and two runs scored. J.D. Martinez remained one of the hottest players in the game, reaching base four times and driving in two. Miguel Cabrera chipped in two hits and three runs driven in before he was pulled in the seventh inning. The all-rookie left side of Detroit's infield, Nick Castellanos and Eugenio Suarez, both had two hits and two RBI. Ian Kinsler also joined the hit parade with two hits and a pair of RBI.

Miguel Cabrera: The game well in hand, Cabrera was pulled in the seventh inning after reaching base four times and driving in three runs. His 73 RBI is second overall in MLB.

Torii Hunter: His long hibernating bat is finally showing signs of waking up. Hunter drove in three runs on three hits, including a long home run, his 12th of the season.

J.D. Martinez: Another big game for Mini-Mart, reaching base four times on two hits, a walk and a hit by pitch, adding a sacrifice fly and driving in three runs.

Nick Castellanos and Eugenio Suarez: The all-rookie left side of the infield combined for four hits, three runs scored and four RBI.

Ian Kinsler: Continues to show how ridiculous his All-Star snub was with two hits, two runs and two RBI.

Drew Smyly: A solid outing was slightly marred by the final batter Smyly faced, giving up a two run shot to Eric Hosmer. But it was meaningless in the big scheme of things, considering it was a 15-2 game at the time. Smyly recorded only his second victory in six starts.

Billy Butler: He's not having a good season, as shown by his career low .671 OPS. But being the Tiger Killer he is, Butler did hit a solo home run in the fourth. Butler has just three homers on the season. Two have come against the Tigers.

Victor Martinez missed his fifth straight game and eight of the Tigers' last ten due to his lingering side soreness. It appears likely we've seen the last of Martinez until after the All-Star break.

The Tigers caught a break before their series with the Royals even started. This afternoon rifle-armed left fielder Alex Gordon was ruled out for all four games against Detroit due to a sprained right wrist. At best, Gordon could play as a late-inning defensive replacement, but swinging a bat is out of the question. The injury will also force Gordon to miss the All-Star Game. The Royals are hoping full rest over the break will allow them to keep Gordon off the disabled list.

The Royals doubled down on Gordon not being in the lineup by playing the 2000-year-old man, Raul Ibanez, in left field. Gordon is a Gold Glove defender hitting a solid .268/ .348/.425, while Ibanez should never touch a glove, is hitting .150 on the season and just .111 since joining the Royals at the end of June.

Ibanez's inability to play the outfield played a big part in the Tigers' eight run fifth. He was playing far too shallow against Alex Avila, who proceeded to double over his head. Later in the inning Ibanez badly misplayed J.D. Martinez's single, and was summarily charged with a run scoring error.

I really do enjoy Mario Impemba and Rod Allen calling Tigers games on Fox Sports Detroit. They have fun, which is the point of sports. But like all broadcasters, they can say the utterly wrong things when filling air time. Such as this bon mot from Impemba after Torii Hunter's RBI single in the first inning:

"Hunter now has an even 50 RBI this season; quietly putting together a really good season."

ARRRRRRGH. High RBI totals do not mean someone his having a "really good season" with the bat. If you read a site like BYB, you know the numbers show Hunter is actually having a rotten season. His OBP entering tonight's action was an awful .294. The only reason Hunter's RBI numbers are third on the team is thanks to Brad Ausmus' unfathomable decision to keep him batting high in the order. Meanwhile, fans rag on Alex Avila despite his ability to get on base (completely ignoring his solid .342 OBP) , which is exactly what you're supposed to do.

Hunter's more typical bad at-bat antics showed up in the third. To start the inning, Jeremy Guthrie had walked Miguel Cabrera on four pitches and plunked J.D. Martinez. Guthrie was close to being on the ropes. So what does Hunter do? He swings at a 2-0 pitch in the dirt, then bounces into a rally-killing double play on the very next pitch.

The only thing salvaging Hunter's OPS this season has been his power. That showed up in the fifth when he teed off on Guthrie's first pitch of the inning, driving a monster 428 foot (!!) solo home run to right center.

Post game, when asked about his monster home run, Hunter showed off his "guns." 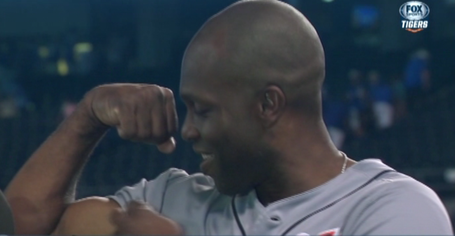 Miguel Cabrera's fourth inning double was his 33rd of the season. That's leads the AL and is second overall in MLB. The only Tiger in franchise history with more doubles at the All-Star break is Magglio Ordonez, who had 35 at the 2007 midpoint.

Royals starter Jeremy Guthrie was pulled after Torii Hunter went yard in the fifth. Hunter's home run was the 76th Guthrie has allowed since the start of the 2012 season, the most in baseball.

As much as I ragged on Torii Hunter earlier, he's as hot as a firecracker at the moment. Over his last eight games, Hunter is hitting .500 with three home runs and 12 RBI.

The eight run fifth inning was the most Detroit has scored in a single frame in almost a full calender year. Their last inning of eight runs or more was on July 28th of last year against the Phillies.

The Tigers eight doubles tonight are the most they've had in a game since August 27, 2005, when they had eight against Boston.

The Tigers may be the streakiest team in the game. Since June 16, they have winning streaks of seven, four, and three games. In the same stretch, Detroit has pair of three game losing streaks.