In an extremely tense game where both teams wasted late scoring opportunities, the Detroit Tigers made two early runs hold up to take a 2-1 nail-biter over the Kansas City Royals. The Royals' offense was unable to convert on scoring chances in the seventh, eight and ninth innings, stranding the game-tying run in scoring position during all three frames.

Post-game, it was revealed bench coach Gene Lamont manged the game for Detroit. Brad Ausmus arrived at Kauffman Stadium feeling ill. By the second inning he became too sick to run the team, having Lamont take over at the helm.

Anibal Sanchez (W, 6-3) has dominated the Royals over his career and tonight was no different. Despite not being his sharpest, Sanchez earned the win by allowing just one run on eight hits, striking out three and not issuing a walk in seven innings of work.

Detroit's bullpen tossed two scoreless innings. But it was also a rocky night for the back-end crew, dodging numerous bullets. Joba Chamberlain allowed a pair of hits in the eighth, stranding the game-tying run at third. Joe Nathan gave up a hit and a walk in the ninth, allowing the game-winning run to reach base before recording the final two outs. Nathan was credited with his 19th save.

The Tigers managed just five hits on the night, none coming after the fifth inning. Three of those base hits come off the bat of lead off man Austin Jackson, who also scored a run. Announced as an All-Star injury replacement for Victor Martinez (who sat out his sixth straight game and is done for the first half) before tonight's game, Ian Kinsler drove in the Tigers' first run with a single. Rajai Davis scored the Tigers second run, crossing the plate on Miguel Cabrera's sacrifice fly.

The Royals doubled up the Tigers' production, outhitting them 11-5. But Kansas City could only muster a single run when Eric Hosmer doubled in the bottom of the first inning and scored on a Salvador Perez single. Hosmer led the Royals with three hits, Perez, Norichika Aoki and Omar Infante chipping in two each.

With two games remaining before the All-Star break, the win extends Detroit's lead in the AL Central to 6 1/2 games over the Royals and 7 1/2 over the third place Indians.

Austin Jackson: A productive Jackson kept a struggling Detroit offense from going completely off the rails. He started the night with three straight singles, two of which played a primary role in the Tigers' only runs of the night.

Anibal Sanchez: He wasn't at his sharpest, allowing at least one base runner in all seven innings pitched. But Sanchez pitched around Royals' base runners all night long, holding Kansas City to one run on eight hits.

The bottom of the seventh: The Tigers having blown a golden scoring opportunity in the top of the inning, it was up to Sanchez and Eugenio Suarez to stymie the Royals' own scoring opportunity in the bottom half. After surrendering a lead off double to  the under the Mendoza Line hitting Mike Moustakas, Sanchez induced three straight ground balls to shortstop, which Saurez converted into outs. The second out was the most spectacular, Saurez picking Jarrod Dyson's absolutely smoked one-hopper while pulled in on the edge of the grass and Moustaks standing on third base. After the inning FSD cameras caught a giddy Saurez. I don't think you'll ever see a happier rookie!

That is one happy rookie shortstop! pic.twitter.com/aGv0qkNNml

Catcher interference: Bottom of the eighth, Bryan Holaday's throw hit Norichika Aoki as he was trying to steal second. The ball caromed into center, Aoki taking third. But the Tigers were bailed out when Lorenzo Cain stepped in front Holaday on the throw. He was immediately called out on batter's interference. 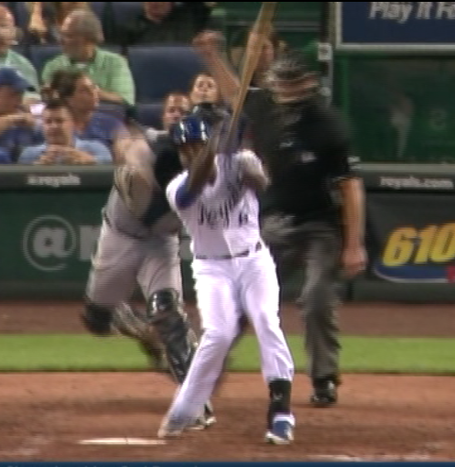 Cain became the first out of the inning, and Aoki was sent back to first. That correct call ultimately cost the Royals the game-tying run, as Eric Hosmer followed with a single. Joba Chamberlain would go on to strand a pair of runners when Jackson ran down Billy Butler's liner to right center.

A one word description of the bottom of the 8th: WHEW.

Ian Kinsler and Miguel Cabrera: Combined for just one hit in seven at-bats, but they drove in the Tigers' only two runs on the night. Kinsler kicked off the scoring with an RBI single in the first, while Cabrera was credited with the game-winning RBI thanks to his third inning sacrifice fly.

J.D. Martinez: A rare bad night for the only healthy Martinez on the roster. Capping off a four strikeout, Golden Sombrero earning game was Martinez's own foul ball biting him him in the you-know-where. 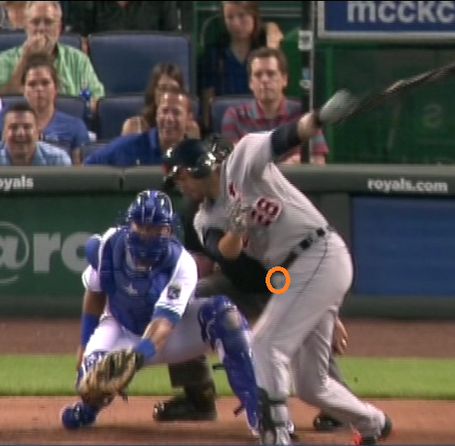 Avila to JD: "I know the feeling well, bro." pic.twitter.com/DpeNQvs2o6

The top of the seventh: The Royals gave the Tigers a scoring opportunity on a silver platter, starting the inning with back-to-back plunkings of Nick Castellanos and Eugenio Suarez. Unfortunately, Gene Lamont went to the small-ball, aggressive base running playbook. It backfired badly. Bryan Holaday moved the runners over with a sacrifice bunt for the first out. Runners in scoring position and Rajai Davis at the plate, Lamont called for the "run on contact" play. Davis bounced a tailor-made chopper to third base, Mike Moustakas firing home to easily nail Castellanos at the plate. Austin Jackson proceeded to strike out on three pitches, completing the waste of a Royals' gift.

Joe Nathan: Nailed down the save. But Nathan used rusty bullets as nails and a rifle butt for a hammer. Nathan pulled off the Roller Coaster - Big Potato act to perfection - he was unable to throw a first pitch strike, put the winning run on base with only one out, yet somehow pitched out of trouble.

The Tigers' offense: Three through eight in the batting order combined for an 0-for-19, seven strikeout, zero walk night. The one saving grace was number three hitting Miguel Cabrera's sacrifice fly, which proved to be the winning run.

In the third inning, the Royals played musical outfielders. The shell game went this way - Jarrod Dyson started the game in center, and moved to left. Norichika Aoki has been in right, slid over to center. Lorenzo Cain began the night in center, but shifted to right. Hope fans were using pencil in their scorecards.

Anibal Sanchez picked off Salvador Perez in the fourth, and the Royals challenged, to no avail. The Tigers got help from some not-on-the-spot camera work, being there wasn't a decent camera angle of the play available.

Perez was picked off, Royals challenged. The umps got the same view of the pick off we did, so the Tigers were golden pic.twitter.com/Rnz2tDOV1E

Speaking of blackouts, tomorrow night's game has a start time of 7:10 PM. But it has to be shown shown on a three hour tape delay by FSD thanks to FOX and MLB policy.

Exclusive broadcast windows and blackouts are the tools of the devil. Or in this case, MLB and FOX., pic.twitter.com/qXNPQSergK

Ian Kinsler stole second base in the opening inning. That swipe gave the Tigers 59 stolen bases on the season, which is the most they've had before the All-Star Break since 2001, when they had 69.

Nick Castellanos' errant throw in the second was the first error of any kind by the Tigers since June 30, a stretch of nine games.

Miguel Cabrera drove in the Tigers' second run with a third inning sacrifice fly. It was RBI number 74 for Cabrera, tying him with the Orioles' Nelson Cruz for the MLB lead.

Anibal Sanchez has dominated the Royals in seven career starts, allowing just one run or less in every appearance.