The Tigers go for a four game sweep against the Kansas City Royals this afternoon at Kauffman Stadium.

Share All sharing options for: Game 91 Preview: Tigers at Royals

Bruce Chen started the season in the Royals' rotation, but landed on the disabled list in late April with a lower back injury. Chen opted for an epidural injection and missed two months of action. He gave up four runs in five innings against the Los Angeles Angels in his first game action off the DL, but tossed a scoreless inning against the Cleveland Indians a week later. It's tough to glean anything from Chen's numbers in a 25 inning sample. Case in point: Chen is striking out over a batter per inning in 2014. His career strikeout rate is under seven batters per nine innings.

Despite his reputation as a Tiger killer, Chen's career numbers against Detroit are quite poor. He is 6-9 with a 5.52 ERA and 1.42 WHIP in 19 starts. The Tigers are hitting .276/.333/.484 in a not-so-small sample of 476 plate appearances. He made two starts against the Tigers in 2013 -- both at Comerica Park -- and allowed six runs in each outing. However, Chen's reputation doesn't come for nothing. There always seems to be an outing or two where Chen can do no wrong against the Tigers, tossing eight shutout innings (as he did in 2012) or holding them to just three hits and a walk (as he did in 2011).

Things did not look good for Justin Verlander one inning into his last start. The Los Angeles Dodgers jumped all over him, plating five runs on four hits and a walk before the Tigers even came up to bat. Verlander was leaving everything up and over the heart of the plate. 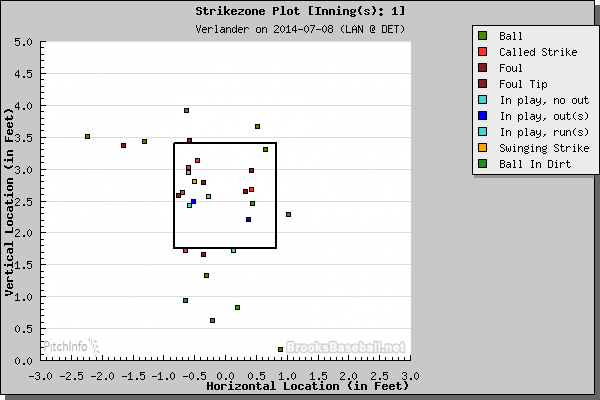 He settled down after that, holding the Dodgers to just one hit and one walk in the next five innings while the Tigers' offense exploded. The adjustment was nice to see, but Verlander still only tallied four whiffs on 100 pitches.

I go back and forth on which player -- Billy Butler or Salvador Perez -- is more lethal against Verlander. Butler gets points for longevity, totaling more than double the plate appearances that Perez has. However, Perez is slugging .800 (!) against Verlander thanks to seven doubles and a home run in just 30 at-bats. Over half of his career hits against Verlander have gone for extra bases. On the other end of the spectrum, Ibañez has been positively brutal against the Tigers' ace despite the platoon advantage. Surprisingly, he only has five strikeouts in 37 plate appearances. The most whiff-happy Royal -- by far -- is Alex Gordon, who has a whopping 25 strikeouts in 73 at-bats.

Last season, the Tigers went into a mid-August series against the Cleveland Indians with a three game divisional lead. After a ninth inning comeback off of Chris Perez in game one, the Tigers never looked back and took all four games of the series. While the division lead got back under five games at points after that, the outcome never seemed in doubt. It's a bit early for that feeling to come with a win today, but it sure would be nice having an 8 1/2 game lead at the All-Star break.

The Royals win big in a "we just want to get to the All-Star break" game for both teams.