Midterm report: How are the Tigers doing vs. expectations?

Overall the lineup is first in many categories. Who is contributing, and who needs to get it in gear?

Share All sharing options for: Midterm report: How are the Tigers doing vs. expectations?

As we consider the Tigers' needs, possible acquisitions, and potential trade chips, let's evaluate the performances of the position players.

One evaluation method is to compare each player's performance with his preseason projection. For this I used the preseason projections at Fangraphs, averaging the Steamer and ZiPs projection systems. I prorated this by the 91 games out of 162 that the team has played. For instance, Miguel Cabrera's preseason projections were 5.7 (ZiPs) and 6.2 (Steamer). This averages to 5.95, and prorates to 3.3. So for Cabrera to be performing up to expectations, he should have 3.3 fWAR. He actually has 3.1 fWAR, so he's slightly off pace. Cabrera has contributed 0.2 fewer wins than expected, the median performance by this measure. 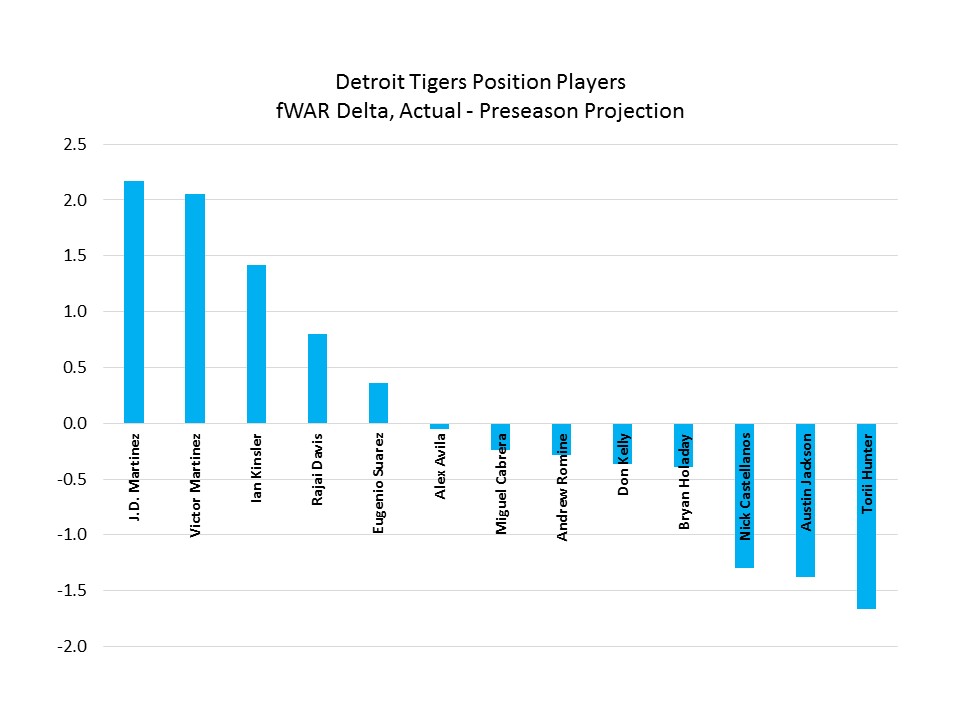 Interestingly, when including the players who are no longer on the active roster, the total difference is practically zero. The lineup is delivering right at expectations, though not at all in the manner expected.

Another way to evaluate the team is to include a consideration for salary. Teams are paying about $6.2 million for one WAR in free agency. I prorated each player's salary for the 91 games played to calculate the amount paid to date. I calculated a monetary value of actual performance by multiplying Fangraphs' WAR by $6.2 million. Then I subtracted the prorated salary from the value of performance. For instance, Miguel Cabrera's 2014 salary is $22 million, or $12.4 million to date. His 3.1 fWAR are worth $19.2 million. Cabrera has delivered $6.9 million of surplus value, and no longer appears in the middle of the pack. 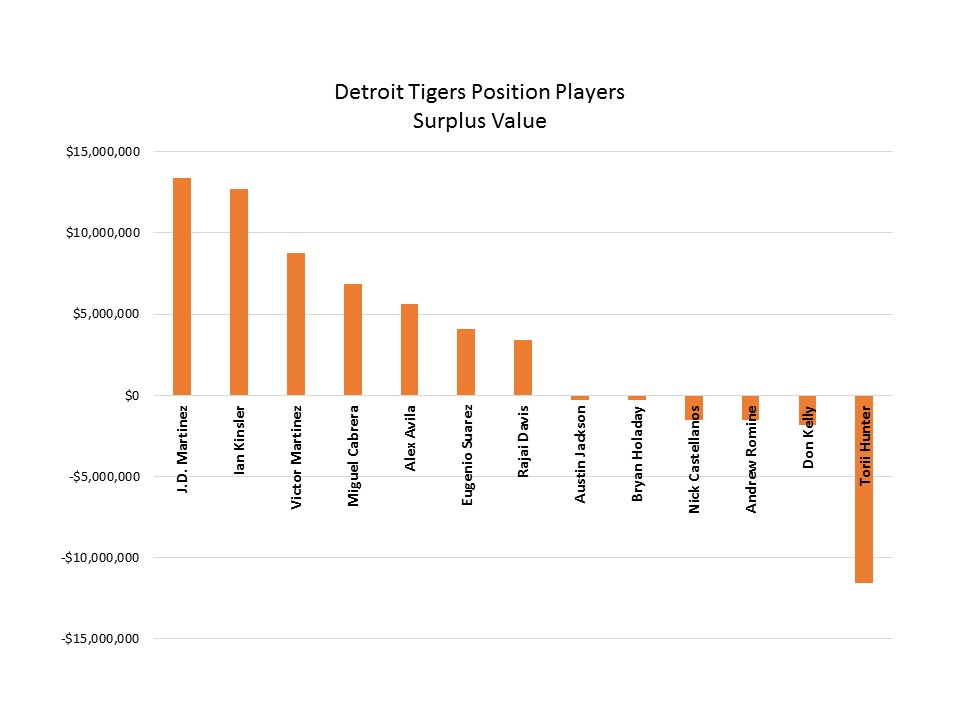 Many of the conclusions are unsurprising. Signing J.D. Martinez was brilliant. The trade for Ian Kinsler was a steal. Victor Martinez is valuable no matter your perspective. Signing Rajai Davis for $5 million has paid off. Torii Hunter needs to turn it around in the second half.

Other conclusions are less obvious. Alex Avila is performing as expected, and would cost significantly more to replace in free agency. Eugenio Suarez challenges the notion that the Tigers have a poor farm system. Austin Jackson is under-performing expectations, but earning his keep.

If Nick Castellanos, Austin Jackson, and Torii Hunter can simply deliver as expected, the Tigers will not need an acquisition for the lineup.