Get strike one, ask questions later. This has been Porcello's mantra over his last few starts.

There are currently two starting pitchers in baseball with scoreless streaks totaling 25 innings or more. One is Dodgers ace Clayton Kershaw, current Best Pitcher in Baseball™ and a near-lock to win his third Cy Young award in four years. The other is Rick Porcello, who, for all his faults, is making a late push for his first All-Star appearance. Porcello has tossed back-to-back shutouts — the first two of his career — and has not allowed a run in his last 25 innings. His ERA has dropped by almost a full run, from 4.03 to 3.12.

His latest effort, Tuesday night's four-hitter against the Athletics, was especially impressive because of one peculiar stat line: zero strikeouts. Porcello recorded 17 ground ball outs (and no double plays), none of which required a sparkling effort from his infield defense. He was ruthlessly efficient, needing just 95 pitches to record his 27 outs.

So what has made Porcello so effective during this stretch?

Despite all those first pitch strikes, Porcello also has done a great job of keeping the ball out of the middle of the plate. He has pounded the lower half of the strike zone, hitting the lower outside corner with ease. 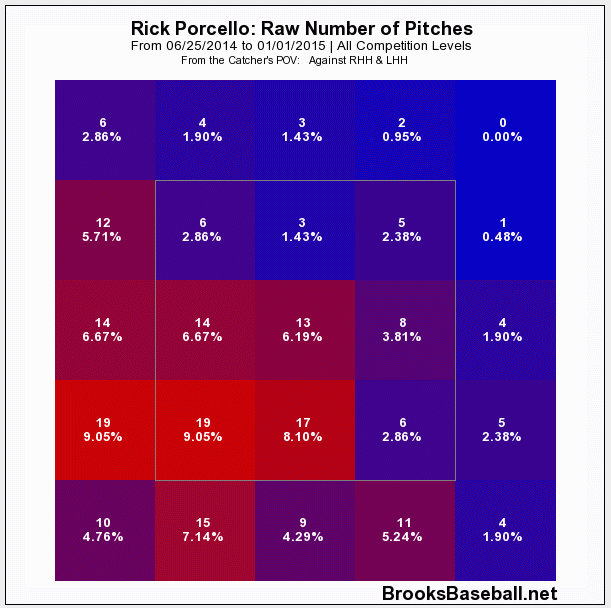 One of the major talking points about Porcello's performance this season is his improvement against left-handed hitters. He has gone up against 18 lefties in his last three starts, allowing just nine hits. This recent dominance has actually given Porcello some mild reverse splits in 2014. Lefties are hitting .236/.291/.360 this year, while righties have a slightly higher .683 OPS. Lefties are pounding the ball into the dirt at a 50.5 percent rate this year with a pop-up rate close to 20 percent.

Unfortunately, certain aspects of Porcello's numbers are probably not sustainable. Only 5.4 percent of fly balls hit by lefties have resulted in home runs (league average is around 10 percent) and their .259 BABIP probably will not last. His 6.9 percent whiff rate and 5.23 strikeouts per nine innings are his worst rates since 2011. His ground ball rate is improving, but is still the lowest of his career.

While Porcello's run of dominance may not last, his improved ability to throw strike one and stay out of the middle of the plate are pitching staples that will serve him well throughout the rest of the season. He is pounding the strike zone with all of his pitches and keeping hitters off balance, resulting in some startling efficiency.

Is this the new Rick Porcello? That part remains to be seen, but it's not out of the question after what he has showed in his past few starts.