Justin Verlander and the bullpen combined to hold the Diamondbacks to three runs on eight hits, while Austin Jackson, Torii Hunter and Miguel Cabrera provided the Tigers' offensive firepower in a 4-3 victory. The victory raises Detroit's road record to an MLB best 29-16.

The Detroit Tigers kicked off a seven game west coast swing with a 4-3 victory over the Arizona Diamondbacks. The win raises Detroit's road record to a baseball-best 29-16, .644, also increasing their lead in over the Cleveland Indians in the AL Central to 6 1/2 games.

Justin Verlander (W, 9-8) wasn't dominant in pitching 6 2/3 innings, allowing three runs on six hits, striking out five and walking three. But in earning the win, Verlander raised his record in interleague play to a dominant 24-2, now having won 13 straight against the National League.

The Tigers' often shaky bullpen was up to the task. Scoreless outings from Al Alburquerque and Joba Chamberlain set up a struggling Joe Nathan. Detroit's much derided closer did allow a two out base hit, but Nathan would nail down the win to earn his 20th save.

Diamondbacks starter Vidal Nuno was yanked after allowing three runs on seven hits, striking out three and walking one in 4 2/3 innings. Despite the quick hook, manager Kirk Gibson allowed Nuno to bat with the bases loaded and two out in the fourth. He would bounce out, stranding three.

It would be Diamondbacks reliever Randall Delgado (L, 1-2) who would ultimately take the loss for Arizona. Delgado allowed one run on two hits in his 2 1/3 innings of work.

Arizona was held to eight hits on the night, Aaron Hill the only D-Back with two hits. Mark Trumbo added an RBI single, and Miguel Montero drove in a run with a ground ball. Gerardo Parra capped off the scoring for Arizona by hitting his sixth home run of the season, a solo shot in the sixth inning.

The Tigers had nine hits on the evening, led by home runs off the bats of Torii Hunter (a two run shot in the first, number 14 on the season) and Austin Jackson (a solo homer in the third, number four on the year). Jackson would have two hits and two runs, scoring the game-winner. That last of Miguel Cabrera's two hits was a seventh inning single high off the center field wall, driving in the final, game-winning run. It was RBI number 76 for Cabrera, which leads the majors.

Torii Hunter: The old man's power stroke has returned. Hunter drilled a no-doubt, two run home run in the second inning (MLB.com video), kick starting the Tigers' road trip. The home run was his 14th of the season and second in two games.

Rajai Davis: Reached base three times on two hits and a walk, and continues to rake against left-handers. Davis was 2-for-2 against D-Backs starter Vidal Nuno, raising his batting average against southpaws to .385.

Justin Verlander: It was vintage Verlander for the first three innings, no-hitting the D-Backs. But the last three plus innings were more of what we've become accustomed to, including a scary 30 pitch, four hit, two run fourth where the D-Backs seemed to barrel up on everything Verlander threw. But Verlander was good enough to put the Tigers in position to win, tossing a 6 2/3 inning quality start. "Quality" being relative, of course.

Miguel Cabrera: Even though it was ultimately scored a single, Cabrera came through by driving in the game-winning run in the seventh with a monster shot to dead center.

NL style baseball: At least there was no need for the overrated double switch.

Ah, yes. I missed you so. National League baseball is so much fun with pitchers sacrifice bunting in the 3rd inning. (rolls eyes)

The first game of seven out west started with a few line up changes. J.D. Martinez, off to a slow 2-for-15 start to the second half, got the night off. Rajai Davis got the start in left field. For the second consecutive game, Victor Martinez played first base in place of Miguel Cabrera. Cabrera slid across the diamond to make his third start this season at third base, Nick Castellanos taking a seat.

We now know why Tony LaRussa joined the Diamondbacks.

Apparently the deciding factor in Tony LaRussa joining the D-Backs was getting his own private garbage can. pic.twitter.com/FrYYDLqIiv

Rajai Davis is cooler than the rest of us.

How cool do you have to be wear a sweatband with a pic of yourself on it? As cool as Rajai Davis. pic.twitter.com/9oZpcezB8I 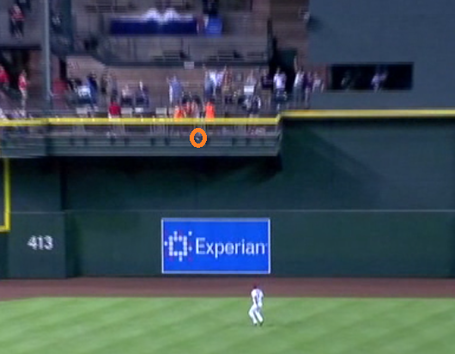 Cabrera was thrown out at second on what was scored an RBI single. The play was challenged (at first it was believed to be in regard to the play at second, but it turned out to be a crew chief initiated home run review), but the call on the field stood. But for some ungodly reason, the easy to determine challenge took more than three minutes. Seems it takes quite a while for a homing pigeon to return from New York City.

It's come to this whenever Joe Nathan enters a game.

And ... here comes the "closer" ... pic.twitter.com/WHEASygKHp

Wise words. RT @HookSlideBYB "He is not a lights-out closer anymore, you gotta put that out of your head." Jim Price, on Joe Nathan.

Tigers fans were so nervous, "Joe Nathan" was trending on Twitter. Nathan defied the doubters, recording the save.

Justin Verlander made his 287th start as a Tiger tonight. He's tied with Earl Whitehill for eighth overall in Detroit franchise history.

Austin Jackson has four straight multi-hit games for the sixth time in his career, doing so for first time since August 18-22, 2013.

Joba Chamberlain made his seventh straight scoreless appearance (and 14-of-15), picking up his AL-best 20th hold. Over that 15 game stretch, Chamberlain has a 0.68 ERA.

Verlander earned the win to improve to 24-2 in interleague play. He's won 13 straight against NL opponents.