Rick Porcello and the Tigers were in position for a comeback win after scoring two runs in the top of the eighth inning. But Phil Coke and Ian Krol conspired to give the lead right back, the Diamondbacks taking a 5-4 victory.

The Detroit Tigers' bullpen let an excellent outing from Rick Porcello go to waste by allowing two runs in the bottom of the eighth, the Arizona Diamondbacks taking a 5-4 come-from-behind victory. Detroit drops to 17-11 in one run games while their lead in the AL Central falls to 5 1/2 over the Kansas City Royals.

Chase Anderson, the Diamondbacks' southpaw starter, kept Tigers bats in check over six innings, allowing just two runs and five hits, walking three while striking out five. In line for the win, Arizona's bullpen has issues of their own, and coughed up the lead in the top of the eighth. Brad Ziegler was tagged for four hits and two runs in just 1/3 of an inning. Eury De La Rosa would get out the of the inning without further damage, ultimately earning the win. Closer Addison Reed pitched the ninth, recording his 25th save.

Rick Porcello was in position for what would have been a league-leading 13th victory, allowing three runs on five hits, striking out five while not walking a batter over seven innings. Porcello was lifted for a pinch-hitter in the eighth inning despite an extremely efficient pitch count of 77. Post game, Brad Ausmus said he went to a pinch-hitter because he was looking to "blow the game wide-open."

But the game quickly went sour when the Tigers' bullpen entered the game in the bottom of the eighth.

Phil Coke faced three batters to start the inning, walking two. Al Alburquerque took over, recording the second out, then pitching around slugging Paul Goldschmidt with a walk. Ian Krol replaced Alburquerque, only to give up a game-winning two RBI single to Miguel Montero, hanging both runs and the loss on Coke. Corey Knebel would get the Tigers out of the inning, but one batter two late.

Montero gave Arizona their winning margin, but it was the top of the Diamondbacks' order who would do the most damage. Lead off man David Peralta tripled twice, scoring twice. Number two hitter Aaron Hill made the most of having Peralta on base in front of him, driving in all three Arizona runs. Hill kicked off the Diamondback's scoring with a solo home run in the first inning, his eighth of the season. Hill proceeded to drive home Peralta twice with a third inning sacrifice fly and ground ball in the sixth.

Meanwhile, the Tigers could do little against Anderson, living up to their reputation of being handcuffed by left-handed pitching. Austin Jackson remained a productive lead off man with a pair of hits and two runs. Miguel Cabrera had two hits and drove in his MLB leading 77th RBI. Torii Hunter gave the Tigers what would be only be a temporary lead with a bases loaded, two RBI single in the eighth.

Ausmus had already explained his handling of Porcello. So what did he have to say about his bullpen?

"The walks killed us."

Even a Dartmouth Man couldn't put any spin on what was lousy performance from his left-handed relievers.

Rick Porcello: Made just three mistakes, but they were costly - A home run to Aaron Hill and a pair of triples to David Peralta. Regardless, it was a quality start. Porcello was extremely efficient, needing just 77 (!!!) pitches over seven full innings. Despite having plenty of gas in the tank, Porcello was ultimately pulled for a pinch-hitter during Detroit's eighth inning rally. There's NL baseball for you.

Austin Jackson: What little offense the Tigers had early on came via Jackson, coming around to score after each of his singles in the first and third innings.

Torii Hunter before the eighth nning: Not his best defensive game, which is saying something. Hunter didn't play either of David Peralta's extra base hits well, resulting in a pair of triples and two runs scored. There was a ridiculous caught stealing, Hunter taking off while the pitcher was still in the stretch. Hunter also bounced into an inning-ending double play in the sixth, just because.

Rajai Davis: Two runs already having crossed the plate in the eighth, Brad Ausmus wanted the big inning. With left-hander Eury De La Rosa on the mound for Arizona and the bases loaded with two out, Ausmus elected to pinch-hit for Rick Porcello with Davis. Davis, who is hitting .379/.412/.600 against lefties, immediately found himself ahead in the count 3-0. But the at-bat quickly went south. Davis would strike out looking, stranding three.

For this we pulled Porcello?

The Tigers' left-handers out of the bullpen: Joba Chamberlain had pitched in three consecutive games and was unavailable for eighth inning duty. So Phil Coke got the nod. Facing a trio of left-handed hitters, Coke reverted back to his early season ways by showing absolutely no command. After taking a line shot off his body for a lucky first out, Coke walked the next two batters. Ausmus immediately pulled him. Two out and bases now loaded, Ian Krol was brought in. The badly scuffling lefty continued to badly scuffle, serving up the game-winning, two RBI single to Miguel Montero.

Brad Ausmus: For electing to yank Al Alburquerque in the eighth, thinking Krol was a better option against a left-handed bat. I like Alburquerque's chances at getting an out with the bases loaded far more than Krol, who really should be in Triple-A.

Ausmus also allowed Don Kelly to bat in the ninth inning with the tying run on base, leaving the far more dangerous Nick Castellanos on the bench.

National League baseball: In a normal AL game, Rick Porcello remains in the game and the eighth inning bullshit likely never happens. In the NL version, normal managerial wisdom requires you to pull your pitcher during a late rally. That common wisdom left the game in the hands of Detroit's extremely shaky bullpen. You know what happened from there.

I would complain about the hot weather in Detroit, but it was damn near as hot inside air conditioned Chase Field. Outside temperature in Phoenix at game time was 111, and it was 80 in the closed stadium. I don't think Hell is that hot. Well, Hell, Michigan, anyway.

It was Rod Allen throwback night on FSD. The Tigers' TV color man was a Diamondbacks' broadcaster from 1998-2002, which gives us gems such as this shot with legendary broadcaster Joe Garagiola: 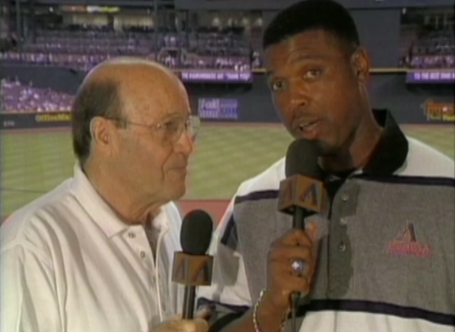 Trying to swipe second base base in the fourth inning, Torii Hunter was caught stealing by the pitcher.  Hunter took off for second while Chase Anderson was still in the stretch. All Anderson had to do was step off the rubber and throw to second for the out.

The Tigers had runners on the corners with no one out in the eighth. On third, Ian Kinsler headed for home on Victor Martinez's hard ground ball to first, Paul Goldschmidt firing to the plate. Kinser was caught in a rundown, and it was a long one - you can score it  1-2-5-1-6-3. Yet Miguel Cabrera, who was on first when the ball left the bat, stopped at second. He did not advance to third base despite Kinsler managing to extend the rundown. The Tigers would go on to score in the inning, but it was in spite of their base running, not because of it.

Austin Jackson singled in the first and third innings, giving him five straight multi-hit games. It's only the second time in his career he's had such a long streak. The last was August 31-September 4, 2011.

J.D. Martinez has cooled off considerably, which was bound to happen. He was not going to hit like the next coming of Miguel Cabrera forever.  Martinez's post All-Star break skid is now 3-for-20 (.150) after a 1-for-4 night.

Miguel Cabrera's eighth inning single gave him two hits on the night. Cabrera has 364 multi-hit games as a Tiger, tying him with Dick McAuliffe for 13th in franchise history.

Lets just save Torii Hunter for bases loaded situations. This season Hunter is 4-for-8 with 11 RBI when the bases are juiced.