Location cause of Joakim Soria's early struggles with Tigers

The newest Tigers' first two outings have not gone so well, especially the one last night against the White Sox. Let's break down the appearance pitch-by-pitch and see what happened.

Share All sharing options for: Location cause of Joakim Soria's early struggles with Tigers

Many Tigers fans and pundits have complained about the recent acquisition of Joakim Soria, claiming the price paid was too high for a year-and-a-half of a relief pitcher, no matter how effective. Soria has only made two appearances since joining the team, and neither did much to stifle those complaints.

Last night, Soria entered the game in a tight situation. With some help from the defense, Anibal Sanchez had just fallen apart in the seventh inning — as he is wont to do, lately — and given up the go-ahead run. There were runners on first and second, only one out, and the top of the White Sox lineup due up. Honestly, this is exactly how the Tigers should be using their most lock-down reliever. I was quite satisfied to see Mexican right-hander trot in from the bullpen.

But the decision didn't work out as planned. Soria came into a 3–2 game with two men on and one out, and exited a 9-2 game with two men on and two outs. That's right, he allowed six runs to cross the plate (though only four counted against him) and recorded only a single out. He also allowed two home runs in one-third of an inning, after allowing only two home runs in two half-seasons with the Rangers.

Let's break down his appearance with PitchF/X data and take a look at what went wrong.

The inning started with Adam Eaton foreshadowing the first pitch he saw into left field, advancing the runners a base apiece and thereby loading the bases. Here's the pitch: 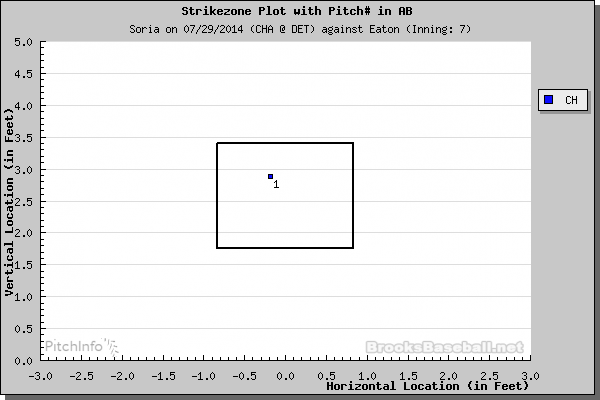 A meatball changeup that any major-league hitter will make solid contact with. Sometimes you can get away with a pitch like this, but more often than not they end up being deposited into various parts of the outfield and beyond.

Next up was Alexei Ramirez. 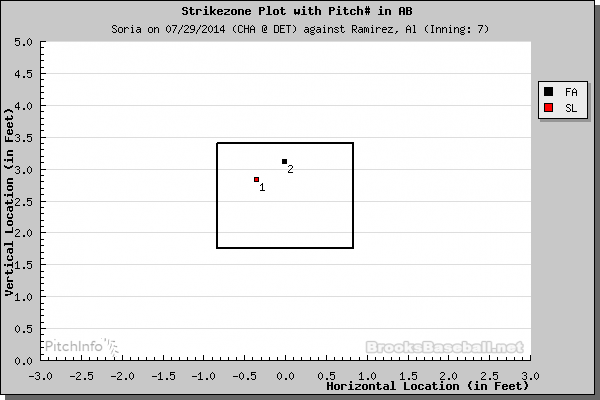 The first pitch was a dangerous slider, which Ramirez hit foul. He didn't miss the fastball that followed, ripping it to deep right-center field for a three-run double.

Now with the game blown wide open and a runner standing on second base, Jose Abreu sauntered to the plate. 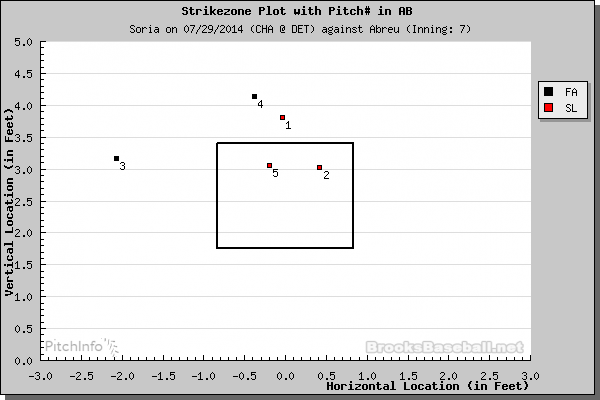 Soria started the rookie slugger off with a high slider for ball one and followed it up with a not-so-high slider, which Abreu swung through. A pair of fastballs nowhere near the zone drove the count to 3-1, before a desperation slider was driven over the left field fence. 8–2 White Sox.

Have you noticed anything about these pitches? Three batters, eight pitches, and not one of them in the bottom half of the strike zone. Soria would get a few pitches down for Adam Dunn, but it wouldn't help much. 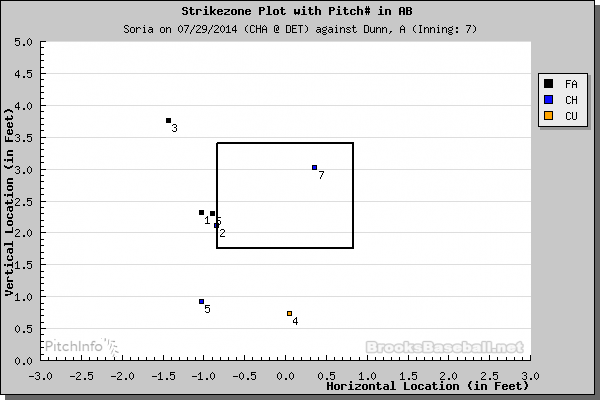 After watching the first two fastballs paint the black on the low outside corner, Dunn worked the count full before depositing another meatball changeup into the seats down the right field line. In Soria's defense, he spotted his fastball perfectly a few times during this at-bat, he just couldn't nibble the zone enough with his secondary offerings to put Dunn away. After putting himself in a hole, he served up a mistake pitch to a guy who's made a good living off of mistake pitches.

Dayan Viciedo followed and became the second out of the inning, the first and only out Soria would record. 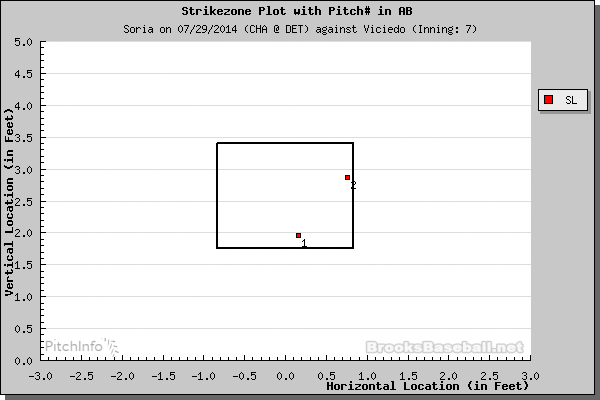 A pair of good sliders got Viciedo to ground out to second base.

Up next was Conor Gillaspie, the White Sox third baseman and the tenth batter of the half-inning. He singled off of Sanchez earlier in the inning and scored the go-ahead run. 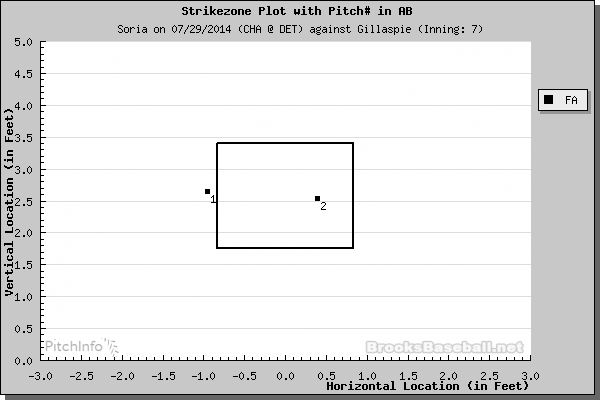 Switching to fastballs, Soria got a favorable call on the outside edge before putting one right into Gillaspie's happy zone, which was promptly singled into right field.

Gordon Beckham then strolled to the plate for his second at-bat of the inning. He reached base on Miguel Cabrera's error earlier in the inning and scored on Ramirez's double. 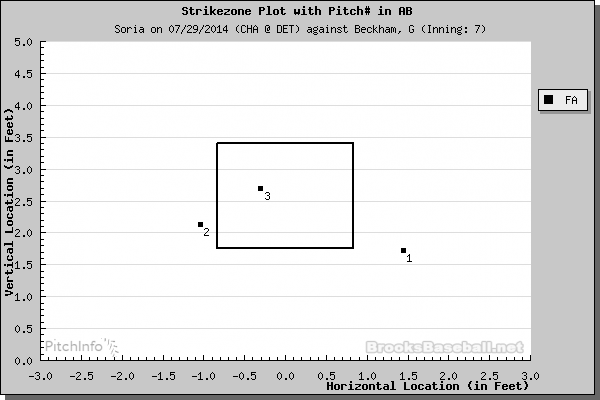 Still nothing but fastballs. After a first pitch ball, another favorable call made the count 1–1 before Beckham would hit another poorly located fastball into right field.

At this point, mercifully, Brad Ausmus removed Soria in favor of the lefty Ian Krol to face the lefty Alejandro De Aza. Krol retired De Aza but would have some meaningless struggles of his own when he returned in the eighth inning.

Overall, it seems pretty obvious what Soria's issue was: location, location location. Here is an illustration of where all the pitches that ended an at-bat were located: 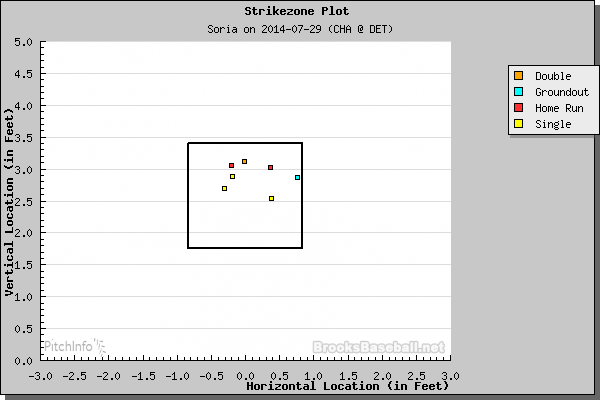 Every hit came on a pitch in the top half of the zone, and all were relatively down the middle. The only out recorded, unsurprisingly, is the one closest to the edge of the strike zone.

Soria has been a lights-out reliever for the last year in part because of his ability to work the bottom of the strike zone. Since joining the Rangers, 52.1 percent of all of his pitches were in the bottom third of the strike zone or below it. Last night, something caused him to struggle to get the ball down. Outside of a few fastballs to Dunn and a slider to Viciedo, none of his pitches were placed well in the bottom of the zone.

Personally, I'm confident that Joakim and Jeff Jones can determine what the issue was and address it. The Tigers bullpen isn't actually cursed, no matter how much it may seem like it. I expect Soria to be fine after a couple mechanical tweaks, but if it doesn't happen soon the pressure will begin to mount.

All data taken from BrooksBaseball.net