Drew Smyly will look to build off of his solid outing in Anaheim as the Tigers and White Sox finish up their three game series.

John Danks was in the middle of an excellent stretch the last time he faced the Tigers. He held them to two runs in seven innings on June 11th, an 8-2 White Sox victory. In the two months (roughly) surrounding that start, Danks held opponents to a 2.69 ERA. However, his 3.94 FIP and 2.1 strikeout-to-walk ratio indicated that things probably were not going to last. Well... they haven't. Danks has given up 11 runs on 18 hits in two starts since the All-Star break, including an outing 11 days ago when the Houston Astros tagged him for 12 hits in 4 1/3 innings.

This is how 2014 has gone for Danks, though. He has 14 quality starts -- including 10 starts with two runs or fewer allowed -- mixed among his 21 outings this year. Unfortunately, most of the other starts have been horrible. He has given up six runs or more on four separate occasions. He has walked three batters or more in 10 starts. He has just one outing with more than five strikeouts since mid-May.

To be fair, the lack of strikeouts hasn't hurt Danks in 2014. He has done an excellent job of avoiding the middle of the strike zone, resulting in a 17.7 percent line drive rate this season. His 10.6 percent pop-up rate is also the highest of his career. 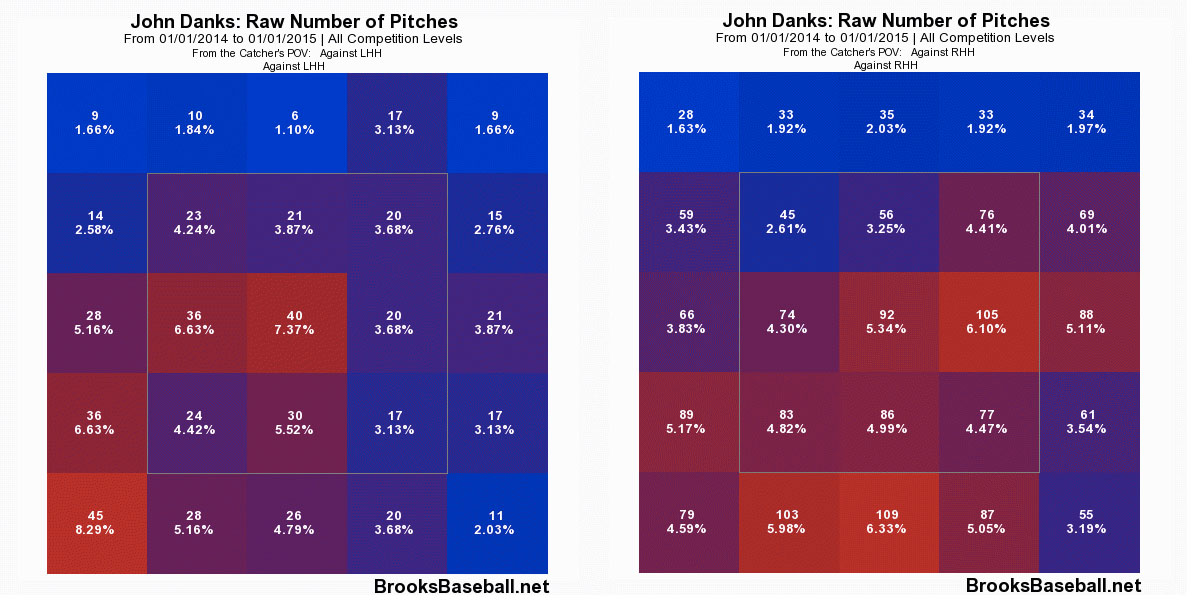 Drew Smyly defied the odds in his last start, mowing his way through a righty-heavy Los Angeles Angels lineup for 5 2/3 strong innings. Smyly's platoon splits are well documented, but he was able to generate an incredible 20 (!) whiffs on just 92 pitches. This resulted in a career high 11 strikeouts against an Angels team that strikes out at a near-league average rate. They also lead the league with a .790 OPS against left-handed pitching, making it all the more disappointing that Smyly was saddled with his ninth loss of the season in a 2-1 defeat. However, his win-loss record is a bit misleading. Seven of his nine losses have come when the Tigers offense scored two runs or fewer. Sure, he's not completely blameless -- a 10-0 loss to the Oakland A's sticks out -- but Smyly has received the least amount of run support of any Tigers starter in 2014.

Smyly's ridiculous platoon splits are on full display when looking at his career numbers against individual White Sox hitters. He has held lefties Adam Dunn, Alejandro De Aza, and Conor Gillaspie to a combined 3-for-21 with a pair of walks and 12 strikeouts (seven of which belong to Dunn). Meanwhile, every White Sox right-hander not named Tyler Flowers is hitting at least .333 against Smyly (Flowers is 0-for-2). Dayan Viciedo, Paul Konerko, and Jose Abreu have all homered off the southpaw. Despite these figures and a 4.15 ERA, Smyly has never factored in a decision against the Sox in 10 career appearances.

Since June 1st, Smyly has allowed a 3.46 ERA and 3.71 FIP in 52 innings of work. He has had a couple of speed bumps along the way, but the Tigers have to be happy with how their fifth starter has performed. Both he and Danks have looked much better than their overall numbers at times, though Smyly's ability to generate swings and misses with his breaking ball is a difference maker. However, he has to locate it down in the zone to be successful. The White Sox have struggled against lefties at times, while the Tigers have only scored three runs in 13 1/3 innings against Danks this year.

Joakim Soria escapes a late inning jam and the bullpen comes up big in a low-scoring affair.