The Tigers and Mariners finish up their three game series with playoff positioning on the line today at Comerica Park.

Share All sharing options for: Game 122 Preview: Mariners at Tigers

The stark contrast in Chris Young's WAR statistics -- infuriating as it may be for continuity's sake -- shows the difference between what Young "should" be doing and what he has actually done in 2014. Fangraphs calcuates WAR based on FIP, which Young isn't to be bothered with. He only has 88 strikeouts in 140 2/3 innings, and his propensity to give up home runs doesn't help either. Meanwhile, Baseball Reference's WAR is based off of ERA. According to them, Young has been worth 2.6 wins above replacement, which seems right for a guy with a 3.20 ERA this late in the season, even if it's entirely created in "Oh God, why can't we hit this bum?" fashion.

The reason why no one can hit "this bum" is because Young does everything he can to stay out of the middle of the plate. He primarily works on the outer half of the plate against both righties and lefties, and loves to elevate his fastball despite it topping out at 89 miles per hour. This has resulted in a whopping 58.7 percent fly ball rate, by far the highest in the majors. It has gotten him into trouble at times on the road, where he has given up 13 of his 19 home runs. His 4.33 road ERA is nearly two runs higher than his stellar 2.35 home ERA. 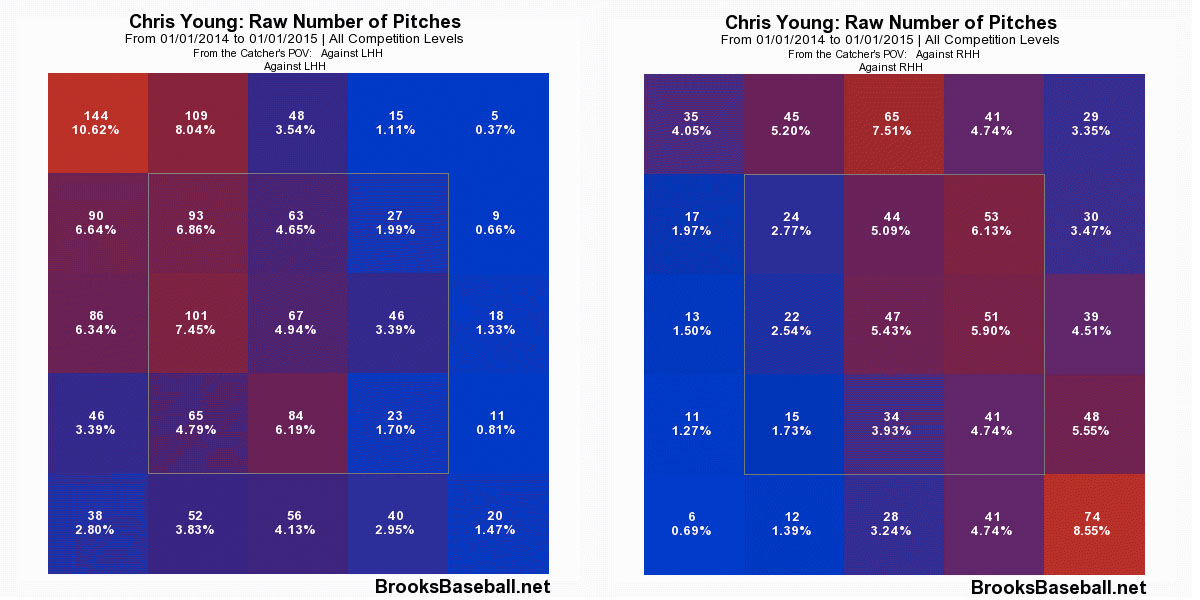 Robbie Ray's numbers took a hit in his last start when he allowed four runs in five-plus innings against the Pittsburgh Pirates. He was fortunate to get as far as he did because his fastball command was iffy at best. Rod Allen remarked early on that the Pirates' hitters were sitting on his changeup on the outer half of the strike zone because Ray could not hit the inside corner with his fastball. He ended up throwing 32 of 51 fastballs for strikes, but the three runs he allowed in the first three innings were a direct result of that spotty fastball command. The fourth Pirates run was an inherited runner that the bullpen allowed to score, naturally. 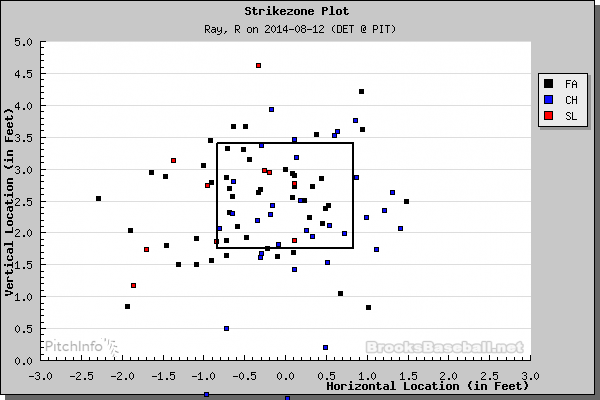 Young dominated the Tigers in their first meeting this season, holding them to two runs on three hits in six innings. He struck out a then-season-high six hitters in yet another hard-luck loss for Drew Smyly. Miguel Cabrera homered in that game, but has just two hits in 12 at-bats against Young. Torii Hunter also has a homer to his name against Young, but that came all the way back in 2004. Not many other Tigers have had much success against him, though Rajai Davis has walked in all three of his plate appearances.

While the overall numbers suggest that the Mariners have a big advantage in the starting pitching matchup today, a couple of key splits suggest the opposite. I already touched on Young's middling road splits above, but here's one more: he has 29 strikeouts in 60 1/3 innings on the road this season, a rate of just 4.3 per nine innings. Meanwhile, the Mariners are hitting .245/.295/.347 against left-handed pitching this year, worst in the American League. The additions of Austin Jackson and Chris Denorfia will help, but it's no surprise that the Mariners struggle when their two best hitters have significant platoon splits from the left side.

The Tigers move back into first place today.