Twins 12, Tigers 4: Another day, another blowout loss in Minnesota

It was deja vu all over again. Another game, another loss to Minnesota in blowout fashion. After losing by 14 runs to the Twins Friday night, The Tigers fell by a mere eight runs in game one of today's day-night doubleheader.

Share All sharing options for: Twins 12, Tigers 4: Another day, another blowout loss in Minnesota

The Detroit Tigers needed to recover quickly after Friday night's 20-6 debacle of a loss to the last place Minnesota Twins. Instead, Detroit stumbled about like they were still hung over and ready to go on another bender, finding themselves eight runs down after the game was just three innings old, ultimately falling to the Twins 12-4.

The loss drops the Tigers three games behind the first place Kansas City Royals in the AL Central, the furthest back they have been in the standings all season. The Seattle Mariners own a big lead late in their game this afternoon, meaning Detroit will likely drop a 1 1/2 games out of the second wild card spot.

Desperate for pitching, the Tigers called up three arms from Triple-A Toledo for game one of today's twin-bill. All three would take the mound, but only one pitched well.

Starting in place of injured Anibal Sanchez, Buck Farmer (L, 0-1) looked just like a kid who was pitching in Single-A three short weeks ago and suddenly realized he was in over his head. The rookie was pounded in his second career start, taking the loss by serving up seven runs on five hits and two walks in just 1 1/3 innings.

"We had a couple of young guys pitching, so we knew this was a possible outcome." "Worked out in the worst possible way." -Brad Ausmus on back-to-back blowout losses

Fellow rookie Pat McCoy wasn't any better in relief of Farmer, rocked for five hits and two runs in one inning. Kyle Lobstein was forced to be the sacrificial arm in his major league debut, but he would actually stem the severe bleeding. The Tigers' flaccid offense couldn't take advantage, unable to make up an eight run deficit. Lobstein would run afoul of the Twins' offense in the seventh, allowing his only three runs in what would end up as 5 2/3 innings of work.

Despite a second game on tap tonight, the Twins were forced to use three relievers due to starter Yohan Pino (W, 2-5) lasting just five innings. Despite giving up four runs on six hits, being mediocre was more than enough for Pino to earn his second win of the season.

The Twins would end the day with 14 hits, seven for extra bases. Rookie first sacker Kennys Vargas had a monster afternoon for the winners, driving in five runs thanks to a pair of doubles. Veteran Joe Mauer drove in three runs on two hits, while Jordan Schafer made the most of his one hit, driving in three with a bases loaded triple. Brian Dozier reached base four times on a single and three walks, scoring three runs.

Save for a small uprising in the fifth, Detroit's offense was not up to the task of helping out their young arms. Ezequiel Carrera and Nick Castellanos were the only Tigers with two hits, both driving in a run.

The less said about the last 24 hours, the better. But at the moment, this Tigers team looks nothing like a playoff contender.

Final score: not as bad as yesterday

Kyle Lobstein: In dire need of someone stepping up in the bullpen, Lobstein did just that by eating 5 2/3 innings. He allowed three runs on four hits and walked another four, but the number of innings pitched were by far the most important thing Lobstein brought to the table.

Any member of the Tigers not named Lobstein: Hard to give anyone a ROAR when you're outscored, outhit, outplayed, out-managed and out-you name it in the first two games of the series.

Dave Dombrowski: Brad Ausmus gets his fair share of the blame for the Tigers' rotten play, and much of it is deserved. But he was given a crap hand by his general manager over the past 24 hours. Expecting his team to succeed with a pair of not-ready-for-prime-time pitchers was a fool's errand.

Last night and tonight is why mediocre fifth starters are more valuable than fans think.

FOX Sports Detroit: Their player of the game was ... Miguel Cabrera? He was 1-for-5 with an RBI. What a dominating performance!

Prior to today's doubleheader, the Tigers not only called up game one starter Buck Farmer, who would be considered the 26th man on the roster for today's doubleheader, but also a pair of left-handed pitchers from Triple-A Toledo - Pat McCoy and Kyle Lobstein. The Tigers sent down two lefty pitchers who took part in Friday's debacle to make room - Robbie Ray and Ian Krol.

The Twins first run (of many) featured Brian Dozier scoring from first base ... on a single. Dozier got a huge jump on Buck Farmer's pitch to Joe Mauer, who slapped it into center. The speedy Dozier was nearly to second base when the ball landed, and easily beat Ezequiel Carrera's throw home.

Nick Castellanos drove in the Tigers' first run by doubling to left center, plating Victor Martinez. But he made a glaring base running mistake despite the play happening in front of him. Castellanos was thrown out at third base when the relay throw was cut off by first baseman Kennys Vargas. The throw home was well off-line, and Martinez would have scored either way.

Unlike his first career start against the Pirates, Farmer wasn't fooling anyone today. The Twins rocked the rookie right-hander for a run in the first and six more in the second. Brad Ausmus was forced to go to his bullpen working early on, throwing the newly called up McCoy to the wolves while yanking Farmer after just 1 1/3 innings.

A shell-shocked Farmer could only manage a thousand yard stare. 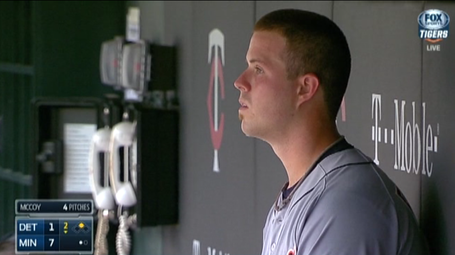 Unfortunately, McCoy couldn't save the bullpen. He surrendered a run on five hits pulled mid-third after an inning of work.

Over the first few innings, the Tigers' performance on offense wasn't any better than their pitching. Eight Twins had at least one base hit and  the team had 11 hits total through four innings. Meanwhile, the Tigers had generated a whole two hits through four frames.

The Tigers did muster three runs in the fifth against Twins' starter Yohan Pino, thanks to a pair of RBI bloops and a seeing eye single. It was something we haven't seen much of late, a few bounces going the Tigers' way. But given a shot to make it an actual game, Detroit batted around but could not break through in a two down, bases loaded situation. J.D. Martinez bounced weakly to third, ending the inning.

Lobstein was next i line after McCoy and in just saving the bullpen from further harm it proved to be a solid outing for the rookie lefty. Making his major league debut in the third inning, Lobstein held the Twins scoreless through the sixth before running into trouble in the seventh. Lobstein would find himself in a bases loaded, one out situation, before Vargas doubled to clear the bases. The three runs made for the final, insurmountable score of 12-4.

McCoy and Lobstein had little time to think about the situation they walked into. Turns out the rookies did not realize the correct start time of the game. They thought first pitch was 1:10 Central, not 12:10.

Patrick McCoy and Kyle Lobstein arrived after the game started today. Flight delayed out of Indianapolis.

Kyle Lobstein said he was in the game 20 or 25 minutes after leaving the clubhouse. McCoy, obviously, had even less time.

From the Department of the Ridiculous to the Sublime - The Tigers received back-to-back complete games from Rick Porcello and Davis Price in Tampa, combining to allow one run on five hits in 17 innings. In the first two games of their series with the Twins, Tigers rookie starters Robbie Ray and Buck Farmer combined for just 2 2/3 innings of work, allowing 13 earned runs on 11 hits.

Lobstein is the first Tigers reliever to throw at least 5 2/3 innings in his major league debut since Roger Mason on September 4, 1984.

Lobstein ended his MLB debut having thrown 100 pitches in his 5 2/3 innings. That is the most pitches thrown by a Tiger in a relief appearance since knuckleballer Steve Sparks tossed 100 in 4 1/3 innings in a 13-3 loss to the Seattle Mariners on July 30, 2003.

In the first two games of the series, the Twins have outscored the Tigers 32-10, while outhitting them just 34-25.