The Tigers have a good chance to split this weekend's series with Max Scherzer on the mound today. Kyle Gibson will start for the Twins.

Share All sharing options for: Game 129 Preview: Tigers at Twins

Kyle Gibson has already made two starts against the Tigers this season -- both at Comerica Park -- and the results have been polar opposites. He was shellacked in their first meeting, allowing six runs on seven hits in two innings on May 10th. The Tigers cruised to a 9-3 victory. Gibson got his revenge on June 13th, tossing seven shutout innings in a 2-0 Twins victory. There wasn't a huge difference in approach the second time around, and Gibson didn't demonstrate a huge improvement in command, throwing just 66 of 110 pitches for strikes.

Many of those strikes were off the plate, which is where Gibson likes to work. He tries to work down and away to all hitters, but especially left-handers. Despite heavy use of his change-up against lefties, they have hit .272/.327/.382 with 25 extra base hits against him this season. Meanwhile, right-handers are not hitting as well overall, but a slightly higher ISO indicates that Gibson is still prone to the occasional mistake against them. He throws his slider 36 percent of the time against righties, but has only given up two home runs with it this year. 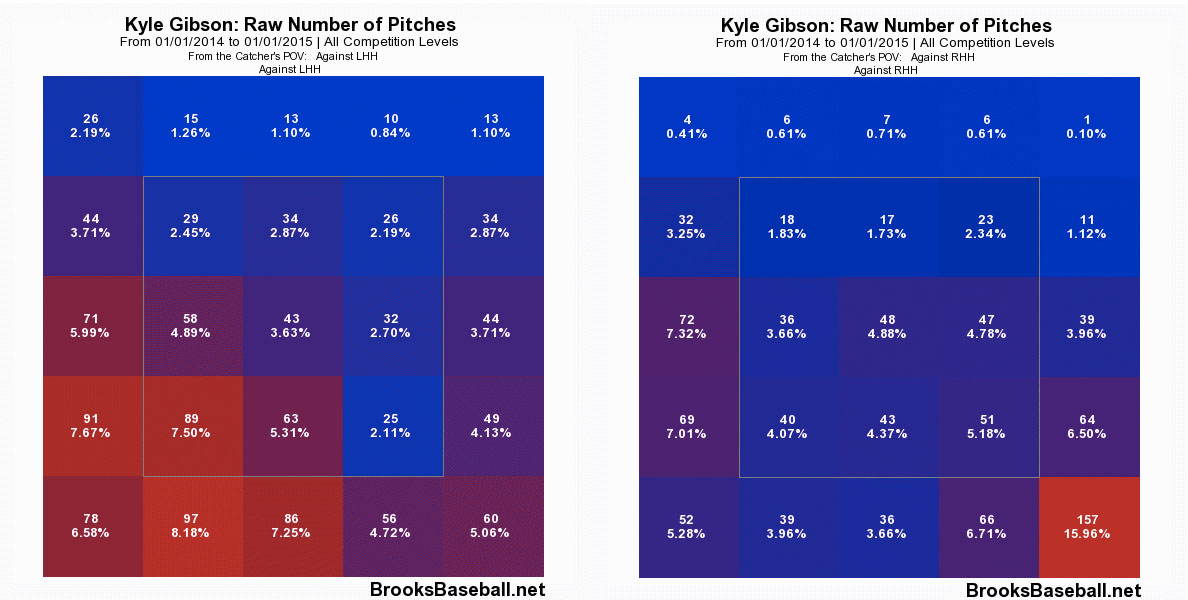 Max Scherzer will need to be much sharper today than he was in his last start, when he walked three and allowed four runs against the Tampa Bay Rays. Scherzer was able to settle down and work through seven innings on 112 pitches, but a poor decision* against James Loney put the Tigers in an early hole that they were fortunate to crawl out of. Scherzer's command was spotty at times, something the Twins have taken advantage of a lot this season. They rank second in all of baseball with a 9.1 percent walk rate and second in the American League with 4.01 pitches seen per plate appearance. That plate discipline paid off the first time Scherzer faced the Twins this year, as he walked four and threw 116 pitches in six innings.

*The pitch -- a fastball inside and off the plate that resulted in a three run homer -- wasn't executed poorly, but Loney was clearly sitting on it all game and it took the Tigers a few times through the order to adjust.

Scherzer is 7-2 against the Twins in his career and has held them to a .696 OPS as a team, but his ERA in 13 starts is an unsightly 4.43. The current crop of Twins have had some success against him, but in limited plate appearances. They have also done a good job of making contact. The 10 Twins that have faced Scherzer before -- not necessarily in a Twins uniform, mind you -- have struck out a combined 24 times in 101 plate appearances. That is slightly below Scherzer's career average of 25.8 percent, and even more impressive when you consider that Trevor Plouffe and Brian Dozier are responsible for 14 of those 24 punchouts in just 26 combined plate appearances.

Gibson has been very inconsistent over the past couple months, alternating great and horrible outings resulting in a 4.83 ERA since he last faced the Tigers. He has given up five runs on five separate occasions since mid-June, but also has five outings with under three runs allowed. If the good-bad-good-bad pattern continues, the Tigers could be in for a rough day since Gibson gave up five runs in his last start. However, they may only need to scratch a run or two across to give Scherzer a chance to even the series.

Scherzer strikes out 10 and the Tigers split the series.