Stop swinging at everything, Ian.

Share All sharing options for: Ian Kinsler's plate discipline has been a problem in the second half

Ian Kinsler won the love of the Tigers fanbase with a huge first half in 2014. He hit .303/.337/.470 with 11 home runs, 51 RBI, and 64 runs scored. He led all American League second basemen with 4.1 WAR, earning his fourth career All-Star appearance. His performance, coupled with Prince Fielder's struggles and subsequent season-ending surgery, made Dave Dombrowski look like a genius (again) after last offseason's trade.

The second half has been a different story.

Something about the All-Star break wreaked havoc on Kinsler's bat, as he has been one of the Tigers' worst hitters over the past five weeks. He is hitting .233/.263/.307 in the second half, a line that looked much worse prior to this last road trip. Before the team's first game in Tampa, Kinsler had a pitiful .515 OPS in the second half.

It's rare to see this significant of a decline at the drop of the hat -- well, unless you're the 2014 Tigers -- especially when Kinsler's first half numbers were similar to his career norms, save for a 4.4 percent walk rate. Kinsler has walked even less in the second half while striking out more, and his poor batting average and lack of power both speak for themselves.

How did things get this bad? We can't be entirely certain based on the data at our disposal, but it seems that Kinsler's eroding plate discipline is the root of all evil. Here's a heat map of what pitches he preferred to swing at during the first half. 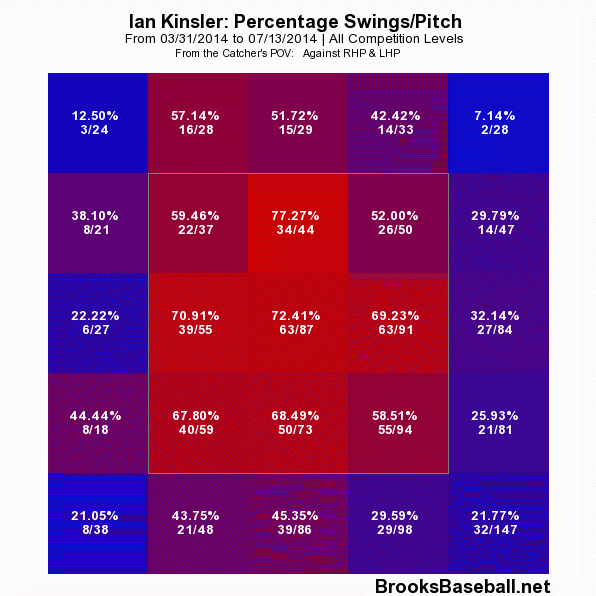 While there is the occasional bright spot outside the strike zone -- Kinsler really seems to like the high fastball -- he swung at 30.3 percent of pitches outside the strike zone, slightly above the league average rate of 29.8 percent. Kinsler has gotten even more aggressive in the second half, swinging at 35.2 percent of pitches outside of the zone. 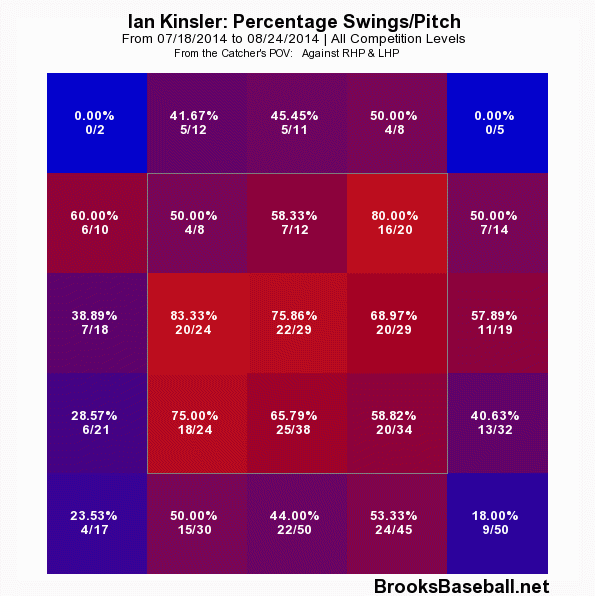 Unfortunately, this lack of plate discipline hasn't translated to a change in Kinsler's batted ball profile. His line drive rate has actually jumped from 18.8 percent in the first half to 20.7 percent after the All-Star break. His pop-up rate has dropped too, despite the eyeball test suggesting otherwise. There seems to be something that we can't see based on public data, though, because Kinsler's batting average on balls in play (BABIP) has dropped by nearly 60 points in the second half.

Fortunately, Kinsler seems to be turning things around. He went 9 for 32 on the last road trip and hit his first (and only) home run of the second half. He also scored nine runs in seven games. He had just eight runs in the month prior to that point, dating back to the end of the All-Star break.

Kinsler's ability to get on base and score runs has been integral to the Tigers' success this year. The Tigers are 47-15 this season when Kinsler scores a run and 15-2 if he scores two or more. If Kinsler can get his plate discipline under control and get back to being the selective hitter he was in the first half, the Tigers could make a serious run for the division down the stretch.