The Tigers will look to solve Yankees starter Shane Greene in their second meeting against the rookie right-hander this season. David Price will take the mound for the Tigers.

Share All sharing options for: Game 131 Preview: Yankees at Tigers

Shane Greene turned in arguably the best start of his young career against the Tigers earlier this month, tossing eight shutout innings in a 1-0 Yankees victory. He scattered five hits and three walks, allowing at least one baserunner in five of his eight innings. It wasn't quite as dominant of a performance as he had against the Baltimore Orioles in July -- he struck out nine in that game -- but it's really hard to hit when a pitcher does this. 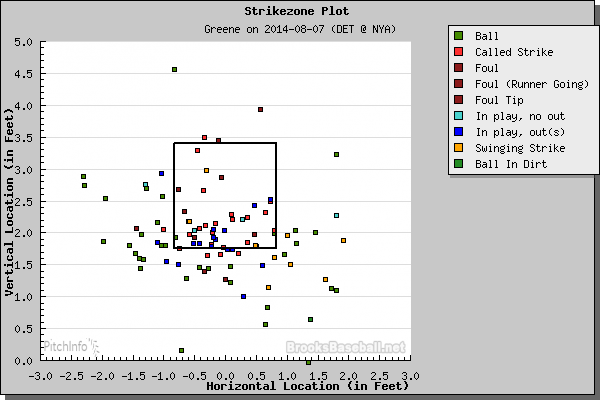 This type of location is nothing new for Greene, as he has pounded the lower half of the strike zone in his eight starts this season. Like Rick Porcello yesterday, Greene has benefitted from some solid infield defense (and a bit of luck). His .227 BABIP on ground balls is well below the league average of .250, and he's generating grounders at a 54.3 percent rate. He generated 14 ground balls in his start against the Tigers, including a pair of double plays.

While the grounders have been Greene's bread and butter during his rookie campaign, he has also shown the ability to put up some high strikeout totals. I already mentioned his nine strikeouts against the Orioles in July, but Greene hit double digits against the Tampa Bay Rays in his start immediately following his outing against the Tigers, fanning 10 in six innings. He also struck out seven against the Chicago White Sox in his last start, but left after throwing 92 pitches in five innings.

David Price has also racked up some gaudy strikeout numbers during his brief tenure in Detroit. He struck out nine Rays in his last start, the infamous one-hit loss that set the Tigers fanbase on edge. While the offense was nonexistent -- more on that later -- Price was brilliant, with no walks in his eight innings of work. It was his third outing of at least eight innings since arriving in Detroit and his second consecutive start without allowing a home run.

Brian McCann doesn't have the sustained success against Price that some of his teammates do -- Derek Jeter and Jacoby Ellsbury are both hitting above .300 in 50+ plate appearances -- but the Yankees' backstop has done some serious damage this season. He is 4 for 10 with three home runs and five RBI in three games, including a solo shot off Price on August 5th. Stephen Drew has not faced Price yet this year, but was 0 for 10 with five strikeouts against Price in the 2013 regular season. He is 2 for 22 against Tigers pitching this season.

Don't look now, but the Tigers offense might be starting to perk up. The hard-luck loss in Price's last start was frustrating, but it marked the only game last week where they failed to score at least four runs. They scored 45 runs during last week's road trip, and are now averaging 4.6 runs per game in the month of August. Victor Martinez's big month (.992 OPS) has carried the team, but Alex Avila's .804 OPS has also been helpful. J.D. Martinez and Nick Castellanos both have an OPS above .700 this month, while Castellanos' 13 RBI are tied for second on the team. If the team can continue their recent hot streak, they could do some serious damage against the rest of the AL Central in September.

The Tigers keep rolling with another well-played game on both sides of the ball.