Andy Dirks is alive and well

Andy Dirks spent three days on a rehab assignment with the West Michigan Whitecaps, and it went as well as we hoped it would.

Share All sharing options for: Andy Dirks is alive and well

As the old saying goes, "What the Tigers really need right now is a glove in that outfield." OK, maybe that's not an old saying, but it's definitely a saying, and that's exactly how it goes.

After undergoing lower back surgery in March of this year, the hope was that Andy Dirks might be ready to return to action in Detroit by late June or early July. Unfortunately, Dirks' path to recovery was delayed, and after a "false start" with the Tigers' A-ball team in Lakeland last month, Dirks was sent to play a few rehab games with the West Michigan Whitecaps to kick off the month of August.

I'm happy to report that his neck looks as good as ever.

Dirks finished the series going 2-for-8, for a nice and even .250 batting average. Not bad, not awesome, but very Dirksian, and that should be good news for Tigers fans.

In the first game of the series, Dirks started in left field and went 1-for-3 in the leadoff spot, playing five innings before being replaced. It was a good 1-for-3, with Dirks ripping the second pitch of the ballgame into right field for a sharp single.

In his next trip to the dish, he drove the second pitch of the at-bat all the way to the warning track in deep right-center for a noisy out. As Whitecaps play-by-play announcer Ben Chiswick later commented in an interview on the Bless You Boys podcast, the power alleys at Fifth Third are rather deep, and that ball would have been a home run in other parks.

Dirks' third at-bat on Friday was less inspiring, as he took a swing at the first pitch he saw and grounded into an inning-ending double play.

I wasn't able to attend the second rehab game, which took place on Saturday, but the raw math tells me he went 1-for-4 in the ballgame, batting in the designated hitter slot. 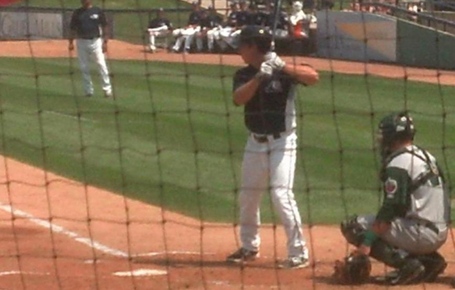 In Sunday's game, Dirks again started in left field and batted in the leadoff spot, this time playing all nine innings, and went 0-for-1 with a routine fly out and three walks. At the Low -A level, it's hard to say whether that was the result of sub-par pitching or because the opposing pitchers were deliberately pitching around Dirks. Either way, he showed good plate discipline and got on base in 75 percent of his plate appearances in the game, so I'll take it.

Sunday's game also featured a bit of base-running work for Dirks. After drawing his first walk, he stole second base and advanced to third when the catcher's throw went into center field. There was a brief heart-attack moment when up-and-coming prospect Javier Betancourt came to the plate and ripped a line drive down the third base line, a shot that had Dirks leaping too late to get out of the way, as the ball ricocheted off his foot.

He was fine, fortunately, and he grinned at Betancourt while pointing towards right field as if to say, "Hit it more in that direction, please." Betancourt walked and was later caught trying to steal second, but he prolonged the run-down long enough for Dirks to dance off the bag at third, pick his spot, and then break for home to score a run before Betancourt was tagged out. In other words, Dirks looked pretty good on the base paths as well.

In the field, Dirks had a few opportunities to run down some routine fly balls, as well as play a line drive off the left field wall, and as one would expect, he looked like a major league professional in the field.

And that, in the end, is what I was hoping to see. After having seen Luke Putkonen's rehab game at West Michigan earlier this year and being thoroughly underwhelmed by his performance, it was nice to see Dirks actually look like what he was: a major league baseball player doing a rehab assignment with a minor league team; a man with MLB-level talent playing among kids with rough-around-the-edges minor league-level talent.

I don't know exactly what the rehab schedule looks like, or what Dirks' project return date is supposed to be, but I would imagine that — based on what I saw in West Michigan — we'll be seeing Dirks back in a Tigers uniform sooner than later.

(Yes, I asked him how his back felt, but he didn't really give me an answer. Probably because he was batting at the time.)