We all hate the Yankees

Share All sharing options for: We all hate the Yankees

Baseball fans across the country and the world have spoken, and these are the teams we love to hate the most: 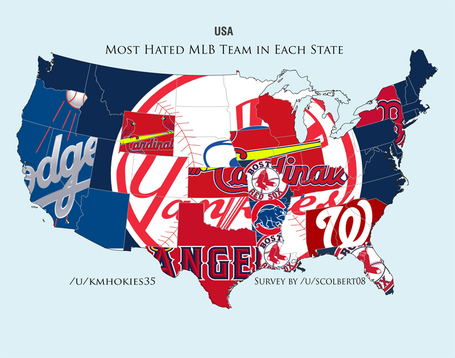 Obviously, a few things need to be said:

1. The West Coast hates itself

2. So does the East Coast

4. Seriously, Louisiana? Do you even watch baseball?

5. I'm not sure Arkansas understood the survey question

But wait, it gets better. Here's how those same numbers shake out on an international level: 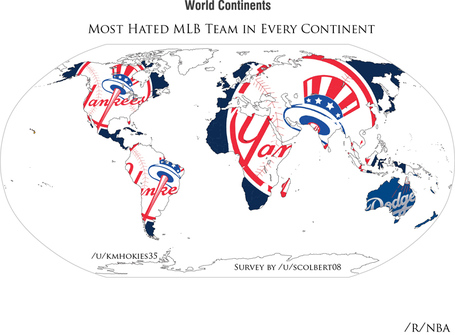 That's a lot of Yankee hate. To be fair, I'm assuming that when participants from other countries saw "Yankees" on the list, they immediately thought of stereotypically air-headed Americans and just went with that answer. But if not, this has got to be one tough year for the international audience as we bombard them with JeterFest 2014.

I can't even begin to imagine why Australia has such a major problem with the Dodgers, so I'm going to assume it has something to do with dark secrets from Vin Scully's past.

Alright, last one. Here are the most hated teams in Canada: 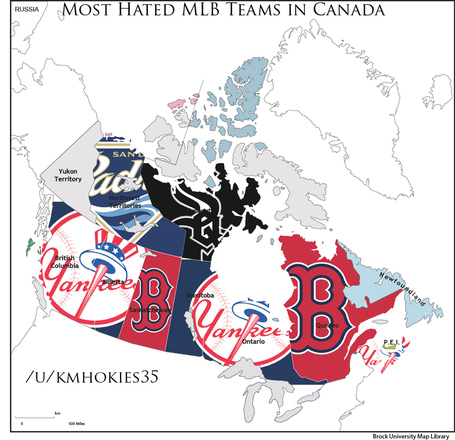 I don't know why I love this so much, but I do. The southern provinces, understandably, are sick to death of the Yankees/Red Sox thing (are you listening, ESPN and FOX?), because ... well, we all are. Notice that even on the East Coast in the United States, they hate one of those two teams. But suddenly, you get up into the northern territories of Canada, and for some reason it's, "Screw the Padres! And also the White Sox!" Why? Well ... why not?

Moral of the story: nobody likes the Yankees. Nobody.