Cheered on by Kate Upton and helped by excellent defensive play, Max Scherzer allowed just two runs over seven innings. But a lack of run support from a no-show offense doomed Detroit's ace to his fourth loss of the season.

Share All sharing options for: Yankees 2, Tigers 1: Max Scherzer gets no support

Despite neither starting pitcher being particularly sharp, both the Detroit Tigers and New York Yankees struggled offensively. But the Yankees overcame Max Scherzer and stingy Detroit defense by Ezequiel Carrera and Ian Kinsler to scratch across a pair of runs in the second inning. A dominant performance from the Yankees' bullpen would make a one run lead hold up over the final four innings in a 2-1 victory over the Tigers.

Helped by some patient Tigers at-bats, Brandon McCarthy (W, 4-0) made the shortest start of his five game Yankees career, pulled after 116 pitches and 5 2/3 innings. Despite the high pitch count, McCarthy left with the lead, having held the Tigers to one unearned run on five hits, striking out eight and walking two.

McCarthy got credit for the win, his fourth straight as a member of the Evil Empire's rotation. But it would be the New York bullpen which made the biggest difference in the game. Four relievers combined to slam the door on Detroit's offense with 3 1/3 innings of one hit baseball, retiring the final seven Tigers in order. Closer David Robertson pitched the ninth to record his 30th save.

Detroit starter Max Scherzer (L, 13-4) wasn't at his sharpest, allowing at least one base runner in each of his first six innings of work. Scherzer would ultimately battle his way through seven innings, giving up two runs on nine hits, walking three while tying his season low of four strikeouts. Scherzer took the hard-luck loss, falling short in his attempt to win what would have been his MLB leading 14th game.

Phil Coke continued to pitch well, tossing a scoreless eighth. But it wasn't enough on a night when the Tigers' bats went silent.

The Yankees weren't an offensive juggernaut, out-hitting the Tigers just 9-6. Jacoby Ellsbury led the Yankees with two hits, driving in their first run with a third inning sacrifice fly. Brian McCann wrapped up the Yankees' scoring with a thrid inning, two out RBI single.

A lengthy top of the second was one of the few innings where the Tigers' offense showed signs of life.  A double, single, and walk  loaded the bases with just one out, yet Detroit didn't score a run. The Tigers also forced  McCarthy to throw 34 pitches in the inning, yet he still struck out the side.

You can have great pitching and defense, but you still need to score runs to win. What little offense the Tigers could muster came from Victor Martinez's two hits. Kinsler drove in the Tigers' only run, singling home Andrew Romine in the fifth.

Ezequiel Carrera: For one night, replace "OH JACKSON!" with, "HOLY CATS!" Detroit's newest outfielder allied fears over center field defense in the third inning when he made one of the best catches you'll ever see on Jacoby Ellsbury's bases loaded drive to deep center. The speedy Carrera laid out to make a ridiculously good diving catch, robbing Ellsbury of three RBI and an extra base hit. Forced to retreat to first base, Derek Jeter's reaction was one word - "WOW."

MLB.com video with several angles of the catch and Mario Impemaba's "Holy cats, did you see that?!"

Here's a looping version as well, so you can watch it in perpetuity.

Yes, this is a Catch of the Year candidate. Thank you, Ezequiel Carrera. http://t.co/CkqBOBsUrP

Carrera also had his first base hit as a Tiger - a two out double in the seventh.

Ian Kinsler: Kinsler pulled off a pair of defensive gems of his own. In the third, not to be out-shadowed by Carrera's grab, Kinsler made a diving grab into the hole, throwing out Chase Headley from his knees to rob him of an RBI single and end the inning. In the fifth, Kinsler went far to his left to grab Brian McCann's chopper before turning and firing to second to start an inning-ending 4-6-3 double play, stranding a runner on third. Kinsler also drove in the Tigers' only run of the game with a fifth inning single.

Victor Martinez: Martinez singled and doubled, the only Tiger with two hits.

Max Scherzer: Pitched in and out of trouble all evening, walking three and scattering nine hits. But Scherzer scratched and clawed his way to a quality seven inning outing, allowing just two runs.

Yankees' base running: Brett Gardner's TOOTBLAN bailed out Max Scherzer, running the Yankees out of the fourth inning. Martin Prado on second and two out, Gardner singled through the shift on the right side. Prado was held up at third and Torii Hunter's throw (shockingly) hit the cut-off man. But Gardner never stopped running, and was well on his way to second when Miguel Cabrera cut off the throw. After a short rundown Garner was tagged out, Predo was still on third wondering what in the Hell Gardner was thinking, and the inning was over.

Injuries: Eugenio Suarez was forced to leave the game in the fifth inning when he injured his left knee while stealing second base. An awkward slide forced Detroit's rookie shortstop to immediately call for a replacement, Andrew Romine entering the game. It's the second time this season Saurez has injured himself sliding into second. He did the same during his first big league appearance on June 4, missing the next two games with a knee sprain. Let's hope it's no more serious than that, otherwise the Tigers may have some major issues at shortstop.

Eugenio Suarez left tonight's game with a left knee sprain and will be reevaluated tomorrow. #tigers

Miguel Cabrera: A walk was the only positive to an otherwise bad game at the plate. Cabrera was 0-for-3, including a weak, first pitch swinging nubber to end the seventh, stranding the game-tying run in scoring position.

Alex Avila: Another rough, rough game with the lumber.  Avila was 0-for-4 and two strikeouts, including a swinging K with two on and one out in the second, and stranding a pair when he bounced out to end the sixth.

J.D. Martinez: The other Martinez had a off night with three swinging strikeouts in his final three at-bats.

Kate Upton, Justin Verlander's significant other was in attendance tonight. Eye candy she may be, good luck she was not.

This ad on the backstop at Yankee Stadium caused more than a little social media confusion with Detroit Red Wings fans in the first inning tonight. 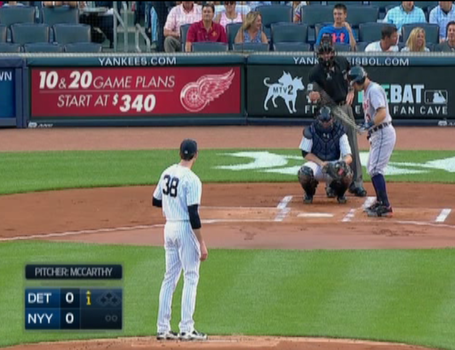 No, the Red Wings aren't buying advertising in New York. It's the "magic" of television. From another angle, you can see the green screen: 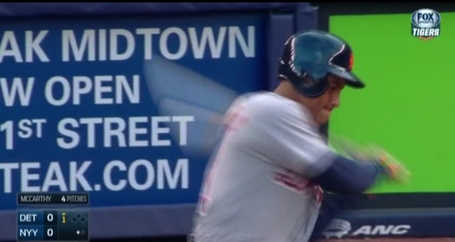 RE: the Red Wings ad behind home plate - it's a green screen. The ad is CGI.

The more you know...

With a right-hander on the mound for the Yankees, center fielder Ezequiel Carrera received his first start as Tiger. His last appearance in a big league starting lineup was May 4 of last season, as a member of the Indians.

Carrera's double in the seventh was his first hit as a Tiger.

The acquisition of David Price has lit a fire under the other four members of Detroit's rotation. Max Scherzer extended the rotation's streak of pitching at least seven innings while allowing just two runs or less to four games. Over the past four starts, Justin Verlander, Rick Porcello, Anibal Sanchez and Scherzer have thrown a combined 30 innings, allowing just 6 earned runs, a 1.80 ERA.