With only two exceptions, every MLB team earns high ratings locally. But no team does better in their market than the Detroit Tigers, who own the highest local TV ratings in baseball

You love your Detroit Tigers and the local broadcast ratings of FOX Sports Detroit prove it.

Using data collected between March 31 and July 24, Forbes broke down the Nielsen ratings of the 29 U.S.-based teams. The Tigers dominate local television as the highest rated team in all of baseball, owning numbers nearly a full ratings point higher than any other franchise.

All these teams earn better ratings than traditional over-the-air broadcast networks and cable juggernauts such as ESPN.

We may be a country of college football and NFL fans, but any rumors of baseball dying has been highly exaggerated. The local ratings say as much. 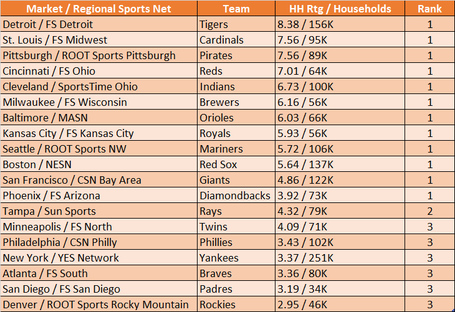 The good news is you can expect the high payroll Tigers to reap the rewards of a massive new contract with FOX when their current deal expires in the early 2020's. They currently earn approximately $40 million a season on a deal agreed upon in 2008. That's pocket change compared to newer regional contracts, where the Dodgers haul in over $240 million a season and even the lowly Astros rake in $80 million per year.

But there is a fan downside to the ratings bonanza. If you hope to see local blackouts lifted and being allowed to bypass FOX Sports Detroit by watching the Tigers via local access on MLB,TV, that's not happening. MLB and the cable carriers will milk the live sports cow until it's completely dry. So get used to paying for a cable TV subscription if you live in the same market as your favorite team.