Joba sticks his tongue out at Derek Jeter

"He's going to head nod me, I'm going to stick my tongue out at him."

Share All sharing options for: Joba sticks his tongue out at Derek Jeter

Prior to the four-game series against the New York Yankees which began on August 4, Joba Chamberlain told the press that he really hoped he'd get a chance to pitch against Derek Jeter. The New York Post (among other sources) quoted Joba as saying, "I would like to have that one at-bat to get that head nod I've seen for so long. He's going to head nod me, I'm going to stick my tongue out at him."

As fate would have it, the Tigers and Yankees went into extra innings on Tuesday night, Joba got his chance to face Jeter, and the moment did not disappoint: 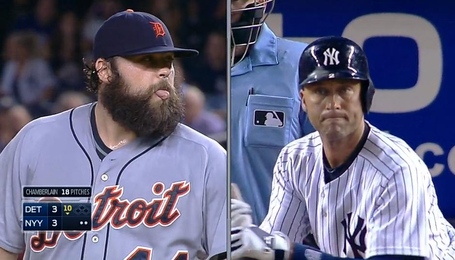 Something about that image, though ... it's the tongue, and the beard, it reminds me of something ... oh, yeah, that's it! 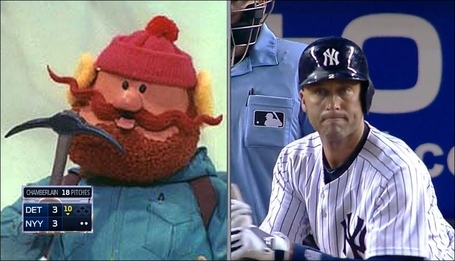