Ninth inning back-to-back home runs off the bats of rookies Nick Castellanos and Eugenio Suarez gave the Tigers a wild come-from-behind win. Starting pitcher Anibal Sanchez was removed from the game in the fifth due to a pectoral injury. No word as of yet if he'll miss any time.

Rookies came to the rescue in the Detroit Tigers' come-from-behind win over the Toronto Blue Jays. Back-to-back home runs off the bats of Nick Castellanos and Eugenio Suarez off Blue Jays closer Casey Janssen turned a 4-2 deficit into a 5-4 victory. The victory allows the Tigers to maintain their 2 1/2 game lead in the AL Central over the surging Kansas City Royals.

As good as the comeback win was for the slumping Tigers' psyche, there was bad news. Starting pitcher Anibal Sanchez was removed in the middle of the fifth inning having suffered what was later announced to be a pectoral injury.  Post-game, Tigers manager Brad Ausmus addressed the injury, confirming Sanchez will head back to Detroit on Saturday for an MRI and a "more concrete" diagnosis.

Sanchez had allowed all four Toronto runs and 10 hits in his 4 2/3 innings of work. In need of an extended outing, the bullpen came through in big way. Blaine Hardy took over for Sanchez and tossed 1 2/3 scoreless innings. Al Alburquerque (W, 3-1) took over with one out in the seventh, tossing another 1 2/3 scoreless innings and receiving credit for the win.

Closer Joe Nathan took a walk on the wild side in the ninth inning, loading the bases on a single and a pair of walks before recording the final out and earning his 24th save.

Knuckleballer R.A. Dickey got the start for the Blue Jays, exiting with the lead after six innings, allowing two runs on five hits, walking four and striking out six. The bullpen kept the Tigers at bay until the ninth, when Janssen was pounded for four hits (all for extra bases) and three runs in just 2/3 of an inning. Janssen (L, 3-1) was hung with both his first loss and third blown save of the season.

Detroit had been held in check over the first eight innings on five hits. They then exploded for two doubles and the back-to-back home runs in a wild ninth. For much of the game, Ian Kinsler supplied the majority of the Tigers' offense with three hits, including a two RBI single in the third. Rajai Davis chipped in with a pair of doubles and a run scored.

The home runs would come from an unexpected source; the all-rookie left side of Detroit's infield. Castellanos hit a two-run bomb to knot the game at 4-all (MLB.com video), going deep for the eighth time this season. Saurez's game-winning solo shot came two pitches later (MLB.com video). It was his fourth home run of the season and first since June 14.

The bullpen: Despite being forced into extended duty, Blaine Hardy and Al Alburquerque kept the Tigers in the game. They did their jobs well, combining for 3 1/3 innings of scoreless relief.

The rookies: The Tigers' offense snoozed their way through eight innings. In the ninth, Nick Castellanos and Eugenio Suarez woke up the offense with a start, going deep on consecutive at-bats against Blue Jays closer Casey Janssen. In less than a minute, Castellanos and Saurez turned a 4-2 deficit into a 5-4 lead.

Saurez is one happy rookie... pic.twitter.com/rYPXnHSkqH

Rajai Davis: Offensively, Davis was solid out of the leadoff spot with two hits and a run scored. But he made the defensive play of the game when it was most needed. Bottom of nine, Joe Nathan had pitched himself into big trouble. Two out and the bases loaded, Josh Thole lifted a flair into left field foul territory. Davis, who had shifted to left field from center to start the inning, raced in to make a sliding, game-ending catch. 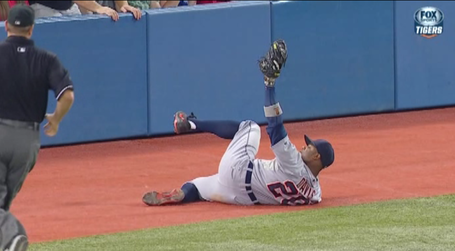 YES! Rajai Davis' sliding catch in foul territory bails out Joe Nathan and gives the Tigers a wild come from behind 5-4 win! I need a drink.

J.D. Martinez's second inning: The second could not have gone any worse for the slumping Martinez. He bounced into a fielder's choice in the top of the inning. But things got ugly when he took the field. To start the inning, Martinez dropped Munenori Kawasaki's liner, which was generously ruled a two-base hit. That kicked off an ugly three-run inning for the Jays. One of the runs scored uncontested when Martinez later booted Melky Cabrera's single. But to Martinez's credit, he started the big ninth inning rally with a lead off double.

Miguel Cabrera: Another far too quiet game from the Tigers' slumping slugger, 0-for-5 with a strikeout.

The heart of the batting order: Cabrera, Victor Martinez, Torii Hunter and J.D. Martinez combined on a 2-for-16, five strikeout, one walk performance.

Detroit's defense: The defense has developed this annoying habit of extending innings and raising pitcher ERA. J.D. Martinez was charged with one error, and should have had another. Nick Castellanos committed one of his own in the fourth.

Apparently the left side of the Tigers' defense doesn't plan on using their gloves tonight.

Tigers rank 29th in baseball in fielding - DRS (-41). Not surprising if you've seen a lot of their games.

Injuries: As soon as the Tigers got Torii Hunter back, another player went down. Anibal Sanchez was forced to leave the game in the fifth inning.

J.D. Martinez has turned back into a pumpkin (or Matt Tuiasosopo). Entering tonight's play, Martinez was hitting .185/.254/.323 since the All-Star break. He didn't help his stats much with a 1-for-4 night.

Tonight's 0-for-5 performance drops Miguel Cabrera on the road trip to 1-for-15 with five strikeouts.

Joe Nathan has seven consecutive scoreless outings and has allowed just three runs (all in one game) in 12 appearances since July 1.

Nick Castellanos and Eugenio Suarez went deep on consecutive pitches in the ninth, giving the Tigers their winning margin. The last Tigers' rookies to hit back-to-back home runs was Craig Monroe and Eric Munson in 2003.

Blue Jays closer Casey Janssen had given up three home runs in 32 appearances this season. He allowed two big flies on two pitches in the ninth.