How consistent is the Tigers offense from week to week? Let's look at the chart.

Share All sharing options for: That streaky Tigers offense (in graph form)

The problem with these Tigers is that their offense is so inconsistent, amirite? It's always so #FeastOrFamine with these guys!

The trouble with evaluating such things is that the human memory only retains so much information in the short term, and a week's worth of watching Tigers games can certainly lead to the perception that the offense is always ping-ponging. One week, they're tearing the cover off the ball, the next week, they couldn't find the ball if it was wrapped in bacon and they had a bloodhound assisting in the hunt.

Here's what the Tigers' collective OPS has looked like this year, on a week-by-week basis: 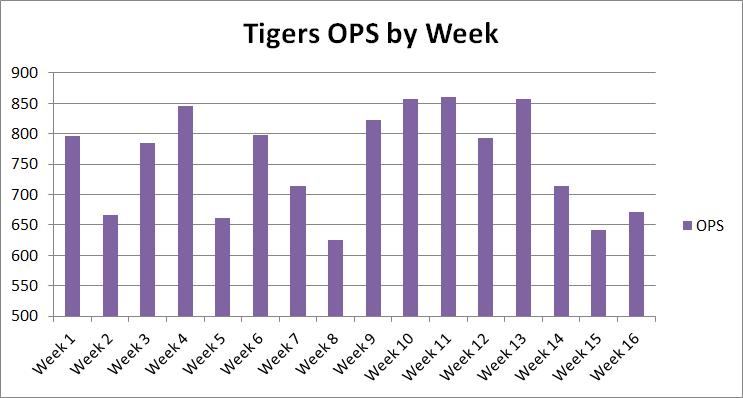 The American League average has been right around the .714 mark so far this year, and the Tigers have been at or above that average 11 out of 16 weeks. But the graph above also confirms what the eye test suggests: some weeks are dramatically worse than the previous week. Check out that 130-point drop from Week 1 to Week 2. Or that 183-point drop from Week 4 to Week 5. Most recently, there was a 143-point drop between Week 13 and Week 14.

Still, the numbers suggest that the peaks and valleys are not as erratic as they may seem. The offense is never going to post the exact same numbers from week to week, and there will always be variations, whether negative or positive. For many of these weekly slices, the Tigers are putting up fairly consistent numbers: 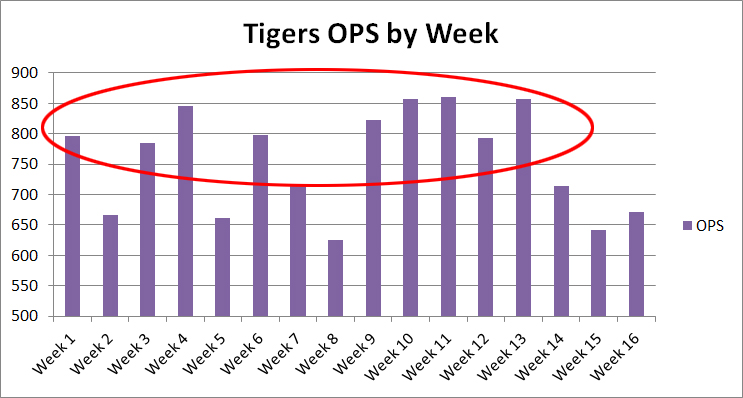 At the very least, we can see that sharp drop-offs are often followed by large gains in the following week. So you don't like how the team is hitting this week? Stick around, it will change next week.