Drew Smyly was a good pitcher with the Tigers. He has been even better with the Tampa Bay Rays.

Share All sharing options for: Why is Drew Smyly pitching better now?

The Tigers thought they were upgrading their rotation when they traded Austin Jackson and Drew Smyly for David Price at this year's trade deadline. While this is probably true, small samples can play weird tricks on us. Like when you think that maybe the Tigers bullpen might be sort of OK after they had a few good games. Then Phil Coke gives up 12 runs.

One of those small samples may be happening down in Tampa right now, where Drew Smyly has pitched like an ace since the trade deadline. Since being traded to the Rays, Smyly is 3-1 with a 1.70 ERA and 0.76 WHIP. He has 44 strikeouts and 11 walks in 47 2/3 innings. He threw the first shutout of his career last month, roughly 130 starts quicker than it took Rick Porcello to accomplish the same feat.

Clearly this means that the Tigers lost the trade, right? Not necessarily. Smyly has been better in his seven starts with the Rays, but he's no Clayton Kershaw just yet. He has a very-good-but-not-quite-elite 3.06 FIP with the Rays, and his xFIP is even higher at 3.41. He has also benefitted from an unsustainable .184 BABIP and an 88.8 percent strand rate. His defense has yet to let a runner reach base because of an error. It's still just a seven start sample. Hell, Armando Galarraga held a 3.17 ERA through 25 starts in 2008. Flukey things happen.

Looking deeper, however, there is reason to believe that Smyly has improved. His pitch selection has changed since leaving Detroit, playing closer to his strengths. With the Tigers, Smyly relied heavily on a fastball-curveball combination, with his cutter/slider* serving as a tertiary option. Since joining the Rays, Smyly has upped his cutter use significantly, jumping from 13.6 percent to 20.4 percent. He has dropped both his fastball and curveball usage slightly, giving him a better-rounded three pitch mix. He has also has a rarely-used changeup that I am ignoring because it hasn't yielded anything significant (which is why the upcoming tables won't add up to 100%).

Why does this matter? PitchFX's pitch values show that Smyly's cutter is one of his best pitches, while his fastball has been less effective. The numbers bear this out as well, as opposing batters are hitting .270 off the fastball, but just .225 off his cutter. The cutter has yielded a higher percentage of extra base hits -- as bad cutters/sliders are wont to do -- resulting in a nearly identical slugging average. If we're keeping score, the curveball has yielded a lower average and slugging average than both the fastball and cutter.

**For some reason, Fangraphs has decided to define Smyly's curveball as a slider. At least they got the cutter part right.

Smyly also seems to be attacking the strike zone differently than before, particularly with two strikes. With the Tigers, Smyly primarily went to the bottom of the strike zone to get outs. 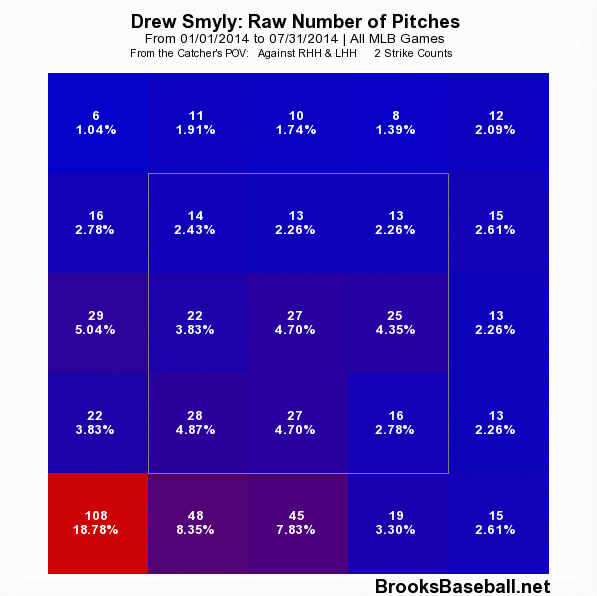 With the Rays, Smyly has worked both above and below the strike zone. An uptick in fastball use with two strikes (particularly against lefties) indicates that the Rays have worked on elevating the heater with two strikes to get swings and misses. Given his increased strikeout rate since arriving in Tampa, it seems to be working. 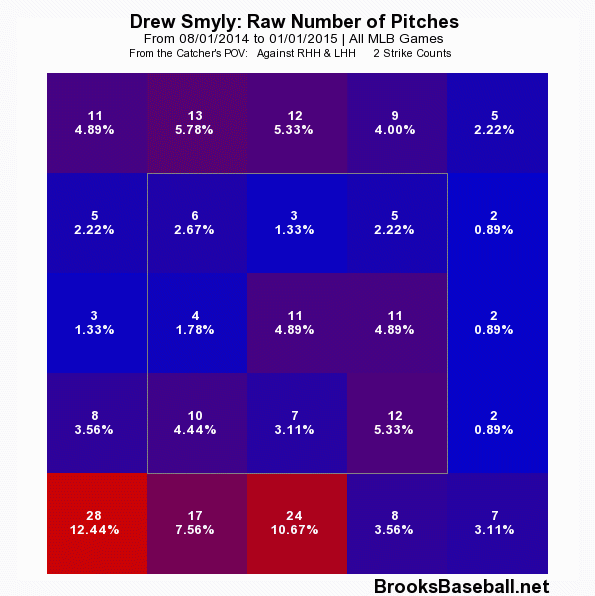 All of that said, we're still looking at a seven game sample size. Smyly could come back next year -- he has already been shut down for 2014 -- and lay an egg just as easily as he could continue to make Rays fans (mostly) forget David Price. His improved pitch selection and increased focus on moving the ball around the strike zone seem like promising trends, but it's tough to say how sustainable his production will be given the low BABIP and high strand rate. This is not to say that the Tigers screwed up in trading Smyly, as the big changes made to his (and David Price's) in-game strategy seem to hint towards different organizational philosophies in attacking opposing hitters. For now, Smyly has a solid end of his 2014 season to build upon in 2015.