What is wrong with David Price?

It could be nothing. Or it could be something. Either way, let's hope Price figures it out soon.

Share All sharing options for: What is wrong with David Price?

When the Tigers acquired David Price at this year's trade deadline, the starting rotation was the last thing anyone expected to worry about. There were questions about the Tigers, to be sure. But they largely revolved around the bullpen and whomever was to replace Austin Jackson in center field.

Now, after seven starts resulting in an unimpressive 4.08 ERA, we have to ask: what happened to David Price?

Price was having arguably the best season of his career prior to being traded, allowing a 3.11 ERA and 2.92 FIP in a league-leading 170 2/3 innings. He had 189 strikeouts to just 23 walks in 23 starts, an impeccable 8.22 strikeout-to-walk ratio. The only blemish on his record (if you can even call it that) was a then-league-leading 20 home runs allowed.

Since then, Price has been a bit more volatile. He has three starts of seven innings or more with one run allowed, but has also been knocked around for five (or more) runs in a pair of outings. He has continued to strike out over a batter per inning and cut his home run rate, but is walking a slightly higher percentage of hitters. His FIP and xFIP have adjusted slightly because of this, but still indicate that he has been an elite starting pitcher.

While Price's high ERA doesn't mesh with his excellent peripherals, it seems to be a product of the small sample of starts he has had. In particular, Price's awful start against the New York Yankees has wreaked havoc on his ERA and WHIP. Without those numbers in the equation, Price has a 2.72 ERA and 0.93 WHIP. If you go further and remove just two innings -- that meltdown against the Yankees and the first inning of his last start against the San Francisco Giants -- then his numbers look even better.

Unfortunately, teams can't remove individual innings from their win-loss records, and Price's bad moments still count. The numbers don't show much difference in his performance since arriving in Detroit, but there are a couple of trends -- besides the crappy defense -- that could be leading to his rough innings.

While pitching for Tampa this year, opposing batters hit .238/.268/.379 off Price. Since arriving in Detroit, they are hitting .243/.281/.376. That's a 10 point difference in OPS, which should not result in a full run difference in ERA. Except it is. Before you go blaming the baseball gods, think back to the differences in pitch selection that I pointed out with Drew Smyly yesterday. Smyly started using his cutter more against the Rays because it has been a more effective pitch.

That considered, it should come as no surprise that the Tigers have altered Price's pitch distribution. Price has cut down on the use of his curveball since arriving in Detroit, instead opting for a sharp increase in the use of his changeup. In fact, Price has all but removed breaking balls from the equation, throwing a fastball or changeup nearly 85 percent of the time since joining the Tigers.

Normally, this shift in philosophy would make sense. Price's changeup is one of his best pitches, while his curveball is probably the weakest pitch in his arsenal. The relative stability of his strikeout rate and OPS allowed suggests that it hasn't made a big impact on how opposing batters attack him at the plate. However, there are a couple of reasons why this emphasis on the changeup could be an issue. First, Price's whiff rate has declined from 11 percent to 9.6 percent while his first pitch strike percentage has dropped by nearly 10 percent since the trade deadline. Neither of these have impacted his strikeout rate, but they are both troubling signs.

Also, look at where Price has attacked opposing hitters in the strike zone. First, his 23 starts in Tampa. 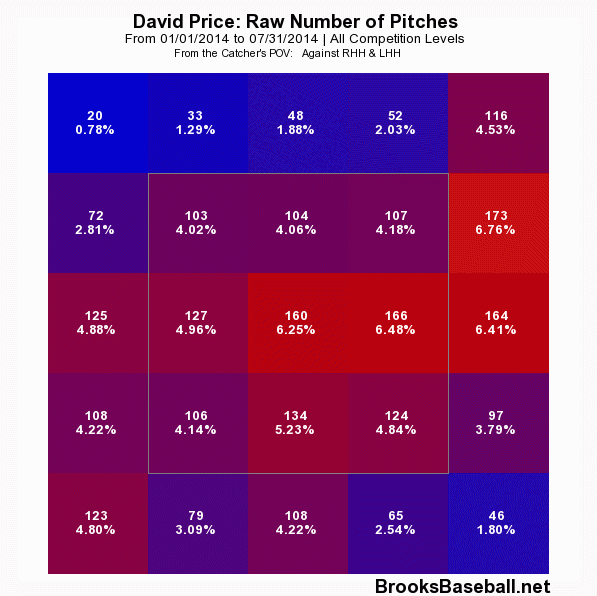 With the fastball-changeup combo in Detroit, Price has primarily worked on the outer half of the plate against right-handed hitters, essentially cutting the strike zone in half. 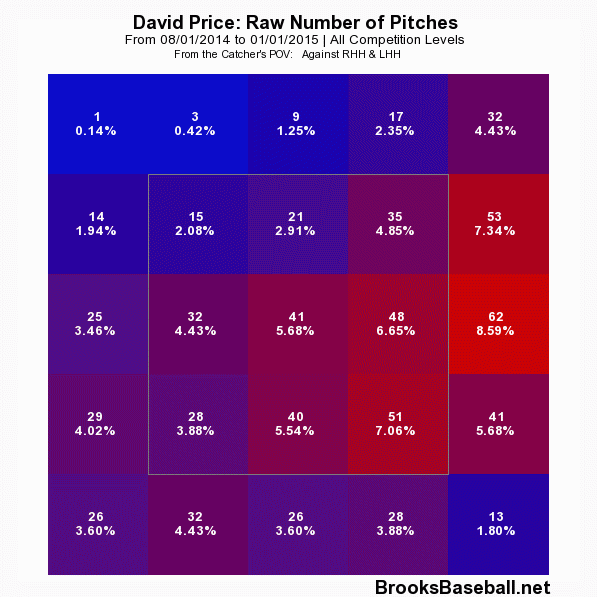 By ignoring the left side of the plate -- the inner half to right-handed hitters -- opposing batters are able to concentrate on half of the strike zone and make better contact. Couple this with a more predictable pitch sequence and it's easy to see why Price has struggled at times with the Tigers. Part of this may be a feeling-out process between pitcher and catcher, particularly if Alex Avila and company aren't comfortable with handling Price's breaking pitches yet. However, using a better mix of pitches and working both sides of the plate may be the solution to Price's issues.