The Tigers are alone in first place and would like to keep it that way. Tonight, Kyle Lobstein faces young flamethrower Danny Salazar.

Share All sharing options for: Game 148 Preview: Indians at Tigers

Danny Salazar did unspeakable things to the Tigers' offense 10 days ago, scattering eight hits while throwing his first career shutout. He struck out nine and didn't walk a batter. He generated 20 whiffs on a season-high 118 pitches, 14 of which came against his fastball. Normally one of the best fastball hitting teams in the majors -- the Tigers rank fifth in baseball, according to Fangraphs' pitch values -- the Tigers could not do anything with Salazar's high 90s heat. He was very effective in getting the pitch above the strike zone, but also spotted it well on the outside half of the plate. 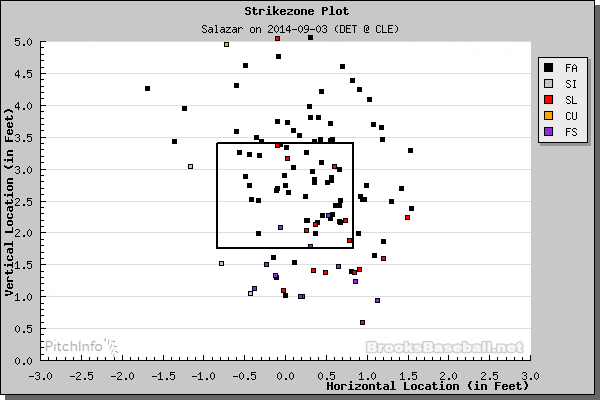 As good as Salazar was against the Tigers, he was that bad against the Los Angeles Angels in his next start. He threw just 58 of his 91 pitches for strikes, including 13 of 23 first-pitch strikes. The big problem, as you may have surmised, was his fastball. Salazar threw 88 fastballs in his start against the Tigers last week. Of those 88 heaters, 62 were strikes. Against the Angels, Salazar was only able to hit the zone with 44 of 73 fastballs, a 60.3 percent rate.

While his splitter and slider can be very good secondary pitches, everything Salazar does is based off of the fastball. He doesn't seem to have the ability to work backwards through the count yet, as his high fastball usage to begin an at-bat attests. The Tigers will need to show discipline in order to ensure they are swinging at actual strikes, but controlled aggression -- namely, attacking the first pitch fastball -- could be the name of tonight's game.

The third time was the charm for Kyle Lobstein, as he recorded his first major league win in his last outing with a 6-1 victory over the San Francisco Giants. He was not as dominant as he was in his start against the Indians on September 2nd, but held the Giants to a run on four hits in 5 2/3 innings. Lobstein was much more efficient this time out, needing just 86 pitches to retire 17 batters before exiting a close game (at the time). The decision to pull Lobstein was a curious one, but worked out well for the Tigers. Regardless, the outing still earned the Tigers' newest starter his first big league nickname.

Danny Salazar has dominated the Tigers in his brief career, holding them to a 2.96 ERA in four starts. He has a 6.73 strikeout-to-walk ratio and has held Tigers hitters to a .673 OPS. There are a couple of Tigers hitters with some success against Salazar in the past -- Miguel Cabrera and Victor Martinez, naturally -- but most have struggled. Torii Hunter is just 3 for 14, Rajai Davis is 1 for 6, and J.D. Martinez struck out in all four of his plate appearances last time these two faced off.

Lobstein passed yet another stiff test in his last start, but tonight's game poses a different type of challenge. Can he shut down the same lineup twice? Robbie Ray failed his exam miserably against the Minnesota Twins last month, recording just four outs. Lobstein will likely do better, but the extent of that improvement will be determined on whether he can command his pitches. Starting a rookie in a pennant race wasn't part of the Tigers' plan this year, but things still seemt o be looking up. The Kansas City Royals can do no better than a split with the lowly Boston Red Sox at this point,  so another win ensures that the Tigers will end the weekend at worst in a virtual tie for first place.

Lobstein's iffy command and the Tigers' defense get exploited tonight, dropping them back into second place.