The Tigers go for the sweep today against the Cleveland Indians. Justin Verlander and Trevor Bauer are the starting pitchers.

Share All sharing options for: Game 149 Preview: Indians at Tigers

The Tigers got to Trevor Bauer in their last meeting, scoring four runs on six hits and four walks in 5 2/3 innings, eventually winning 11-4. The walks are notable because it was the fourth time Bauer had walked four or more hitters in his last seven starts. He found his control in his last start, walking one while striking out eight in eight innings against the Minnesota Twins. He gave up four runs in a rough fourth inning, but was otherwise excellent. He only allowed two baserunners outside that run-scoring inning and had five 1-2-3 frames.

While Bauer has the ability to throw a zillion different pitches -- seriously, his Brooks page is ridiculous -- he has been relying on his curveball and cutter more often in the second half. Whether this is by design or just a matter of circumstance, it has resulted in him sticking to the outer half of the strike zone. 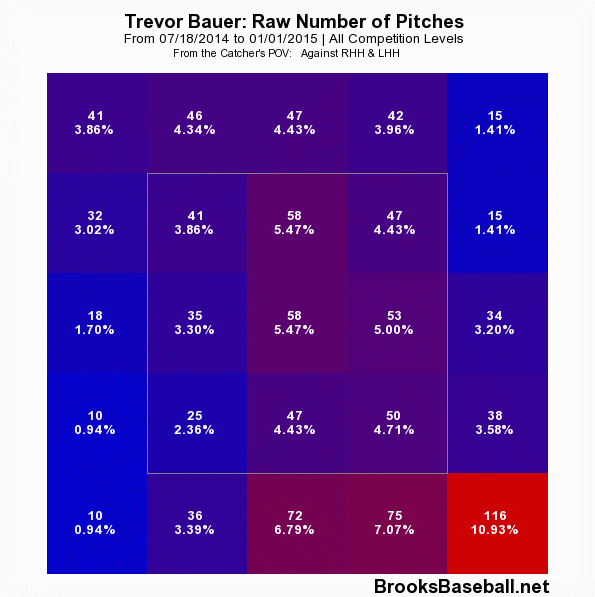 During the first half, Bauer used his four-seam fastball up in the strike zone to great effect, inducing plenty of swings and misses with the high heat. The numbers show that this new strategy hasn't helped, as his ERA has climbed while his strikeout-to-walk ratio has dipped. 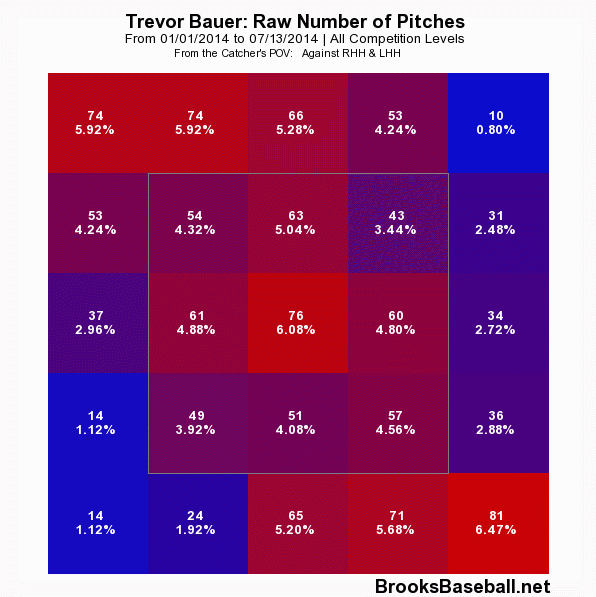 "Good enough" is probably the best phrase to describe Justin Verlander's last start. Staked to an early lead, Verlander gave up four runs on six hits in seven innings as the Tigers won comfortably, 9-5. He only struck out four, but walked one and was an unfortunate outfield collision away from a quality start. However, Verlander threw just 34 of 54 fastballs for strikes, and had to rely heavily on his offspeed pitches to keep the Royals at bay. The strategy kind of worked -- Verlander had three 1-2-3 innings on the afternoon -- but did not do anything to ease the concerns of his detractors.

The Indians have dominated Verlander this season, hitting .307/.364/.475 as a team in four meetings. Verlander has 24 strikeouts in 24 2/3 innings, but has allowed a 4.74 ERA and 1.62 WHIP. Carlos Santana has done the most damage, hitting two home runs. Michael Bourn has added a pair of doubles this year, while Jose Ramirez went 3 for 4 in their matchup 11 days ago. Verlander gave up seven runs (six earned) on nine hits in 6 2/3 innings in that outing.

Don't look now, but the Tigers have quietly awoken from the doldrums that have plagued them throughout the second half of this season. They are 14-7 in their last 21 games, including winning five of their last six. Last night's win helped them improve their home record to a respectable 40-33 after playing below .500 ball at Comerica Park for most of the year. With a six game road trip capped off by The Biggest Series of the Season coming up, it would be nice to start the week in first place.

Plus, we wouldn't have to actually root for the Red Sox.

Verlander is "good enough" again and the Tigers sweep.