The Twins walked off despite blowing a 2-0 lead in the top of the ninth. After last at-bat, home run heroics from J.D. Martinez gave the Tigers a 3-2 lead, Joe Nathan and Ezequiel Carrera combined to snatch defeat from the jaws of victory.

The Detroit Tigers had been riding high, winners of four straight and 7-of-8. Behind an uncharacteristically strong eight innings from Ricky Nolasco, the power bat of Kennys Vargas, along with the Tigers' own Ezequiel Carrera and Joe Nathan, the Minnesota Twins knocked off Detroit 4-3. The game came down to a wild ninth inning, the two teams combining for five runs, the Twins getting the last two and a walk-off win.

Despite snatching defeat from the jaws of victory, the Tigers' lead in the Central over the Kansas City Royals remains at 1 1/2 games. The Tigers needed help from the Chicago White Sox and got it. The Royals also blew a late lead in their game, falling 7-5 at home.

Nolasco entered the night rocking a 5-11 record and 5.64 ERA. Tonight, he pitched like Cy Nolasco, shutting out the Tigers on five hits, striking out five and walking just one in his eight innings of work. Glen Perkins was called on to close, only to give up a ninth inning, two-out, three-run home run to J.D. Martinez. Thanks to the Twins' coming back in the bottom of the inning, Perkins vultured a victory.

"It happens. Unfortunately, it's not going to be easy. Tonight proves it." -Brad Ausmus on the heartbreaking loss

As the cliche goes, Rick Porcello deserved better. Victimized by no run support for eight innings, giving him no safety net, Porcello allowed just two runs on seven hits, striking out five while walking two over eight full innings. The Tigers finally gave Porcello a lead thanks to their three-run ninth inning rally, but struggling closer Joe Nathan (four words I've used far too much this season) asked to protect it.

After Martinez's home run heroics in the top of the inning, the Twins looked dead in the water. Nathan and Carrera gave them CPR. Nathan was tagged for two hits, a walk and two runs in taking the loss, receiving a great deal of help from defensive replacement (term used loosely) Carrera.

Carrera helped to bury his closer by making one of the dumbest, most ill-advised defensive plays you'll ever see, turning Kurt Suzuki's single into an RBI double when he failed to make a diving catch, the ball rolling past him to the center field waring track. Instead of runners on the corners and one out, the winning run was standing on second and the game was tied. The Twins finished off the comeback on Aaron Hicks' RBI infield single, walking off on Nathan and the Tigers.

Nathan was asked about Ezequiel Carrera's all or nothing dive coming up nothing, to his credit he didn't throw the career 4A player under the bus.

"I love aggressiveness. I want players giving 110%, I'll never fault him for that. Would we have taken a single? Yes, but he's giving 110%."

Brad Ausmus was a little more terse when asked about Carrera's dive and if he had been reminded about keeping the ball in front of him.

"If Ezequiel Carrera could do it over, he would contain that line drive to center."

Rick Porcello: Deserved a win, and would have gotten it if not for that meddling manager, center fielder and closer. Porcello went eight innings, allowed two runs and ended up with a no-decision.

Brad Ausmus' strategy: Where to start? There's so much to choose from.

2. In a game where the Tigers had few offensive chances, Ausmus didn't pinch-hit for a struggling Don Kelly in the seventh inning, leaving the more powerful lefty bats of Steven Moya and even Tyler Collins on the bench. Kelly remained in the game to face Ricky Nolasco, sending a lazy can of corn to left, ending the inning.

3. As Ausmus is a baseball bible button-pusher, he automatically called on his (very shaky) closer to pitch the ninth despite Rick Porcello's pitch count of 103 after a 1-2-3 eighth inning. Including tonight, Porcello has thrown 103 pitches or more in a start 13 times this season and had four complete games. But the baseball bible decrees you start the ninth inning by giving your closer a clean slate, no matter what. So no Porcello.

4. Then add Ausmus' penchant for mass personnel changes into the mix, removing his best offensive players despite the games being close and owning an undependable bullpen. The love for defensive replacements gives us such things and Ezequiel Carrera in center field and yanking the bats ofJ.D. Martinez and Miguel Cabrera out of the game. Pulling his best bats out of a game was something Jim Leyland would rarely do.

5. As for continuing to use Joe Nathan over Joakim Soria in the ninth, I'm guessing that's more of an organizational decision. Though tonight may have been the last straw. When asked about using Soria, this was Ausmus' reply.

So there you go.

Injuries: The Tigers were down two starters, Alex Avila and Nick Castellanos. Their replacements, Bryan Holaday and Don Kelly, went hitless, though Holaday did throw out a base runner.

Ian Kinsler's base running: A lead off TOOTBLAN is no way to start a game in the middle of a pennant race. Kinsler gets thrown out on the bases more than a drunk gets thrown out of skid row bars.

Don Kelly: Not a good game for Donnie Baseball, who came to the plate far too often with runners on base. Kelly bounced into an inning-ending double play in the second, popped up with a runner in scoring position in the fifth, and flew out to short left with two on and two out in the seventh.

Joe Nathan: The 39-year-old closer has become little more than a roll of the dice. Nathan can't be trusted in in back-to-back outings, allows too many base runners, has lost a foot off his fastball and if his slider isn't working (as seen in his last two outings), he's essentially throwing batting practice. Tonight was just more of the same.

Ezequiel Carrera: Why didn't Austin Jackson ever dive? This is why. 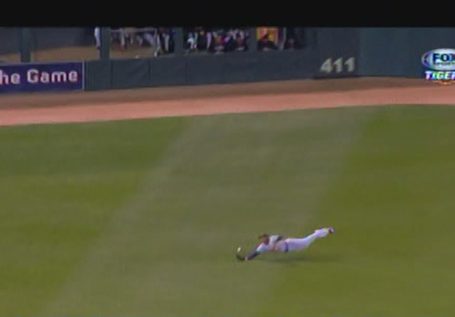 There was nothing but lots and lots of green behind Carrera. The game on the line, you have to be absolutely sure you can make the catch. If you can't, just make sure you keep the ball in front of you. It's what you're taught in Little League, for chissakes. At a time when discretion should be the better part of valor, Carrera wanted to be a hero and make the highlight reels. He ended up as one of the goats.

Alex Avila remained out of the lineup a second straight game due to his concussion symptoms. Bryan Holaday getting the start behind the plate. To the Tigers' credit, they are not going to allow Avila to play until the post-concussion symptoms subside.

Nick Castellanos was a late scratch for Detroit. The rookie third baseman is banged-up thanks to fouling a ball off his left foot during last night's game. Don Kelly, who was originally in the starting lineup playing center field, was shifted to third. Rajai Davis was inserted the Tigers' lineup as the center fielder.

Ian Kinsler is gonna Ian Kinsler and be over-aggressive on bases. It's who he is. Good Kinsler - Detroit's second baseman lead off the first with a looping single to center. Bad Kinsler - He was easily thrown out at second trying to stretch the single into a double.

The Tigers didn't have an other until the fourth, Torii Hunter beating out an infield single. Twins' shortstop Eduardo Escobar was injured on the play, forced to leave the game after landing awkwardly while making a diving stop. Eduardo Nunez took over for Escobar, whom the Twins are saying has a jammed shoulder.

The Twins got on the scoreboard in the bottom of the fourth, helped by some shaky outfield defense from the Tigers. J.D. Martinez and Rajai Davis both went to the base of the wall on Kennys Vargas' drive to left center, which allowed the ball to carom off the fence and back into center. Davis wasn't even able to make a throw once he ran the ball down, due to overrunning it.

Brad Ausmus loves the questionable strategy of pulling his infield in early in games. Varga on third and one out, that's just what Aumsus ordered. Kurt Suzuki hit a ground ball past Andrew Romine, who was stationed on the inside lip of the infield, for an RBI single. If Romine was positioned normally, the run still scores, but the ground ball is a 6-3 putout.

Twins' starter Ricky Nolasco entered the game owning a 5.64 ERA, 4.40 FIP and 1.553 WHIP, not that you would have known it by the Tigers' bats. Thanks to Ian Kinsler being thrown out on the bases and double plays in the second and fourth, Nolasco faced the minimum through four innings. Through six frames, it was just one over the minimum.

Vargas' huge game continued after two were down the sixth, taking a Rick Porcello off-speed pitch over the right field wall. Vargas' solo home run was his eighth of the season, increasing the Twins' lead to 2-0.

Nolasco was pulled after eight innings and 109 pitches. It was if the Tigers were given a breath of fresh air in seeing another arm, in this case Twins' closer Glen Perkins. One out, the Tigers put the tying runs on base when Torii Hunter dropped a bloop double into left center and Miguel Cabrera followed with a single. Down to their last out, J.D. Martinez went to the opposite field, drilling a three-run home to right, giving the Tigers a shocking 3-2 lead.

But Joe Nathan and Ezequiel Carrera combined to blow the game in the bottom of the ninth. After retiring the dangerous Vargas, Nathan walked Trevor Plouffe. Doom soon followed. Kurt Suzuki drilled a line drive to center which Ezequiel Carrera turned into an RBI double while tying be a hero. Pinch-runner Chris Herrmann on third and two out, Aaron Hicks sent a high chopper back up the middle, beating out Andrew Romine's desperation throw for a game-ending RBI infield single.

Kennys Vargas' triple in the fourth inning was the first three-bagger of his young Twins' career. Vargas ended his game a double shy of the cycle.

Martinez's eight home runs in the ninth inning ties him with Alex Rodriguez (2007) for the second most in a single season since 1914.

Thanks to Martinez's home run, the Tigers have come back from behind to take the lead in the 7th inning or later four consecutive games. Tonight was the first game where they coughed the lead back up.

While the Tigers were struggling in Minnesota, the Baltimore Orioles were clinching the AL East division by beating the Toronto Blue Jays and the Washington Nationals nailed down the NL East by knocking off the Atlanta Braves. After the Tigers' fast start to the season, most fans figured they would be celebrating a division crown about this time. No such luck.