The division is still on the line on the final day of the regular season. Will the Tigers win the AL Central?

Share All sharing options for: Game 162 Preview: Twins at Tigers

Is there a "rookie wall?" If so, Kyle Gibson might be hitting it. Sure, Gibson isn't technically a rookie after logging 51 big league innings in 2013, but the 26 year old right-hander has already thrown 20 more total innings than he did last year. He has given up four runs in three of his four September starts, resulting in a 6.26 ERA this month. This comes after giving up a 5.19 ERA in six August starts, but he had a 3.65 FIP during that month. In September, that figure has risen to 4.13, and would be much worse had Gibson not struck out eight Diamondbacks hitters with no walks in his last start.

The losing pitcher in that matchup? David Price, who allowed five runs on eight hits in 5 2/3 innings. Price bounced back with a vengeance in his last start, cruising through eight shutout innings against the Chicago White Sox. Of course, fans will be more likely to remember the ninth inning, when he gave up three runs. Price continued to pound the outer half of the strike zone against right-handed hitters, something that the Twins would theoretically be better equipped to take advantage of. 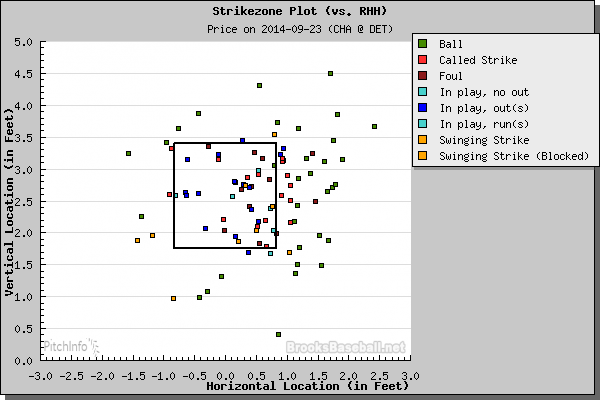 Brian Dozier has killed the Tigers in this series, collecting six hits and five RBI in 14 at-bats. This includes a pair of towering home runs, giving him four against the Tigers this season. Dozier also has a pair of home runs against Price in his career, one of which came earlier this year when Price was pitching for the Tampa Bay Rays. Trevor Plouffe is the only other Twins hitter with some previous success against Price, but he is out for the season with a broken arm. Joe Mauer has reached base seven times against Price in 24 plate appearances, but has also struck out six times.

The Tigers probably did not have this in mind when they acquired David Price in July. Price was, in theory, brought in to help the Tigers run away with the AL Central and bulldoze the competition in the playoffs. Instead, here we are. It's comforting to know that the Tigers will have one of the best pitchers in baseball on the mound this afternoon, but Price's previous outing against the Twins is a little concerning. However, the Tigers have responded to adversity at every turn this season, and I don't see any reason why today will be any different.