Painting the postseason predictions by the numbers

Let's look at a bunch of seasonal team statistics and see who the postseason favorites really are.

Share All sharing options for: Painting the postseason predictions by the numbers

There's really no sense trying to predict what will happen in the postseason. Despite every attempt to crunch all available numbers to the nth degree, baseball (in short bursts, at least) remains an unpredictable game that defies our best endeavors to forecast future outcomes. But our human nature craves order, and so we sort through the chaos and try to find patterns that make sense. Perhaps Billy Beane said it best: "my sh*t doesn't work in the playoffs."

Still, rather than write a six thousand word dissertation on postseason miracles that left our mouths hanging open, let's talk a walk down the hallways of Reason and Rationality, and see what we can discover from the 2014 regular season statistics.

In theory, teams that score more runs than they allow will win the most games. In practice, of course, there are caveats, as this chart shows: 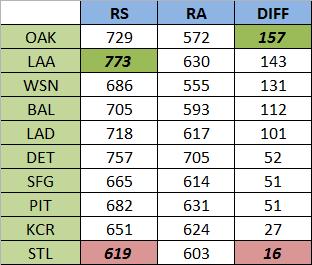 The A's had the highest run differential of all the postseason teams this year, but the caveat is that they scored 64 percent of those runs in the first half of the season. Their near-total collapse in the second half left them tied for the worst overall win/loss percentage of all the teams that made the postseason.

The Angels scored the most runs overall, but they also allowed the third-highest number of runs of the postseason teams.

The Cardinals stand out here as the team with the worst run differential, and yet, as we will see in the next chart, they also made the most out of that differential.

Based on the number of runs scored and runs allowed, the Pythagorean calculation gives an idea of what a team's win/loss record should have been. I did a study last year on the relationship between Pythagorean performance and World Series winners and found that 80 percent of the World Series winners in the last 30 years were teams that out-performed their Pythagorean Expectation. So which postseason teams performed the best based on their run differential this year?

And now, a short commercial break while we stare disbelievingly at Oakland's incredible choke-job.

Part of putting up good season numbers that out-perform a Pythagorean projection is performing well in one-run games. In the postseason, where runs are at a premium and solid pitching usually rules the day, teams that can win in one-run games tend to go further in the postseason. In fact, my 2013 study showed that 12 of the last 15 World Series winners had a better-than .500 win percentage in one-run games, so let's take a look at those numbers next. 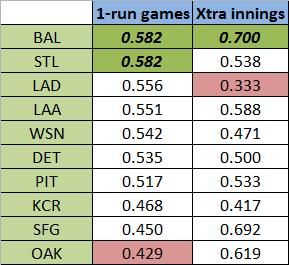 It's not surprising to see the Cardinals so high on the list of teams that win in one-run games, given what we've already seen in their Pythagorean numbers. What may be a bit more enlightening, however, is to see the Orioles topping the charts in both categories. For whatever reason, whether it be solid bullpen performances or clutch hitting, the Orioles haven't lost many extra-innings games this year, and they've done quite well in one-run situations as well.

The Tigers are a coin-flip in extra innings, and slightly better than a coin-flip in one-run games, but there is a caveat to that first column: there were a couple of games this year that weren't one-run situations going into the ninth inning, but turned into one-run games when the bullpen narrowly avoided blowing the game.

Who's hot and who's not?

Whether or not you believe in momentum, it can be interesting to look at these teams and see how their first-half and second-half performances stack up. 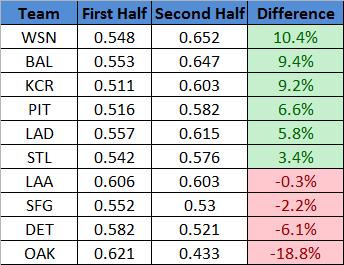 The Nationals and the Orioles are riding the hottest streaks going into the postseason this year, and these numbers also clearly reflect the difference between the Tigers' hot start and water-treading finish.

One more thing to point out in these numbers: the Dodgers, Cardinals, and Angels appear to have been the most consistent, even-keeled teams headed into the postseason. That may or may not be a predictor of future performance.

One other important set of numbers to consider: in the upcoming first round of the postseason (ALDS, NLDS, and wild card games), how did these teams perform against each other during the regular season? 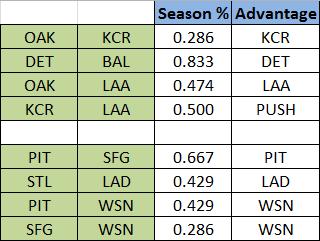 Again, there are caveats here, as there always are. The Tigers beat up on the Orioles in the regular season, but they also played their last game against Baltimore on May 14, when they were playing .667 ball and the Orioles were playing .526 ball. Since that last meeting, the Tigers played .524 ball, and the Orioles played .613 ball, so take these numbers with a grain of salt.

Still, if match-up magic means anything, we could easily be looking at an ALCS featuring the Tigers and Angels, and an NLCS match-up featuring the Dodgers and Nationals.

By converting Vegas payouts into probability percentages, we end up with this ranking for the 2014 World Series favorites: 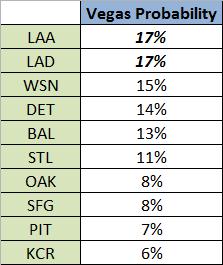 And now we come full circle. The one thing that stands out here is that no single team is a clear favorite. The odds are close and tight, and the Tigers are right there in the top five favorites. What is the point? That the postseason is unpredictable chaos, anything can happen, and you should probably not bet on either the Royals or the A's this year.