Share All sharing options for: Game 143 Preview: Giants at Tigers

Many people wrote Tim Hudson off after he missed the final two months of 2013 with a broken ankle after being stepped on at first base. Hudson's superficial numbers didn't look great prior to his injury -- he was just 8-7 with a 3.97 ERA for an Atlanta Braves club that won 96 games -- but his peripherals suggested otherwise. He put up a 3.46 FIP and had a 2.64 strikeout-to-walk ratio, both of which were better than his career norms. The Giants must have seen this, because they signed the then-38 year old to a two year, $23 million contract last offseason.

Hudson has rewarded the Giants' faith with an excellent season, allowing a 3.08 ERA and 3.45 FIP in 172 2/3 innings. His strikeout rate has never been very high, but Hudson has compiled the lowest walk rate of his career en route to a 3.70 strikeout-to-walk ratio, the highest of his career. Hudson granted Fangraphs' Eno Sarris an in-depth interview about his pitching arsenal, and how his age may be helping him to be a more complete pitcher.

Maybe it’s just doing so well this year because his control has been so other-worldly. His career walk rate is better than average, but this year, he’s fourth in the league in that stat. "Getting ahead of hitters more," Hudson said, but that can’t be all of it. His current first-strike rate (63.4%) is better than the league average (60.1%) and his own average (60.3%), but not by enough to explain halving his walk rate. Maybe it’s instead about that career-low fastball velocity (89 mph). "I don’t have anything really overpowering, so I’m not overthrowing much," he said. "My command is better because I’m more under control and my delivery is more consistent."

That entire piece is well worth your time. Be sure to click over sometime today.

Kyle Lobstein was brilliant, if inefficient, in his last start, allowing two runs on five hits in 5 1/3 innings. He struck out 10 batters and walked three, dancing out of trouble numerous times to preserve a slim deficit that the Tigers would later overcome in a 4-2 victory. J.D. Martinez's ninth inning heroics capped off the comeback, but without Lobstein keeping the Indians in check, Martinez would have never even gotten the opportunity to play savior. Lobstein made Terry Francona pay for his lefty-heavy lineup, utilizing his slider to get eight swings and misses on just 28 pitches. 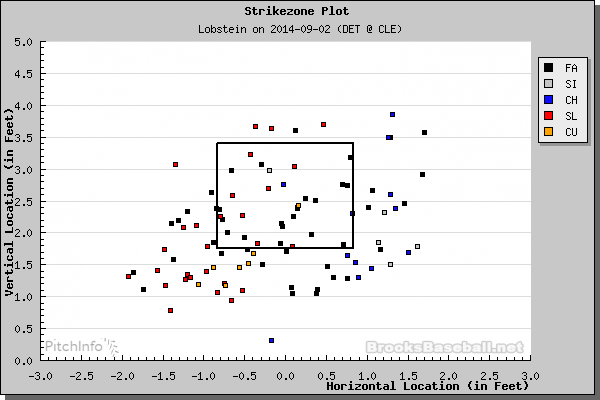 Hudson has not pitched in the American League for a decade -- did anyone realize he played in Atlanta for nine years?! -- but still has plenty of experience against a pair of Tigers hitters. Miguel Cabrera has found the most success against the 39 year old right-hander, collecting 12 hits in 28 at-bats. The only Tiger with more career plate appearances against Hudson is another 39 year old, Torii Hunter. Hunter is 10 for 29 with three extra base hits against Hudson in his career, but most of those matchups came when Hudson was pitching in Oakland from 2000 to 2004.

Excuse us if we're a bit pessimistic about this one. Kyle Lobstein has not yet faced a pitcher like Hudson -- though Carlos Carrasco was no slouch five days ago -- nor a lineup like the one the Giants will put out tonight. His 10 strikeout performance against the Indians was impressive, but the Giants are among the league leaders in nearly every offensive statistical category since the All-Star Break. If the Tigers are going to pull this one out, they will need to get to Hudson, who has admittedly been somewhat ineffective lately. He has given up five runs in two of his last four starts, and has a 4.59 ERA since August 1st.

Hudson stymies the Tigers' offense and the Giants sweep.