The average age of a player making his major league debut is around 24 and a half years of age.

Having made his big-league bow at 21, big things were -- and probably still are -- expected of the 6’4" right-handed bat from Florida.

It’s quite possibly these expectations that have played a part in his admittedly disappointing production to date. However, I stress again, Castellanos already has 1,100 at-bats to his credit at an age where most prospects his age are still honing their craft in Double-A.

He needs to be shown time and patience and I’ll attempt to explain why.

One of the most intriguing pieces of analytical data available on any player to me is their "by age" comparison; basically who, at the same age in their respective career, is the closest match statistically to the subject in question. In this case the Tigers incumbent third-sacker.

It may surprise many to know one of Nick Castellanos’ closest comparisons (per Baseball Reference similarity score) through his age is none other than Chicago White Sox skipper Robin Ventura, and I think we can safely surmise his career didn’t turn out too badly in the end.

Does that mean Castellanos is destined for as stellar a career as Ventura? Of course not, however it does help put the current situation into some kind of context.

The man who actually comes out on top is Mike Moustakas and it’s his career path that I find most intriguing in relation to Nick.

Of these ten, six were All-Stars either once or multiple times throughout their careers, and one in Dale Murphy was a two-time MVP.

Anyway, back to my point about Mike Moustakas and just how eerily similar his and Nick’s career paths have been to date.

Here’s some tabular data showing their respective statistics from their first and second years in the majors (full years) as full-time everyday players.

Very similar outputs as you can see. Moustakas too was a first rounder, second overall actually, so maybe he too felt the enormous pressures that are sure to come with that status.

Quite the significant advantage for Castellanos in their respective second full seasons of big time ball in all five categories I’ve looked at here.

Now we move on to the third year, which was 2014 for Moustakas and as yet hasn’t happened for Castellanos, so for that we’ll defer to Steamer:

It’s clear Steamer is backing Castellanos to follow up the second half of last season and have a much better third year in the show than Moustakas had for his. How much credence you give to projection systems such as Steamer is up to you, but my own research tends to suggest they are more accurate than not when the full picture is taken into account.

That then brings us on to Moustakas’ fourth year in the league, that of 2015, and here’s what he put up:

Finally, as people had predicted from the off, and to the relief of the Royals, Mike Moustakas broke out and became the player many thought he would always be. Now he may follow this up in 2016 (Steamer has him putting up a tad less numbers-wise, yet still very productive) or he may not, yet the salient point is this; it can often take time for prospects hitting the league so early to adjust, and to adjust again to the league's adjustments to them. Sure, you get the Kris Bryant’s and Carlos Correa’s who come in and tear it up from the off, but they are the exception and not the norm.

What gives me great hope, the Moustakes comparison aside, are the adjustments Nick made in the second half of 2015. His contribution can be almost evenly divided between the first and second half in terms of really coming alive and here’s the evidence.

But just how did Castellanos come about such improvement?

Looking into his advanced data on Brooks Baseball, a couple of things jumped out straight away. 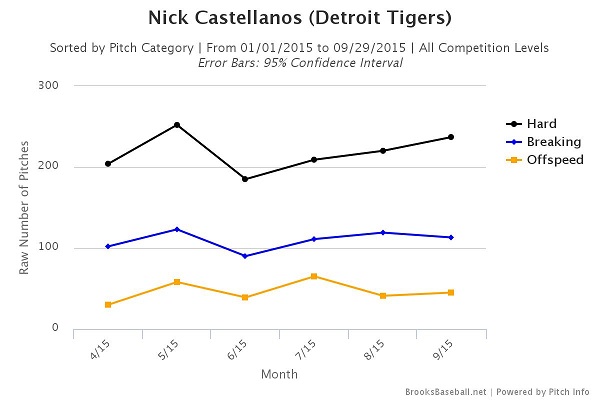 Firstly, he simply started taking more pitches. The above shows quite a distinct change in plate patience from the middle of June onwards. More pitches equals more good pitches to hit equals more walks equals more OBP equals more wOBA, etc. There was a clear and conscious effort made to be more picky about what to swing at in the second half of the year, and it quite obviously helped a lot.

Secondly, because he was showing this extra patience, this allowed the pitches he did swing at to be hit much harder than before. His second half exit velocity improvement is quite clear. 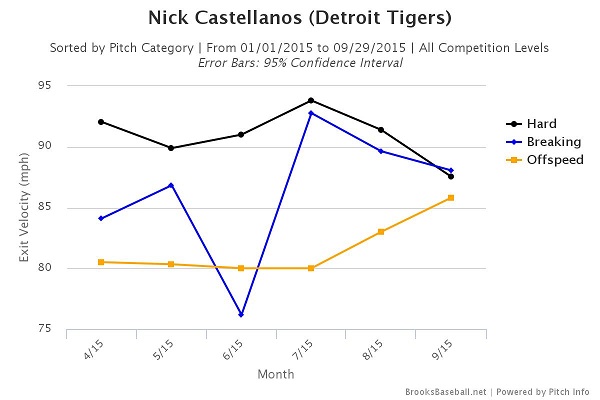 There was indeed a slight decrease in fastball exit velocity, but this is still relatively steady and hugely offset by the far harder and more regular contact he was now making in the second half on the breaking and offspeed stuff.

This is in turn led to his line drives per ball in play climbing rapidly: 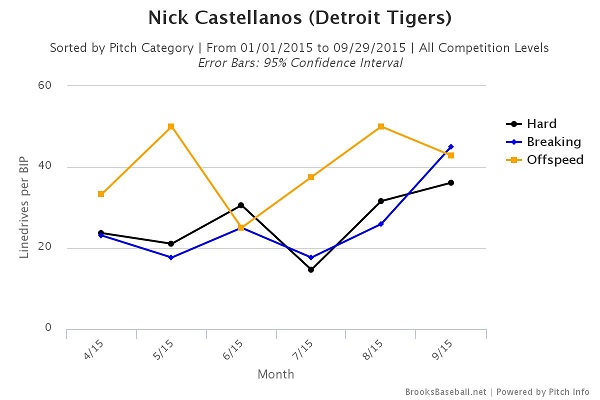 Quite simply, he was hitting the ball more often and much harder than he had been in the first half of the year, and I would suggest a lot of that is down to showing more patience and simply waiting for better pitches to hit, as the first table would indicate.

The last piece of evidence I offer to tie all this up is his zone profile for the percentage of whiffs per swing. Look at his first half: 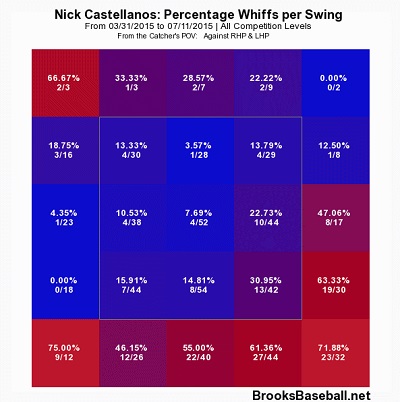 Then compare the amount of red squares outside of the strike zone to his second half: 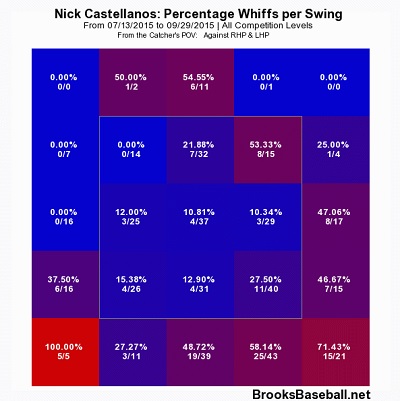 A marked difference, despite the low and in pitch still causing him most problems. He struck out far less on poor pitches to hit in the second half of the campaign and benefited to the tune of harder hit balls when he got his mistake.

Let’s be honest, no one knows for sure what kind of year Castellanos is going to give the Tigers in 2016, but looking at the adjustments he clearly made through 2015, and the empirical evidence we have in the Mike Moustakas comparison, I would suggest he could be very close to breaking out and becoming the player we were all told he would be, just like Moustakas appears to have done.

One thing is for sure, at 23 years old, it’s way too soon to give up on such a vaunted first round pick and the signs are there that at last, Nick Castellanos could be rounding into the third baseman the Detroit Tigers want and need him to be.