Justin Verlander's fastball failed him in 2014

Normally his bread-and-butter pitch, Verlander's fastball was not up to its usual standards last season.

Share All sharing options for: Justin Verlander's fastball failed him in 2014

One of the more famous scenes in the movie Bull Durham comes when catcher Crash Davis and pitcher Ebby "Nuke" LaLoosh get into an argument during a meeting on the mound. LaLoosh, a young, hotshot pitcher, wants to throw a first-pitch fastball. "I want to give him the heat and announce my presence with authority!" is the famous line LaLoosh delivers. Davis, played by Kevin Costner, relents, but tells the opposing batter that the next pitch he will see is a fastball. The batter promptly deposits the pitch into the stands for a home run.

Justin Verlander didn't exactly tell opposing hitters what was coming last season, but there were starts where he might as well have been. His fastball, in particular, was neither authoritative nor effective. Opposing batters hit .283 with a .454 slugging average off his fastball last season. The average was his highest allowed on fastballs since 2008, while the slugging average was the highest allowed of his career. Twelve of the 19 home runs he allowed last season came off the fastball.

Given how ineffective his fastball was in 2014, it comes as no surprise that Verlander threw a fewer perecentage of fastballs compared to any other season in his career. His 56.2 percent fastball usage rate was down slightly from 56.5 percent in 2013, and well below 59.5 percent for his career. However, throwing that many fastballs still got Verlander into trouble in 2014, as he allowed a 4.54 ERA and 1.40 WHIP in 206 innings. 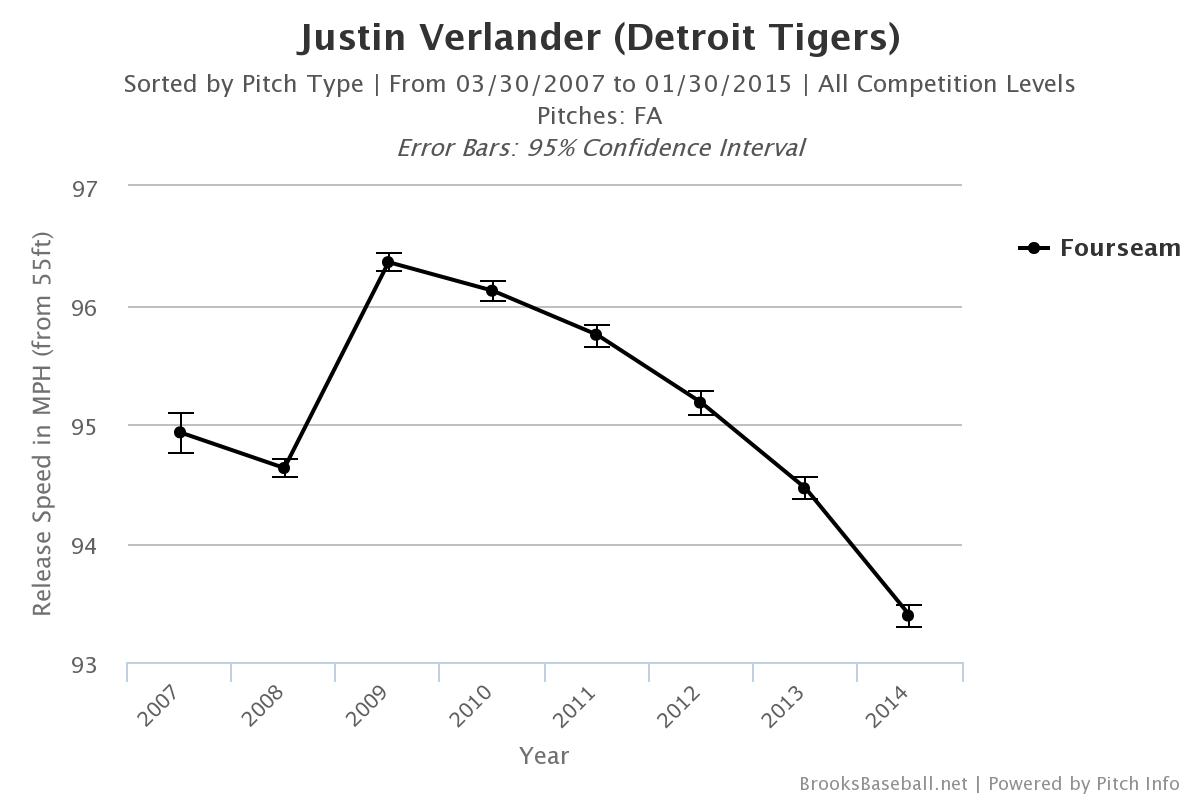 While we only have PitchFX data dating back to 2007, it seems safe to assume that the 2014 season resulted in Verlander's lowest average fastball velocity of his career. While a 93.4 mile per hour fastball is still quite good for most major league pitchers, it is nowhere close to the Verlanderian standards we have come to expect.

Average fastball velocity can be misleading, though. As we see in the graph above, Verlander's fastball has declined every year since 2009. Verlander himself certainly hasn't been declining during that stretch, so what happened? Part of the dip in velocity has been by design. Verlander has admitted to scaling back his fastball early in games in order to conserve stamina for the later innings.

As Verlander's fastball velocity has declined, the movement on his fastball has also declined. This may seem counterintuitive in a sense, but probably depends on his grip and arm action. There have been hints of Verlander toying with a two-seam fastball, but Brooks Baseball has classified everything he throws as a four-seamer. The decline in movement would make sense if it had happened in 2014, or even 2013, but the sharpest dip in horizontal movement actually came between 2011 and 2012.

Regardless of why Verlander's average fastball velocity and movement have declined, he should be able to dial up the heat when necessary, right? He has been able to do so for most of his career. However, Verlander's peak fastball velocity has dipped in the last couple seasons, bottoming out at 99.2 miles per hour last year. It was only the second season in which Verlander has not reached triple digits with his fastball.

The high heat in 2012 and earlier were not one-time deals, either. Below is a table detailing the number of pitches Verlander has thrown at 100 miles per hour or faster in each season since 2008. The numbers may be slightly off from the graphic above, as they are from Baseball Savant.

In short, it's safe to say that Verlander's fastball velocity has truly declined in the past couple seasons. Whether this is related to his core muscle repair surgery or age-related decline is still not certain.

Velocity isn't everything, though. Bruce Rondon was decent in his rookie season, but not a revelation. There aren't many pitchers in baseball, save for Aroldis Chapman, who get away with throwing nothing but pure gas. Throwing strikes and locating the fastball within the strike zone is essential for a pitcher to be effective at the major league level, even one who can throw as hard as Verlander. This is where he struggled the most in 2014.

Consider the image above. This is a heat map (courtesy of Baseball Savant) of every fastball Verlander threw in 2013. He landed the majority in and around the strike zone, and peppered the third base side of home plate. Verlander tends to work this side of the plate with his fastball against both righties and lefties. Opposing fans have dubbed Verlander's ability to get outside strikes called against left-handers a "Verlander strike." Dotting a fastball six inches off the plate has fooled many an umpire, and it was something he did with a fair bit of regularity in 2013.

This did not happen as often in 2014. Verlander struggled to work that side of the plate, instead focusing more on the first base side. The slightly darker areas above and to the right of the strike zone also show that Verlander was missing on a lot of his pitches. The relative lack of pitches to the third base side of home plate indicates that he was consciously staying away from that area. We saw yesterday how much better right-handers fared against Verlander in 2014 relative to his career numbers. The fastball location seen above could be a reason why; if Verlander is unable to work inside, righties would have free reign to lean out over the plate for a belt-high fastball, leading to the unsightly numbers we saw.

A quick look at the splits shows that Verlander tried to work more towards the first base side against both righties and lefties. Why was this the case? This is not clear, but given the sudden shift from working towards his arm side to working the other way, my guess is that it was mechanical. Given everything we know about how his season unfolded, this continues to roll into the "Verlander was not fully healthy" theory. However, a cursory glance at his release points reveals very little information on what could have happened to cause such a change in his fastball velocity and location in 2014.