What's wrong with J.D. Martinez, and how to fix it

It's not that the Tigers slugger doesn't know what's wrong, but finding the solution and putting it into practice are often two completely different things.

Share All sharing options for: What's wrong with J.D. Martinez, and how to fix it

DETROIT -- For all the talk of J.D. Martinez's revamped swing and a full season under his belt to get used to it, it's easy to tell something's not quite right. Martinez is swinging and missing with greater regularity, and when he puts the ball in play little comes of it. Which is cause for concern for a Tigers team suddenly lacking pop in the middle of its lineup.

A promising start to the year, with five home runs in his first 11 games showing the elite power is still there, has gone flat in the two weeks since. The 27-year-old righthander batted .281 as late as April 23 but entered play Saturday against the Royals on an 0-for-25 slump and carrying a .216 average. He struck out 16 times -- an astounding 64 percent of the time -- during that slump. But despite Martinez's significant struggles this year, manager Brad Ausmus doesn't believe that Martinez's mechanics are the issue. In fact, he thinks it may be the only thing not wrong with Martinez.

"He's just chasing more pitches, I think is really the big thing," Ausmus said. "Mechanically, he doesn't look any different. He still looks like he's got a good stroke. If you watch him in BP, he swings the bat well. I just think he's chasing pitches out of the zone that he can't hit."

Martinez is undoubtedly struggling with plate discipline. He's letting pitches pass through the strike zone at nearly the highest rate of his career, yet he's offering at more pitches outside the zone than ever before, according to PitchF/X plate discipline data at Fangraphs. When he swings, he's making less contact than ever, resulting in the highest rate of swinging strikes in his career. 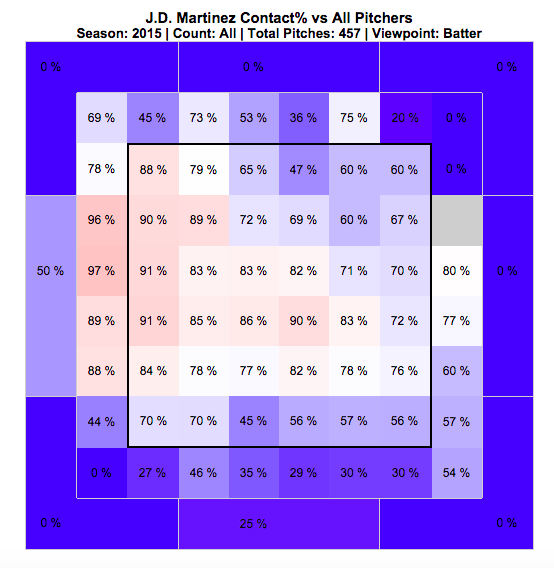 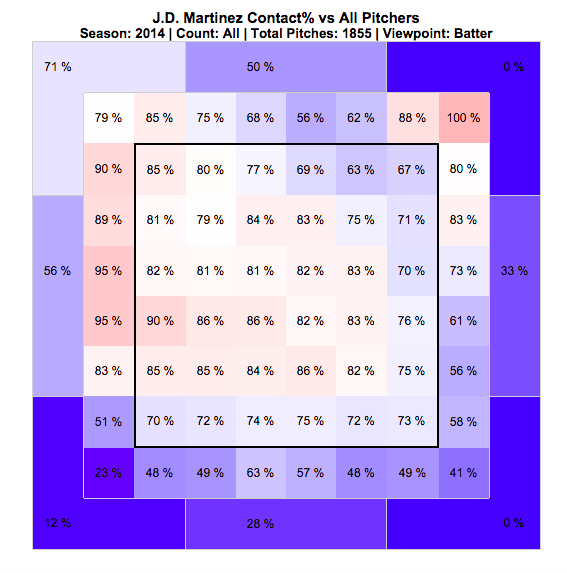 If it sounds exhausting, it is. Physically, emotionally, and particularly mentally, Martinez remarked. He's spent countless hours reviewing video, breaking down every part of his swing and how opposing pitchers are attacking him. What Martinez noticed was that while pitchers hadn't changed their approach against J.D., something had changed with Martinez.

The issues went all the way back to spring training this season. While Martinez was busy smashing six home runs in Lakeland, he was off. It wasn't noticeable because of the pitches he was destroying, but then again pitchers aren't exactly trying to pitch a shutout -- they're focusing on specific issues in preparation of the regular season.

Mistakes are made with regularity during spring training, and some games were more akin to batting practice than actual game situations. That doesn't make for an accurate assessment of issues a player may have identified. It didn't matter what the results were, Martinez knew something was wrong in Florida.

"It's not my confidence," Martinez said. "It's not me going up there and thinking I'm going to get out. It's me going up there and fouling off pitches. It's very simple. I know what it is. Now, it's just getting back to the grind and breaking stuff down. Like I said, I've got a lot of bad habits that I was doing in spring training, and yeah I had success, but the feeling wasn't there. So now it's just getting that feel back. Once you get it back, you got it."

Of bigger issue than his rate of swinging strikes, however, are the pitches that Martinez is most likely to make contact with are the ones he's finding the least success on -- up and inside. This has always been the zone he hits best in, even in his dismal 2013 season. Throw him a pitch high and inside in the strike zone this season and there's about a 90 percent chance Martinez makes contact. If you're the pitcher, this is a good thing. 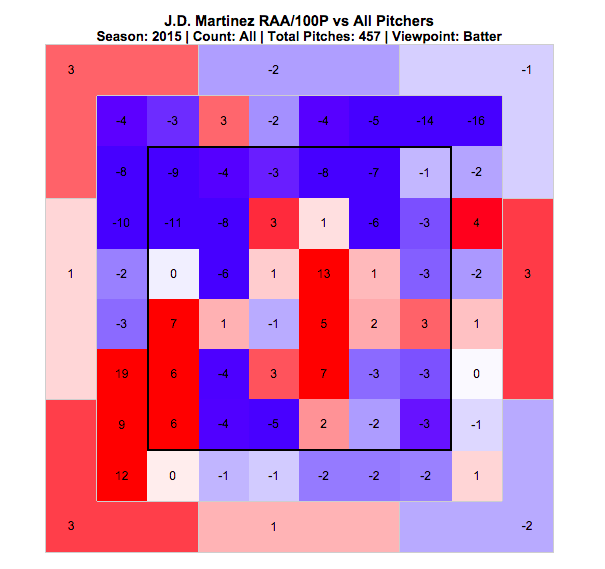 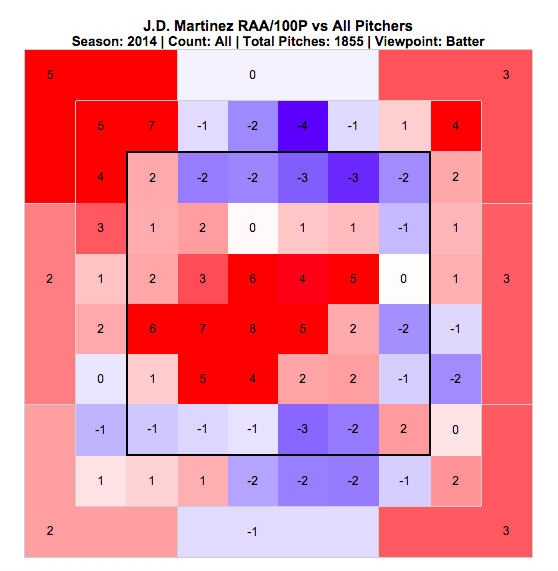 Actually in 2015, just about anywhere has been a safe place to put a baseball with Martinez at the plate. While he made a good living on pitches down the middle last year, there are only smatterings of zones on the heat map that he's been successful there this season. Throw the ball anywhere up in the zone, Martinez is probably going to turn it into an out. Throw it anywhere down in the zone, Martinez is going to swing and miss.

"Now the pitcher throws everything, breaking  balls and stuff like that, and you don't recognize it. Once you're not late on the fastball and you let the ball travel, now you recognize a lot more pitches and you can go from there."

Fastballs have been a particular problem, as they were for most of his career, but curveballs have been an issue as well. In 2011-13, Martinez was about a half-run worse than average per 100 pitches at hitting the fastball. In 2014, that trend reversed and he hit about a run better than average when seeing fastballs. The curve, which Martinez had hit for above-average success his entire career, has suddenly become a pitch worth 3.6 runs worse than average per 100 pitches.

While it's too early to say those trends are ready to reverse, there have been at least a few signs the past few games that things are changing. The first -- Martinez is actually starting to take walks. In the past four games alone he's taken seven walks. In the first 26 games he walked four times. Saturday, he broke the 0-for-25 streak with a drive to the opposite field, but it wasn't that he got a hit, but how.

In plate appearances leading up to Friday night's battle against Wade Davis, Martinez has been dealing with a hiccup between his lower and upper half. Watching a Martinez at-bat often gives the appearance of a lack of fluidity in his swing, but Friday night and in Saturday's game, the disconnect had all but disappeared.

Compare his swing in September 2014 with those in his last few at-bats, and there is a similarity. Martinez knocked a pitch several inches out of the strike zone in the second inning but it was one he followed through with commitment, as were his two previous swings. There was no hesitation or "skip" between the lower and upper half of his body mid-swing.

"I definitely think I'm closer to figuring it out," Martinez said. "I think it just starts with little adjustments we've been making. We've really been breaking down film, getting to where I was last year, with my hands and my load. I think that a lot of stuff got tinkered (with) a bit, and with my success early, it was kind of on the borderline where you could see I wasn't comfortable in the beginning, but I was having success, so it was hard to change when you're having success."

That Martinez continues to hit liners is another good sign, and one that he may be getting a bit unlucky on balls in play. He's carrying a 27.1 percent line-drive rate while hitting for a career-low .281 batting average on balls in play. Those two numbers don't go together, so you expect over the course of the season those liners are going to result in some hits.

Martinez admitted that he's gotten wrapped up in his own head at times, which may have also contributed to overthinking the entire process. But when a player is continually trying to break or fight bad habits that don't seem to want to go away, the mind can be a tough thing to fight. Only Martinez knows if he's found a solution, but his last few at-bats are giving hints that, perhaps, he may be figuring a few things out.

"You never want to go up there and (doubt yourself)," Martinez said. "It's hard because when you have bad habits, and you know what you're trying not to do, it's hard not to think about it. Hitting's fun when you're not thinking about your swing. It's fun when you're up there competing."