After beginning the season in the minors, Kyle Lobstein might be pitching his way into a spot in the Tigers' rotation.

Share All sharing options for: 3 reasons why Kyle Lobstein could stick in the Detroit Tigers' rotation

You could argue that Kyle Lobstein has been the Detroit Tigers' best pitcher so far this season. Through five starts, Lobstein has a 3.00 ERA, the second-best mark in the Tigers' starting rotation. He has three wins, tied for the second-most on the team. He has yet to allow a home run, resulting in a rotation-leading 3.25 FIP. He is also the only Tigers starter to last at least five innings in all of his starts.

Not quite, but there are some very encouraging signs that his strong numbers this season are actually sustainable.

1. He is throwing his two-seam fastball more often

Surprisingly, this hasn't helped his overall numbers. Opponents are hitting .254 off him this year compared to .233 last season, and his BABIP has risen from .267 to .288. However, the high ground ball rate is limiting the opposition's power numbers. After opponents slugged .382 against him last season, Lobstein has given up a .302 slugging average in 2015. He still has yet to allow a home run -- resulting in a full run's difference between his 3.24 FIP and 4.29 xFIP -- and has only given up six doubles in 137 plate appearances.

2. He is working inside against right-handed hitters

Last season, Lobstein held righties to hitting just .245/.304/.382, but was somewhat aided by a .271 BABIP. This year, righties are faring slightly better at .286/.351/.343 in 77 plate appearances. He still has yet to allow a home run, but the .694 OPS allowed to right-handed batters is quite good, especially given how strong his numbers are against lefties. Lobstein is doing more than holding his own in this regard, and still has some wiggle room when opponents find their power stroke against him.

While the numbers aren't really any better in 2015, the process is. Lobstein is throwing his fastball on the inside half of the plate against righties this season after avoiding it entirely in 2014. This inside approach has paid dividends so far in the low power numbers, and should continue to do so throughout the season. 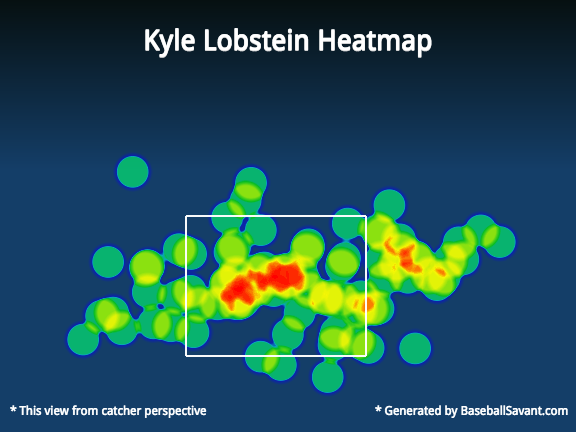 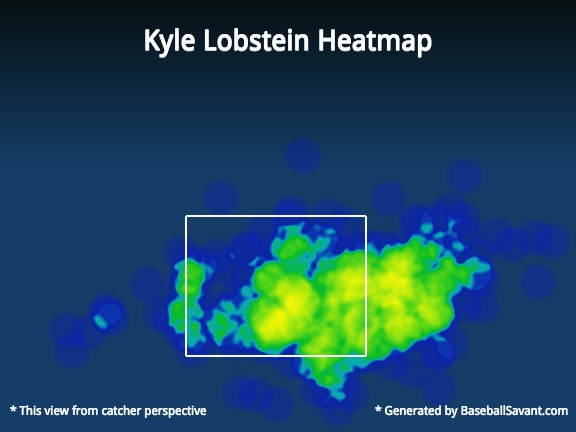 In a very small sample of innings, righties are hitting the ball on the ground 48.5 percent of the time, with a 15 percent pop-up rate. He is also generating more soft contact against righties than lefties, resulting in a measly .031 ISO off his two-seam fastball.

3. He is really good against lefties

This isn't anything new for Lobstein. He held left-handed batters to hitting just .217/.294/.326 last season, and they are batting .214/.267/.250 in 60 plate appearances this year. He is pounding the lower outside corner of the strike zone, and has induced a ridiculous 71.4 percent ground ball rate against lefties.

Specifically, Lobstein's increased breaking ball usage against lefties is a big reason why he's holding them to almost nothing. He has yet to throw a changeup to a left-handed batter this season, but is throwing his slider and curveball over 45 percent of the time, including early in the count. This has resulted in many hitters rolling over the off-speed offerings, generating a lot of weak contact to the right side of the infield.

Lobstein's performance so far in 2015 has been impressive, but we should not get carried away with our expectations. He will allow a home run at some point, and is still running into some lineups for the first time during what is still his rookie season. As opponents get more familiar with him, there will be more hard contact and more crooked numbers on the scoreboard. His 4.29 xFIP is probably the best barometer of what to expect at this point, though I think he could wiggle his way into a sub-4.00 ERA.

That said, Lobstein's hot start is not all smoke and mirrors. He has shown some legitimate reasons to be optimistic about his future, and will make the Tigers' pending rotation decision much harder than originally anticipated. Whether Lobstein remains in the rotation or not, he looks every bit the part of a major league pitcher, and should probably remain on the 25-man roster when Justin Verlander returns from injury.