David Price returns from his hamstring injury today against the Cardinals and their own lefthander, Tyler Lyons.

If you thought Shane Greene had it bad after leaving last night's start with an elbow injury, consider how Cardinals fans must (or should) feel about pitchers hitting. Cardinals ace Adam Wainwright tore his Achilles tendon when trying to run out a ground ball on April 25, and will miss the rest of the season. Lefthander Tyler Lyons has been tasked with replacing the three-time All-Star in the Cardinals' rotation, but his job may be in jeopardy. Lyons has given up seven runs (five earned) on 11 hits in just 9 1/3 innings at the major league level this year. His 4.82 ERA is slightly higher than his career 4.64 ERA, but better than his 5.76 ERA in 14 career starts.

There is more than meets the eye with Lyons, though. A lefty who works his fastball in the low 90s, Lyons has struck out 21.6 percent of the batters he has faced in his career. His strikeout rate has risen in each of his three seasons, topping out at 27.9 percent in a very small sample this season. He had a solid 3.27 strikeout-to-walk ratio last season, resulting in a 3.65 FIP in 36 2/3 innings. His slider is his out pitch, and for good reason. He throws it nearly 45 percent of the time in two-strike counts and has induced a whiff rate above 20 percent for his career.

Why the poor ERA numbers, though? Lyons has had a lot of trouble pitching with runners on base in his career. He only has 99 major league innings under his belt, but has held opponents to batting .230/.280/.391 with the bases empty. With runners on base, opponents are hitting a solid .265/.343/.430, and that OPS raises to .894 with runners in scoring position. It may be a mechanical issue -- though sometimes young pitchers also get flustered with runners on -- as Lyons' walk rate increases from 6.1 percent to 8.6 percent when a batter reaches base.

After tossing a complete game against the Kansas City Royals on May 2, the Royals turned around and hung 13 hits and five runs (four earned) on the Tigers' ace six days later. Price left the game with a hamstring injury in the seventh inning, but not before he was tagged by a rejuvenated Royals offense. Price continued to use his fastball heavily, but he threw 17 cutters in his last start, a season high. The increased cutter use could be due to a relative lack of fastball command, something he has struggled with compared to 2014. 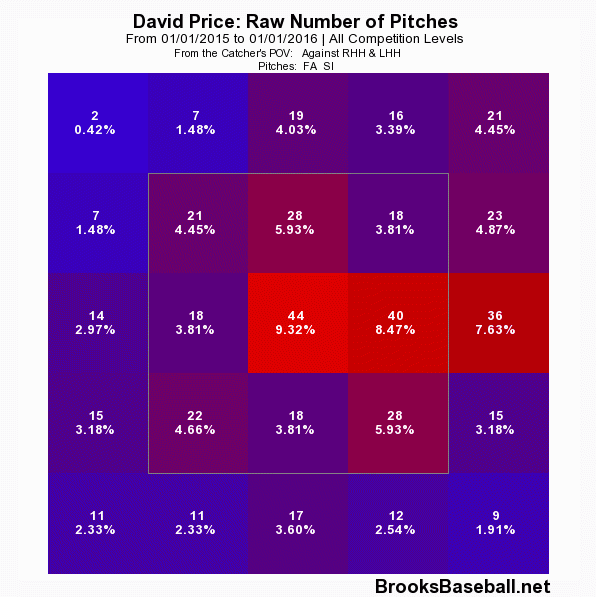 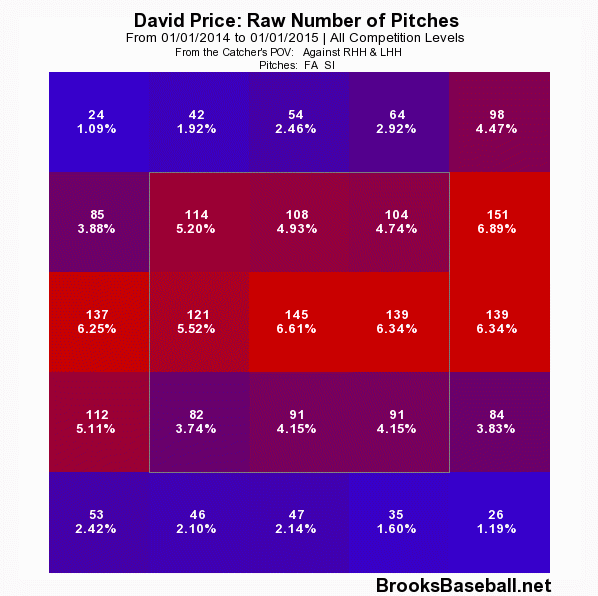 Price has only faced four players on the Cardinals' roster in his career, three of whom have seen extensive playing time in the American League. Former division rival Mark Reynolds has seen more of Price than anyone else combined, logging 35 plate appearances during his time with the Orioles, Yankees, and Indians. He has three home runs and four walks in 35 plate appearances, resulting in his usual high slugging percentage. Jhonny Peralta and Peter Bourjos have not been so fortunate, combining for just one hit and one walk in 27 plate appearances. Jason Heyward is 2-for-6 with an RBI.

After slogging through a rather prolonged slump in April and May, the Tigers' offense has broken out with 23 runs on 37 hits in their past two games. Miguel Cabrera has started to heat up, encouraging everyone else to do the same. The numbers suggest that this will continue today. Lyons has held left-handed batters to a .539 OPS in his career, but righties have hit .261/.321/.449 against him with nine home runs in 318 plate appearances. The Tigers should have an all-righty lineup today, aside from Price, and could be poised to do some serious damage at the plate.