Tigers' Nick Castellanos is struggling to adjust to MLB pitching

After showing flashes of promise in 2014, MLB pitchers have adjusted to Nick Castellanos. He has not adjusted back.

Share All sharing options for: Tigers' Nick Castellanos is struggling to adjust to MLB pitching

Throughout Nick Castellanos' rise through the Detroit Tigers farm system, fans were told about his immense offensive potential. While opinions varied slightly on just how high his ceiling was, many viewed Castellanos as a future .280-.300 hitter with 20-25 home run potential. He was (and still is) supposed to be a middle-of-the-order bat that will supplement Miguel Cabrera and company as the Tigers move into the latter half of the decade.

That rise to stardom hasn't happened yet. Castellanos is hitting .255/.301/.391 with 15 home runs in 773 career plate appearances in a Tigers uniform. However, he is still only 23 years old and less than two months into his second full season in the major leagues. There is plenty of time for him to find his groove and become the hitter that scouts thought he could become.

Many predicted that 2015 would be a breakout season for Castellanos. He showed flashes of potential last season, hitting .259/.306/.394 with 11 home runs and 66 RBI in 579 plate appearances. That predicted breakout has instead turned into a sophomore slump, and Castellanos is batting just .241/.290/.395 this year.

Last season, Castellanos displayed some interesting platoon splits. He hit for a higher average against right-handed pitchers, but walked more against lefties. His isolated power (ISO) was nearly identical against both righties and lefties. This season, those splits are a different story. Castellanos is hitting .320/.414/.460 in 29 plate appearances against left-handed pitchers, and .226/.265/.401 in 147 plate appearances against righties.

The drop-off in performance against righthanders is startling, but there is a reason for his decline. Last season, Castellanos hit .309 with a .462 slugging average against fastballs thrown by right-handed pitchers. He also did plenty of damage on pitches thrown on the inner half. This season, righthanders have adjusted. They are throwing more offspeed pitches, and pitching Castellanos away more often than in 2014. 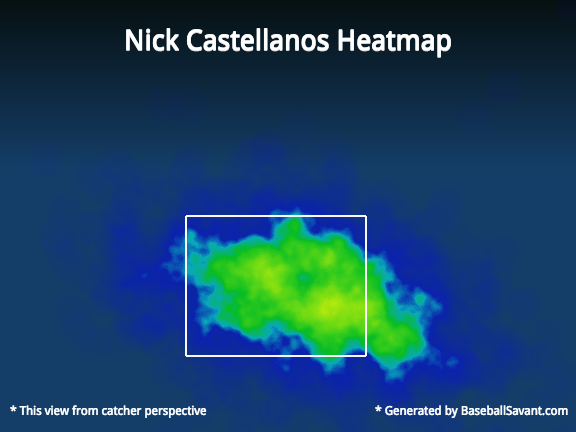 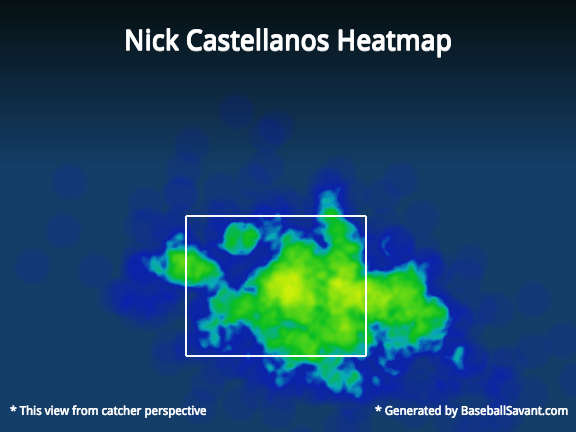 Castellanos has not helped matters. He is swinging at 38.8 percent of pitches thrown outside of the strike zone, a big increase from the 33.6 percent he swung at in 2014. His overall contact rate, one of the worst in baseball at 72.8 percent last season, has not improved much. He is making contact with a higher percentage of pitches outside the strike zone, resulting in a drop in his line drive rate and batting average on balls in play (BABIP). His swinging strike rate has risen to 14.2 percent, and he is having a lot of trouble laying off pitches down and away.

How does he fix this? Castellanos has shown flashes of his lofty potential during his MLB career, and has done very well when swinging at pitches on the inner half of the plate. However, until he can improve his pitch recognition skills and lay off the pitches he is swinging over on the outer half, pitchers have no incentive to work into his wheelhouse on the inner third. Castellanos could also look to punch the ball to the opposite field more often, something he has gotten away from in 2015.

While this trend is a bit concerning, I don't think it is time to worry about Castellanos yet. He is still only 23 years old and has fewer than 800 career plate appearances at the MLB level. He is still filling out his large, 6'4" frame, and has basically had to learn a new defensive position over the past year. As long as he can make the necessary adjustments and start laying off more pitches, we should start to see more of the Castellanos that everyone expected during his rise through the farm system.