One of Shane Greene's biggest weapons from 2014 is failing him this season.

Share All sharing options for: Tigers' Shane Greene needs to ditch his sinker

When the Tigers traded Robbie Ray for Shane Greene in a three-team deal last winter, many Tiger fans felt it was an upgrade. In a 78 2/3 innings with the Yankees in 2014, Greene had a 3.78 ERA and a 1.40 WHIP while striking out 9.3 batters per nine innings. With a 3.73 FIP and 3.41 SIERA, it looked like his ERA wasn’t luck-driven. There was hope that Greene could maintain his performance through the 2015 season and beyond.

Through his first three starts with the Tigers, that hope was kept alive. Greene pitched at least seven innings in each game while only giving up one earned run. However, in his next 11 major league starts, Greene only pitched past the sixth inning once. He allowed 50 earned runs in 49 2/3 innings for a 9.06 ERA. During that 11-start span, Greene had a brief stint in the minors, but that didn’t seem to help much. In his first start back with the Tigers, he gave up seven earned runs in 4 2/3 innings.

Of interest is that Greene also throws two other fastballs, a four-seamer and a cutter. Against the four-seamer, opponents are only hitting .225 (.194 this year) and .239 against the cutter (.243 this year). Yet, Greene continues to use the sinker as his primary fastball. Why?

When I change the criteria to show when a hitter has two strikes on them, the cutter becomes Greene's most frequent pitch, at 33.8 percent. It looks like he is using his sinker to set up his cutter, and also to induce ground balls for quick outs.

Unfortunately, it’s not working. At least, not as well as it was in 2014. While hitters were hitting his sinker at a high .318 clip in 2014, he was able to keep the ball down in the strike zone. This resulted in a very good 0.084 ISO against that pitch. In 2015, however, he's leaving his sinker up in the strike zone, and hitters are hammering it for an ISO of .229. 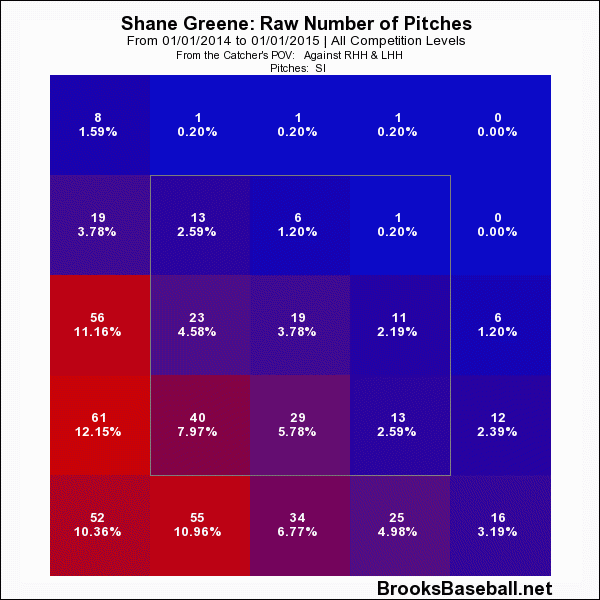 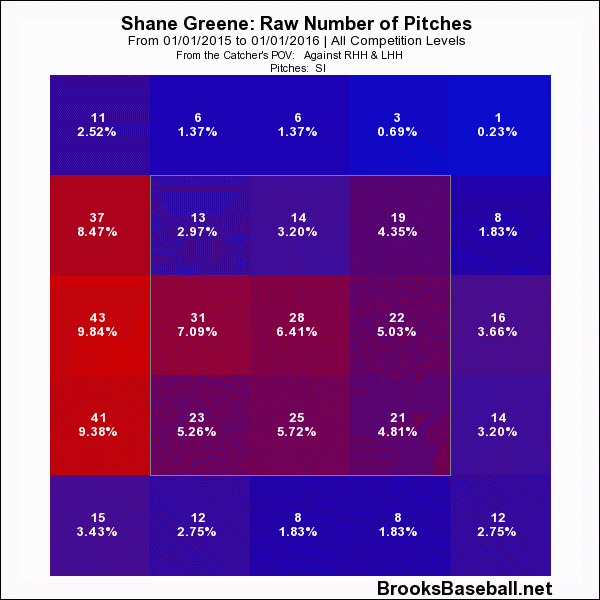 One solution for Greene's troubles could be to eliminate (or cut down dramatically) on his sinker usage. He could use his cutter or four-seamer as his primary fastball, at least until he can find his sinker command again. It certainly couldn’t make things much worse than they are already.